What a year Atlanta sports is having! It started with the Falcons blowing a 28-3 lead in the Super Bowl, continued with the Braves losing a bunch of prospects and getting spanked by Rob Manfred for violating international signing rules, and now the Hawks have sunken like a stone to the bottom of the NBA standings as this woman tosses her cookies live on television. General Sherman ain’t got shit on the job 2017 is doing to Hotlanta.

I bet this poor chick thought she could control that puke too. Probably got the spits like we all have at the bar, kept swallowing, threw the hands to the mouth just in case, and then PRESTO. Vomit right behind the worst team in the Association. I’m not sure if it was the booze, some fresh Atlanta sushi, or a stomach bug that caused this mess But I am grateful it happened and was all caught on video thanks to the internet gods.

However if the internet gods are in a giving mood tonight, I would appreciate it if they can give us a snippet with the reactions of this dude who realizes shit just got REAL in the fancy seats.

And these two sad sons of bitches who probably got a shit ton of puke on their Nikes. 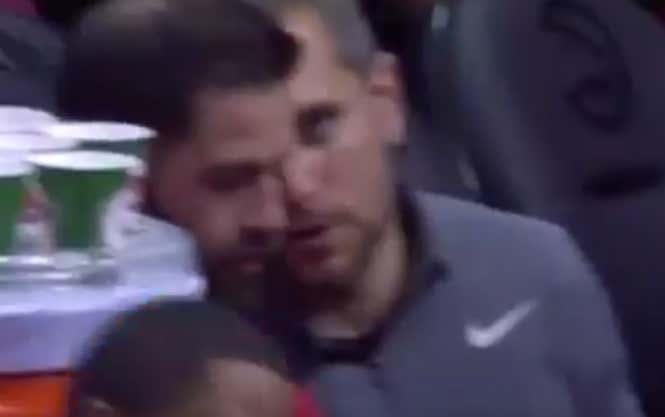 The only downside to this video is that this woman’s reversal of fortune likely didn’t land on Dennis Schroder. I randomly hate that dude with all of my heart.