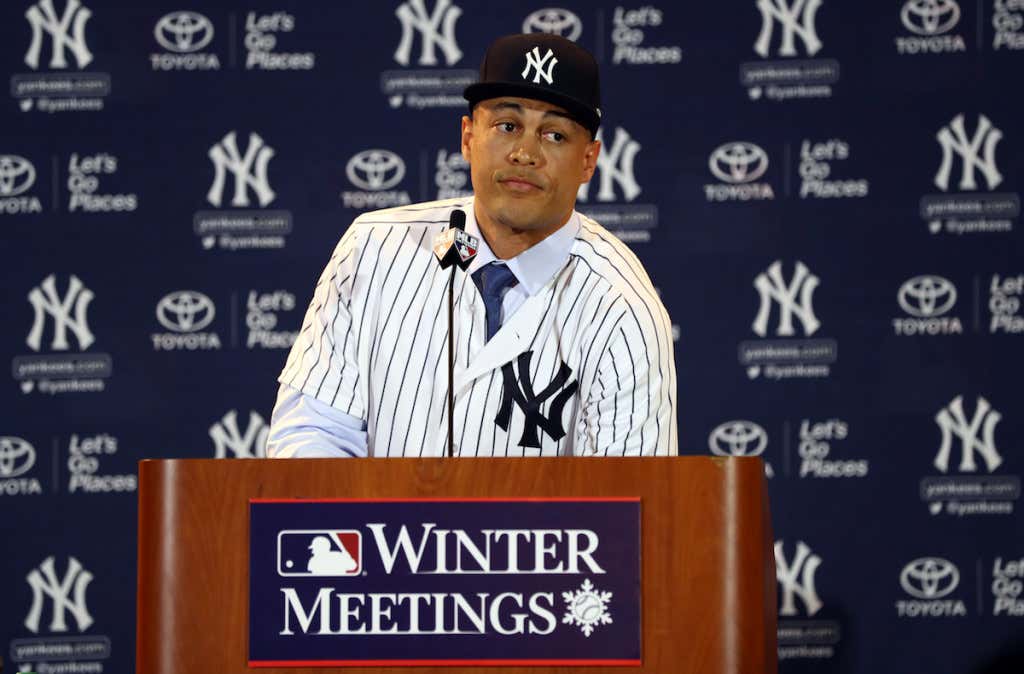 Via Nick Cafardo’s Sunday notes column in the Boston Globe:

You hear a lot of stuff at the Winter Meetings. Here’s one rumor told to me by a longtime, major force in the baseball world. It involves the Yankees and Giancarlo Stanton. The story goes that after 2018, the Yankees deal Stanton to the Dodgers and sign Bryce Harper. Your first reaction is, “Wow! Never happen.” Then you start to think about it. Stanton is an LA kid. The Dodgers didn’t have great interest in Stanton this offseason, but perhaps by the end of next year? The Yankees have always coveted Harper and his lefthanded stroke at Yankee Stadium. It starts to make more sense, doesn’t it?

I had a couple quick reactions to this over the weekend — first one being, what the fuck is a “major force in the baseball world”? Cafardo making it sound like he gets his baseball rumors from the goddamn Wizard of Oz or something. Either that, or it’s Joe Torre, who certainly fits the description of a “major force in the baseball world” who also has big-time ties to both the Yankees and the Dodgers. Either way, pretty dramatic word usage there to describe your baseball source.

Second reaction was, as absurd as a move like this sounds right now, an even more absurd thought would be…can’t they just have both? Per Joel Sherman of the New York Post, even after acquiring Giancarlo Stanton, the Yankees still had roughly $20-25 million to spend before they crept up to the luxury tax threshold. Then they re-signed CC Sabathia to a one-year deal worth $10 million, so now they’ve got $10-15 million to play around with between now and the end of the year.

For as much as the Yankees covet Bryce Harper, I still think it’ll be Manny Machado who ends up in the Bronx from that mega 2019 free agent class. Sure, Harper would make that short right field porch at Yankee Stadium his bitch over the next decade, but just because he fits there and grew up a Yankees fan doesn’t mean that he actually wants to play for the Yankees. Shout out Theo Epstein. Enjoy Wrigleyville, Bryce.

Someone who is actually rumored to want to don pinstripes would be the other 2019 free agent class heavyweight, Manny Machado. After arbitration, Machado is expected to make around $17.5 million in 2018, but that’ll skyrocket once he signs his first free agent contract that could reach a total value of $400 million. The Yankees have been linked to Machado even before free agency as a trade candidate, although they could just wait a year and only give up dollars versus dollars and a massive prospect haul to a division rival in Baltimore.

Regardless of whether the Yankees trade for Machado now or just sign him in a year, it sounds like they’ll be able to afford both Machado or Harper and Stanton in 2019, while also featuring dirt cheap players like Aaron Judge and Gary Sanchez in the same lineup. Mad genius Brian Cashman showed that he’s not just some guy who spends his billionaire owners’ money. That salary dump of Chase Headley’s contract to the Padres was nothing short of brilliant, and if he’s able to do something similar with Jacoby Ellsbury then holy fuck.

Speaking of holy fuck, if the Yankees are unable to sign both Harper and Machado, then they’ll be sitting on a boatload of cash and nothing to do with it. Clayton Kershaw, anyone?