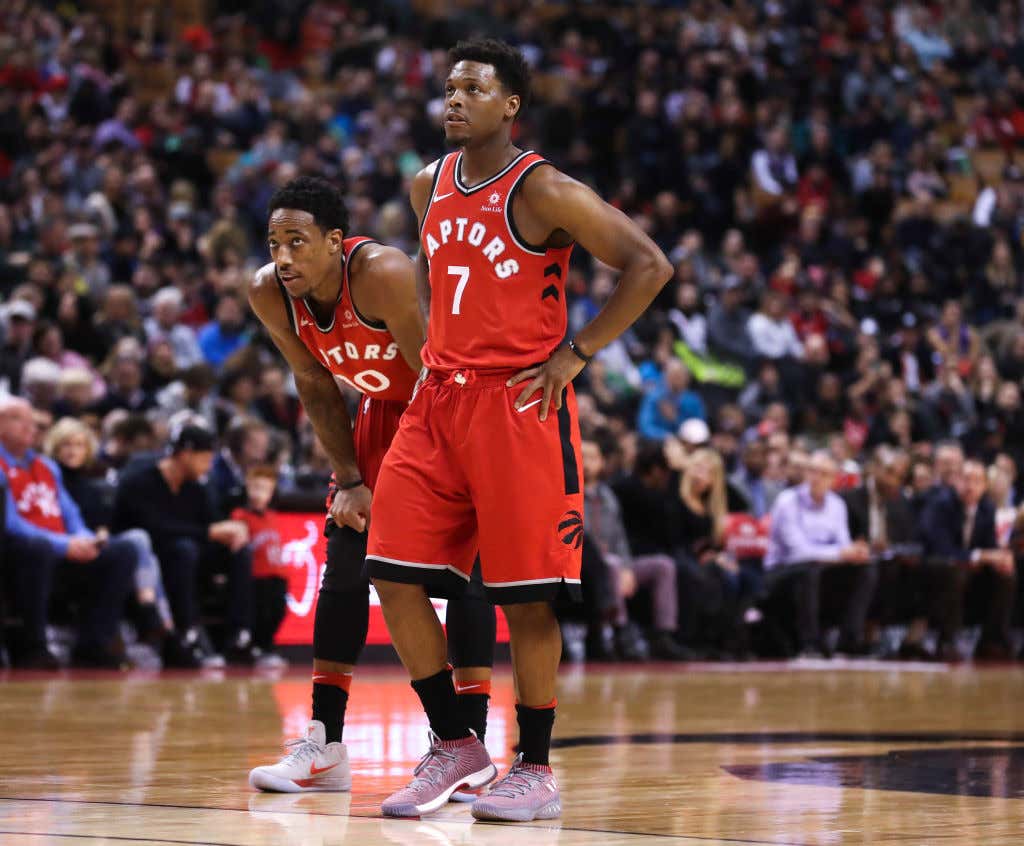 Happy Monday everybody and welcome to another edition of Last Night In The NBA where we catch you up on everything that went down last night in the Association. If you’re like me, you are counting down the days until Thursday when your office closes until 2018, and you’re looking for anything out there on the internet to help kill some time at work to bring that dream a little closer. Well, allow me to do my part and provide you with several basketball highlights from yesterday. If you missed it watching football, here’s what happened

Don’t mind TOR. We can all keep talking about Boston and CLE, and TOR will just quietly go about their business winning games. After that loss to the Clippers, the Raptors have been taking advantage of their cake December schedule going 9-1 over their last 10. After this win, they are now 11-1 at home and have the best point differential in the East by a wide margin at +8.5. Basically, they’ve been just as good as CLE/BOS only with a fraction of the coverage. If you’re a Raptors fan reading this you’re probably nodding your head, as this is not a new thing for you to experience.

but the story to me was TOR’s defense. After giving up back to back quarters of at least 30 points to start this game, the Kings scored just a total of 30 points in the entire second half. This is a surprise considering the Raptors were without one of their better defenders in Ibaka, and Valanciunas played 27 minutes, which is about 6 minutes over his average. He responded with 13/16

For SAC, this was a nice chance for Vince Carter to say goodbye to the good people of TOR one last time.

They were without ZBo and Fox, so I don’t think anybody expected them to win this game. Again, they got off to a great start in that first half, scoring 63 points, and they did get some good performances fro, guys like Garrett Temple who had 18 points on 6-13

But the story here is TOR and how they are maybe the least talked about 20 win team ever.

It seems as though DET is starting to right their ship. Now their thrid win in a row, and whiletwo of those wins have come against ATL and ORL, after you go on a losing streak like the Pistons did, I’m not sure you give a fuck. To get this win they had to hold on for dear life as the Magic made one final push, and choosing the 4th quarter to have your worst offensive quarter was an interesting idea, but behind guys like Reggie Bullock and his 20/5 on 8-10 shooting, DET held on

Reggie Jackson had 17/6 on 7-15 shooting and Tobias Harris had 17 points including some big takes late to solidify the win and the Pistons held on for a much, much needed win. They were great behind the arc, hitting 17 threes which isn’t really Pistons like. I doubt they complain, as they’re in a dogfight with IND for that 4 seed, and have just a game lead on the teams who are 8-5.

For ORL, tough loss when you have an offensive showing like this. 110 points, 48/51% splits, three guys with at least 23 points, you don’t often lose games like that. But that’s why defense is important. You gotta play a little bit of defense.

I get they didn’t have Gordon/Fournier/Afflalo which is a factor, but DET didn’t have Avery so I reject that excuse.

Like I said, it’s important for teams like DET to keep winning, because the Pacers are not slowing down anytime soon. Led by Oladipo and his 26 on 9-14

The Pacers were absolutely nails on the offensive end, finishing the game with 56/44% splits. In fact, no starter for IND missed more than 5 shots. That’s pretty good. They also got two solid performances from their two main guys off the bench in Joseph/Sabonis, who combined for 32/14/4 on 12-20 shooting.

I think the internet ows IND a giant apology for how we all responded to their trade/what was thought of their potential for this season. They have been fantastic

For BKN, we’re still waiting for all that dominance from Jahlil Okafor, it’s coming though, just you wait, all he need is the opportunity. Don’t mind the fact that he couldn’t get it in PHI, and isn’t getting it in BKN either. Stauskas somehow is ready to play, but not Okafor. No cause for concern there, nope no way.

What they did get was 17 points from Crabbe, cone nice bench production from guys like Quincy Acy

but when two starters end up in double figures, that tends to spell trouble.

God damn you Wizards, you had one job. You’re at home, you have Wall back, you finally get to show up why you thought the Cavs were afraid of you, and oh no guess what Lebron stuffed his dick down your throat. Kelly Oubre spending more time doing tough guy push ups than actually stopping his opponents from scoring, and in classic WSH fashion, kept things close until the fourth quarter where they completely shit their pants, scored just 16 points and let Lebron single handedly close this game out. Who loves to talk about it and not be about it more than these Wizards. What jerks.

I get they were missing Wall for like 9ish games or whatever, but isn’t this team too talented to be an 8 seed right now? Man they even got the random bench player outburst you tend to need to beat CLE with Scott’s 19

and they still couldn’t do it.

For CLE, after not really playing anybody recently, they had a chance to go up against a “real” team, and they showed us that doesn’t really matter. CLE is really good no matter who they play, and Isaiah Thomas is about to be back. Sure it starts with Lebron, who again went for another triple double

but CLE’s role players are playing well, and that’s always going to be the biggest thing for them. Their bench usually makes or breaks their playoff success in my opinion, and so far the bench looks great

The Cavs have lost once in December, and have just one loss since November 11th. Safe to say they are trying just a little bit earlier this season.

And that’s it! You’re now all caught up on everything that happened last night in the NBA. We have 10 games on tonight including BOS/IND, UTA/HOU, POR/MIN, DEN/OKC, LAC/SA, and GS/LAL which all should be fun as hell. If by chance you miss anything that’s OK, just come back tomorrow and I’ll bring you up to speed.