Allow me to set the scene and you can guess what year it is. A football team faces a crucial 4th and 1 situation on their own 39 yard line. The clock is dwindling down in the final minutes of a loser-goes-home type game. The quarterback goes up the gut for a QB sneak and comes up right at the yardage needed to move the chains. The chains come out to measure and no one can tell what the call is. The refs look at each other in the most befuddled fashion, wondering how they were gonna make a ruling that could very well end one of these teams seasons. Should they just flip a coin? Maybe have each team plead their case? Nope, one ref pulls out his trusty index card, proceeds to bend it in half, and places it in between both the football and the first down stick. The year is 2017, not 1956. That’s how the Dallas Cowboys achieved last night’s biggest first down.

That’s how Gene Steratore awarded Dak Prescott and the Boys a first down with 5 minutes to go in last night’s tie ball game. Because he was unable to slide the index card between the first down stick and the football, that meant Dak had gotten the first. That’s a real life thing that happened. It’s 2017, we have the capability to launch a missile into someone’s mailbox from across an entire ocean while also checking a social media app to stalk where someone is by using something called a SnapMap. We can send or receive money directly from our bank accounts just by typing someone’s name into an app called Venmo. There are GPS apps that can tell me the exact time I’d get to a destination based on future traffic patterns and accidents. We can do all of these things, but we’ve yet to crack the code on using GPS technology to figure out first downs and goal line rulings in the NFL.

Imagine if last night there was a microscopic computer chip in the football and we could use that and tell instantaneously if Dak got a first down? Nope, clearly those soccer people who do this with goal-line situations are straight up fools. If you combine the net worth of all 32 NFL teams you’d get a number hovering around $62 BILLION dollars. We used an index card to decide the winner between two of them. Not GPS technology, not infrared lasers that go across the field, nope we used a bent-in-half index card. I had no dog in the fight, but if I’m a Raiders fan and my season ended tonight based on an index card I think I’d give serious thought into blowing up NFL HQ on this fine Monday morning. Your team is being ripped out of your grasps and moving to Las Vegas, and you’re losing games because of an index card and a fumble into the end zone for a touchback. That stuff doesn’t even happen to Browns fans.

You gotta love Gene Steratore’s smirk as he made the call. Dude knows what he’s about to say is laughable.

Oh while you’re here, guess who was the ref who made the infamous Dez Bryant “Was it a catch?” ruling? 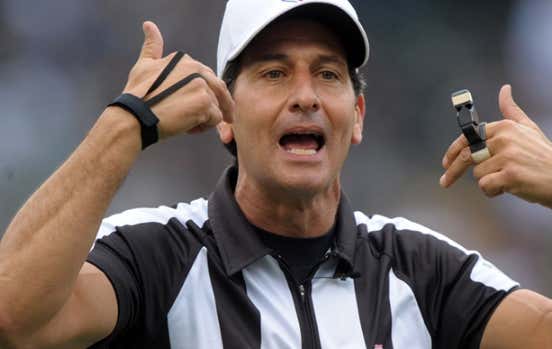