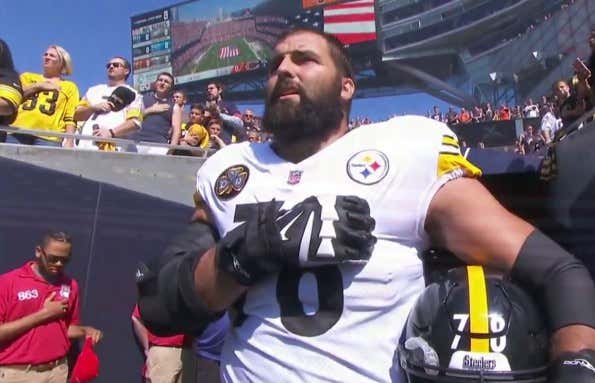 Pittsburgh Post-Gazette – “Don’t blow me up on this!” Steelers tackle Alejandro Villanueva joked (I think) at his locker recently. … The topic at hand was Villanueva’s devotion to a certain football team. One that competes in the AFC East and plays its home games in Foxborough, Mass.

He wasn’t just a patriot. He was a Patriot fan. …

He maintained his allegiance until he joined the Steelers three years ago. And he’s still a big Tom Brady admirer, though he admits to it with mock sheepishness.

Then he laughed and raised his voice: “But now I hate him!” …

Actually, Villanueva maintains great respect for Brady and the Patriots because they helped carry him through some harrowing times in Afghanistan, where he served three tours of duty in the Army. He deeply appreciates Brady’s connection to the military.

“The crazy thing is, I get calls from people who are overseas, secretive places, doing really tough missions, and they say that when they have a bad mission, bad day, Tom Brady will (video-teleconference) them or will talk to them, you know?” he said. “It’s one of those things where regardless of how competitive we are — and obviously Steelers-Patriots for us, maybe not so much for them, is such an important game on the schedule — you can put football aside and really look up to a player who’s doing great things for servicemen and women.

This might be hard to believe, but every so often I get accused of being an over-the-top Tom Brady fanboy. Shocking but true. I guess some guys object to you being too pro a guy who came from nothing, was overlooked, made himself into the greatest winner of our lifetimes in any sport, conducts himself with class and dignity and routinely does things that are impossible for a man his age. Go figure.

But I’ll put all that aside and swear I am being totally objective when I say this is one of the best athlete stories I’ve ever heard. I would say that no matter who we were talking about. Name anyone. If Eli Manning, Lebron James, Ben Roethlisberger, Sidney Crosby, Tiger Woods or Terrell Suggs was doing this, I’d say the exact same thing.

The idea that the men stationed in Satan’s asscrack, ordered to go fight the worst people on Earth, knowing that every day could be their last are getting Skype calls from an athlete back in the states just to try to boost their morale doesn’t make you proud to be a fan of any particular team. Or athlete. Just proud to be an American.

And what makes it even better is the fact that we’re not hearing it from the athlete himself. Instead, a legitimate hero like Alejandro Villanueva is finding out about it from his buddies who are still in harm’s way. Brady has said nothing to anyone about it. He’s just been doing it, in the middle of a football season with 10 million other things going on in his life, because it’s the right thing to do. If “that means a lot” to Villanueva, it should mean a lot to all of us.

But just to add some perspective, here’s a reminder of how Villaneuva won his Bronze Star with a “V” for valor. He was commanding an Army Ranger platoon that came under attack by the Taliban:

Spc. Martin Piggott was shot in the kneecap. Sgt. Roy Dutton was shot in the back of the leg. Army Pvt. 1st Class Jesse Dietrich was shot near the armpit. Under heavy fire, Villanueva pulled the wounded Dietrich down an alley and into a second mosque, where a medic took over. Villanueva returned to fight, but when he came back to check on the injured soldiers, the medic told him they needed to move the wounded to a safer location. Carrying Piggott on his shoulders, Villanueva took the three to a nearby school, where they waited for a helicopter that would transport the wounded to the city of Kandahar.

In spite of Villanueva’s courage under fire, Pvt. Dietrich died on the way to Kandahar. I include this just to distinguish real sacrifice from a kind gesture like Skyping with soldiers. But at the same time, all any of us back here can do is support these men, let them know that they are not forgotten and that their bravery is appreciated. And it “means a lot” that Brady is doing just that.

It should be a hell of a game Sunday.
@jerrythornton1