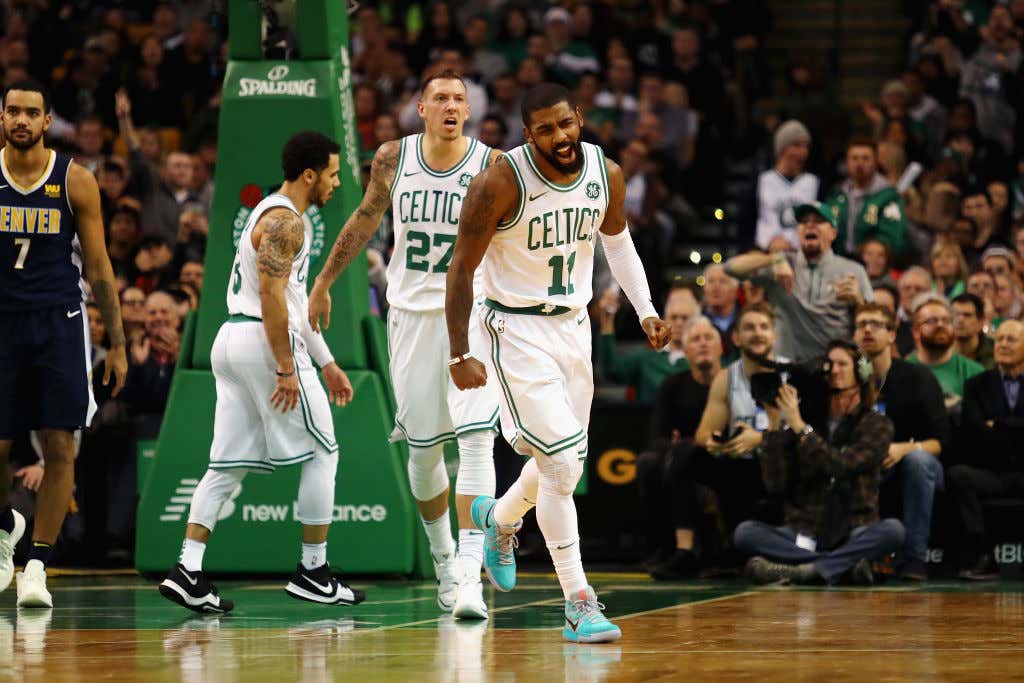 Who says the Celtics have an average-ish offensive team! You certainly couldn’t tell by their 124 points which was a season high, or their 59.5/44% splits while also getting to the line 24 times. Obviously with Kyrie back, scoring wasn’t really an issue which was a relief given how they looked against CHI, but really it was essentially every player that hit the floor. The Celtics played with fire in this game getting into an offensive shootout with a team like DEN, a team that averages 107.5 a night and is 8th in the NBA on offensive rating. Granted they didn’t have their best player in Jokic, but the Celts didn’t have Horford so I consider that a wash.

With teams like TOR/CLE beating up on the trash teams of the league recently, the Celtics need to keep pace despite their tough schedule. This win makes them now 9-1 against the West, with 4 of those wins coming against teams that are currently in the top 8. Pretty good.

So if you’re someone who loves offense and despises defense, well this game was for you. Let’s get started.

– Breaking news: Having Kyrie in your lineup is pretty sweet. After sitting against CHI and seeing the team struggle to score, Kyrie was back and he was fantastic. 33/7 in just 32 minutes on 12-19 shooting, the guy was a goddamn offensive wizard

What I loved about Kyrie’s night was nothing he did seemed forced. Remember the DET fourth when it just felt a little off? That he was trying to do a little too much? We didn’t have that at ALL in this game. I thought Kyrie had the perfect mix of getting his teammates involved, but then also making shots when the Celts desperately needed offense to combat DEN’s shot making.

It became pretty clear early in the game that DEN would have trouble staying in front of Kyrie, I mean his hesitation moves were insane, and as a result he lived in the paint. Eight of his 12 makes came from 15ft or closer, and in a game in which the Celtics needed him to be efficient, he made sure his approach fit the bill. Great night.

– As impressive as Kyrie was, we expect that type of performance from him. What I don’t think any of us expected was the shooting of Jaylen Brown and Jayson Tatum. Two guys that struggled against CHI came back with a vengeance last night, combining for 41 points on 15-21 shooting

When the Celtics get this type of offensive performance from these two, they are almost impossible to beat. By no means am I saying that this level of shooting is sustainable, but there were things we saw that I think can be. For example, Jaylen’s midrange game. The formula to get Jaylen going is pretty simple in my opinion. Get him some plays at the rim early, maybe a big momentum dunk or something, then that opens up his confidence to take that little 15 footer, which he is starting to make more and more. He’s a 48.6% shooter from the midrange zone, up from 31% last year. That’s huge. Once he sees that go in, buckle the fuck up because the Celts are going to get him some corner threes, and by that time his confidence is soaring and he makes them. Just so you know he’s shooting 40% from the right corner and 46% from the left so far this season.

With Tatum, he was coming off his worst game as a Celtic against CHI, so you have to love his aggressiveness and ability to bounce back against a pretty good team. It’s crazy the impact he is making while taking just 9 FGA. Imagine the day he gets to take like 13-15 a night? I’m getting flustered just thinking about it.

– With Baynes being the only 7fter to play, it’s only natural that he had one of his best performances of the year too. In 28 minutes, which were the most he’s played all season, Baynes responded with a solid 17/6 on 8-11

I just love everything about Baynes and have since the second he stepped on the court. What a combination of midrange shooting, verticality on defense, and overall awesomeness. Did I shit my pants when he had that awkward fall on a dunk attempt? You bet your ass, but then I remembered that Baynes is basically indestructible and I was able to relax. Ainge has made a lot of great signings this offseason, but Baynes has to be near the top of that list.

– Speaking off Ainge signings, how about Shane Larkin!!!!

This is like the third or fourth game that Shane Larkin has basically won by himself. None of us knew what the hell Ainge & Co were thinking when they signed him during the preseason, and here we are with egg on our face. Basically just Ainge and my Dad knew what Larkin could do, and how he could help this team. Larkin is one of these players that have shown they can be ready when called upon, even if they go weeks without playing legit minutes.

I didn’t see much of Larkin in any of his other NBA stops, but one thing that impresses me with him is how confident he is. He was dragging his nuts last night and it was fun as hell to watch.

– I would like the second unit to know that I accept their apology. After being complete no shows against CHI, they took the opportunity last night to apologize to us all, and we should accept it. Without the second unit’s performance in this game, the Celtics lose. Even with Kyrie going nuts and the rest of the starters playing well, the proof is in the pudding 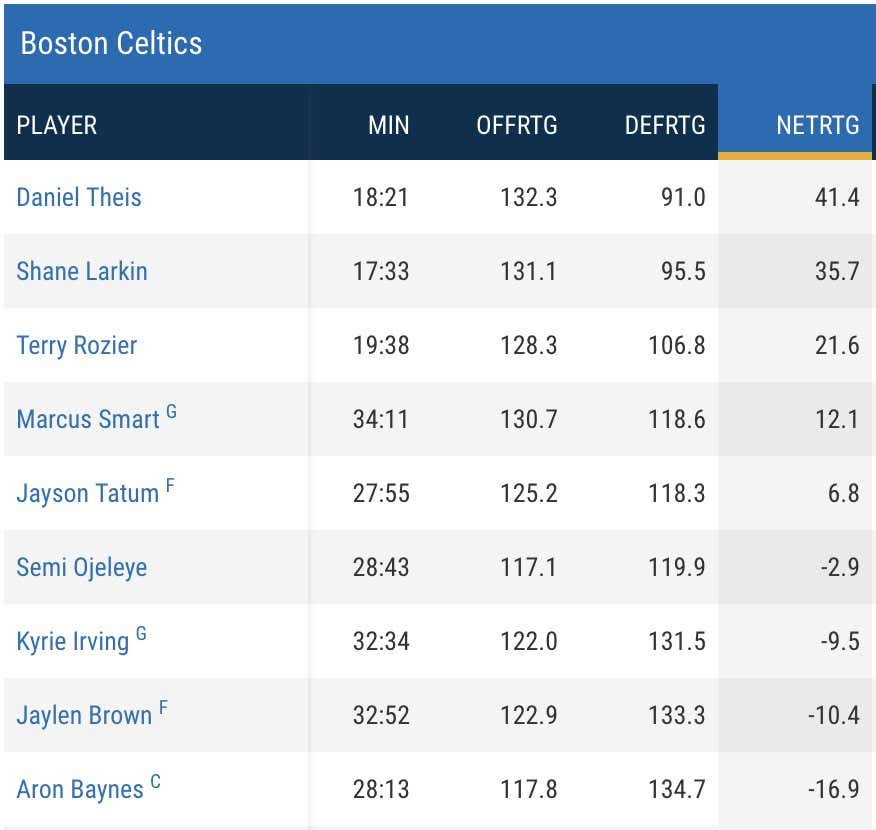 maybe they just needed some home cooking to get back on track, but they saved the day no question.

– We are not worthy

A top coach in the NBA and a top 5 funniest person on the planet. Man are we blessed.

– Marcus Smart didn’t make many shots, but boy was he moving the ball. Led the team with 9 assists, and did everything you could want on the defensive end. I know people don’t care about this, but he was a starter best +7.

– For the most part I thought Semi played well. He rebounded well, defended well, and played with great energy. But his shot, man his shot is surprising me. I did not think he would struggle like this, and honestly he’s looking more and more like a SF/PF version of Marcus Smart. Another 0fer night for him both fromt he field and from three, he certainly isn’t hesitant which is good despite his struggles, but man. The second he gets out of this slump he is going to be such a weapon, we just have to hope it actually happens.

– We really saw why Horford is so important to this team. Yes they won, but they also did things that are not sustainable like scoring 124 points and shooting like they did. The Celtics were DESTROYED on the glass 48-30, and lost the OREB battle 20-4. The Nuggets lived in the paint scoring 58 points, and they had more than double the second chance points. Combine that with perhaps the worst defense the Celtics have played all year, in my opinion they were a bit lucky to pull this out. All these areas on most nights spell doom for the Celts, so yes while they won and I’m thankful for that, the lack of defense really concerns me if they ever have to go without Horford for a long stretch.

– Speaking of defense, the same way DEN had no answer for Kyrie/Jaylen/Tatum, the Celtics had no answers for Garry Haris and Jamal Murray, who combined for 64 of DEN’s 118. This surprises me because Smart/Kyrie have been pretty good defensively this year, but they were absolutely crushed on that end during this game.

– Don’t look now, but the Celts point differential is shrinking by the week. I don’t know if others even care about that, but it’s usually a good indication of how your team is playing. Personally the offense is fun, and I’m glad to see the ball go through the hoop, but this team cannot get away from what got them to the most wins in the NBA in the first place, and that is defense and rebounding.

– I don’t care what the numbers say, no team in the NBA misses more dunks/layups than the Celtics. It’s honestly incredible how many they miss per game.

– I enjoyed the whole “see the Celtics are 3-0 without Horford!” trolls last night. Reminded me of when the Celtics would beat the Magic w/o Isaiah and people were like “See!! He’s overrated!” I knew it was coming, but I still feel sorry for those who ran with that.

– The only thing this game was missing was a Yabu three. That’s why I was annoyed the Celts couldn’t just play a lick of defense, because based on how they were scoring the ball if they had, we would have been blessed with a Yabu appearance. For shame.

We now turn the page to a little UTA/MEM back to back action starting tomorrow, and the team is really going to have to grind things out until 2018 so it wouldn’t surprise me if Brad finds other games during this run to strategically rest. Other teams are playing well, so this is no time to go on a little skid, which is why I’m glad they responded the way they did. Now, together, say it with me