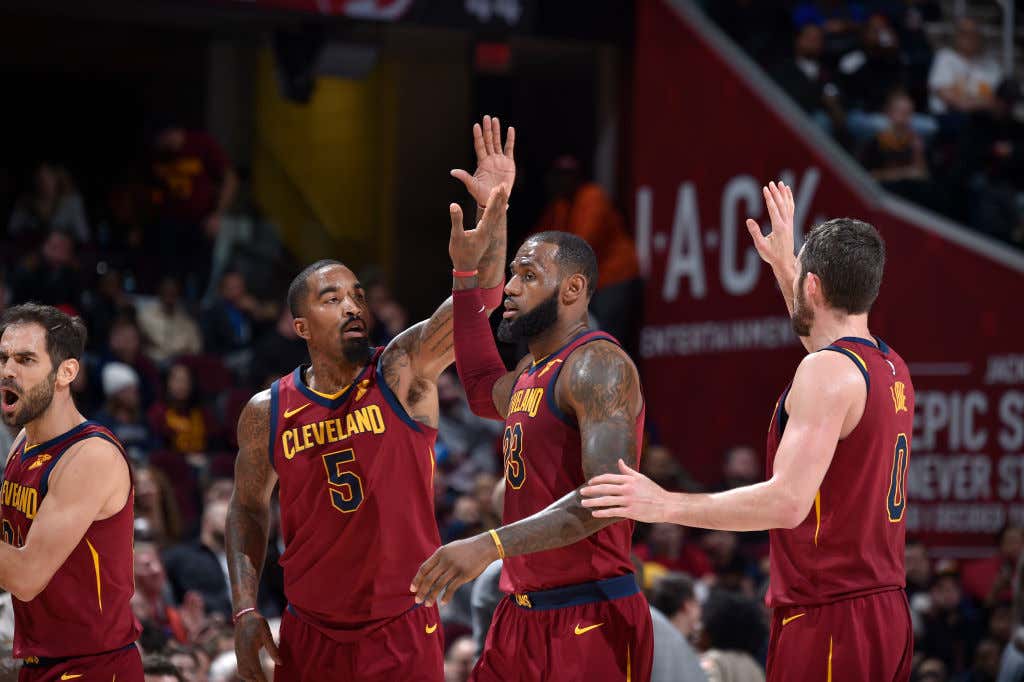 Welcome back to another edition of Last Night In The NBA where we catch you up on everything that happened from the night before in the Association. With Tuesday night being the first night of Hanukkah, perhaps some of you got a little carried away and had too many latkes and fell asleep a little early. That’s fine, but there were 7 games on last night, some of which included some pretty impressive performances. Grab a chair, because here’s what happened.

Yeah big deal, the Cavs continue to beat the worst teams ever right? Well, they’re now 2.5 games behind the Celtics for the #1 seed, and during that time have been a top 10 offense AND top 10 defense over their recent run. And they get Isaiah back pretty soon.  It’s clear for the first time in a long time Lebron is trying before February, and he’s been fucking terrifying. Last night, he went for 25/7/17 on 11-13 shooting. 11-13!!

I know it was the Hawks, but how could you not be impressed by that? Even if he is completely hatable off the court and on social media, the minute he steps onto a basketball court you have to just tip your cap. He guy is insane.

Perhaps the biggest surpise to me about this year’s CLE team is the prduction they’re getting from two guys on their bench. Jeff Green had 17 points on 7-12 shooting, he looks better than ever,

and Kyle Korver is showing that if all you need him to do is spot up and make threes, he can still help you, as he made 6 last night.

Cavs fans should enjoy this now, because things do get a little more difficult for them towards the end of the month and in January.

For ATL, not bad! 46/44% splits, you scored 114 points and had just 10 TOs. That will win you games when you aren’t playing Lebron, so congrats! Also good nights for both Bazemore and Prince who combined for 44 points and 8 made threes

Given that their injuries, the Nuggets played somewhat small with Plumlee (10/13) as their only big in the starting lineup, and it worked! They got off to a good start in that first quarter and never looked back. A surprising result considering Barton/Harris combined for 5-15, but when you have Jamal Murray leading the way with 28, it doesn’t matter

What was interesting about DEN’s start was it was fueled by their defense. Holding out Jokic one more game, they still started the game by causing 8 turnovers in the first 9 minutes. They also got a solid performance out o Trey Lyles, who had 20 points on 7-7 shooting in 27 minutes

This was a big win for DEN, giving them a little separation from NO as the 5 seed in the West, and all reports say Jokic is coming back. I will say though, Faried getting a DNP-CD sucks. Free that man.

For DET, is it time to panic? Since the wins in Boston/PHX, they haven’t won since. 7 losses in a row now, and in this one they couldn’t even break 90 points? DEN is not exactly a defensive powerhouse, and yet the Pistons finished with 35/36% and 20 TOs. That is GROSS. Their starters combined for 9-36 and just one of them ended up in double figures. Avery/Harris/Drummond had a total of 13 points.

In just a few weeks time, they’ve gone from a 2 seed to an 8 seed and look lost as fuck.

It’s pretty simple. Give the ball to Porzingis and get the fuck out of the way

Crazy what getting a little freaky with Jen Selter (allegedly) can do for a man on the basketball court. When Porzingis is in the zone like that, I’m not sure there are 5 people on the planet that can stop him. The inside/outside combo, the ease at which he puts the ball on the floor, what a unique talent.

Don’t look now but the Knicks are flirting with playoff contention. Happy for Clem.

The Lakers best rookie was also good as well, with Kuzma chipping in 19 points in his MSG debut

At the end of the day I think everyone came away happy. Knicks fans got a show from Porzingis and a nice OT win, the Lakers got good showings from their young talent on a big stage, and Celtics fans rejoice because they ultimately lost, which is all anyone should really care about. Love when everybody wins.

The Wizards picked a bad time to have their worst quarter of the game in the fourth, and it ultimately cost them a game in which they really should win. Instead the Nets used a balanced approach with 7 guys in double figures, but none of them over 16 points, to pull out the win.

At 11-15, I saw that their pick is now slated for the 11-15 range, which brings a smile to my face. Also shouts to Spencer Dinwiddie for his 12/12 performance. You the real MVP.

Side note, how does WSH lose a game in which the starting backcourt for BJKN goes 4-25 from three? Figure it out.

For WSH, surprise surprise, it was Bradley Beal and basically nobody else. He had 28 on 11-33 shooting

The other four WSH starters combined for 27 points. Despite the lack of help, the Wizards DID find themselves up 1 with 51 seconds left. But it was mental error city from then on, from Satoransky not inbounding the ball in time, to not fouling with 9 seconds left, to bad turnovers and even worse fouls. Late game execution is an issue for this team over the last couple years, and it bit them in the ass last night.

WSH has now lost 2 in a row, and things don’t exactly get easy in their next couple.

Here’s something you probably didn’t expect to read. The Spurs get their best player back, and then go on to lose to the Dallas Mavericks! DAL turned it over just 6 times in this game which is crazy, and got just enough from their trio of Farrell/Barnes/Matthews to pull this out.

Also shouts to JJ Barea for being unstoppable too

So you can see, when people on the internet have been saying that the Mavs have been playing everybody tough recently, it’s not just lip service, it’s true. Now it should be mentioned, they most likely won this game because Kawhi was on a minutes restriction, but you think they care? A wins a win

For SA, finally, he returned. Not only did Kawhi return, but he looked like the same old Kawhi in his 16 minutes in which he scored 13 points

Not a bad performance for a guy who missed 27 games. The fact that they were able to go 19-8 without him is wild, and they can thank LMA for carrying the load. He led the way with 23 by the way. But much like WSH, the Spurs picked the wrong time to have their worst quarter, scoring just 20 points in the fourth while giving up 28. There’s your ballgame.

Imagine that, PHI gets their best player back after not playing for what felt like weeks, and would you look at that, he plays a major role in a big time road win. I get PHI fans want to be cautious, that’s the right move, but how can you watch him perform like he did last night, and not get frustrated that Embiid isn’t fully unleashed? Could they be 4-5 wins better than they are right now? He did play 39 minutes in this game, so we may be getting there fairly quickly.

And yeah, if you didn’t know already, him and Simmons are pretty decent at basketball

We also don’t hear much about it on the national level because most of the talk is around those two, but how about JJ Redick being fucking nails? PHI fans have to be ecstatic about what he has given them this year. He had 26 last night and has been shooting the ball as well as I’ve ever seen over his last couple.

Also helps when you get to OT and score the most points any team has scored in 12 years. Great win.

For MIN, they need to have a talk with their head coach, because he is going to kill his players. At this point it’s not even really a joke, he is running his starters into the fucking ground.

and Towns had 19/16, but late mental errors cost them, and I can only imagine what this team will look like in a few months. History is not kind for players like Towns to be playing this many minutes. Butler is going to get tired, Thibs is sabotaging his own team and he either doesn’t realize it, or he doesn’t care. If I was a MIN fan this would worry the FUCK out of me.

Crazy to think about how close MIN is to being where OKC is currently if not for those two wins against them, and if they were, would things be a little more tense in the Twin Cities?

Somebody had to win this toilet bowl matchup, so congrats SAC on your 9th win. It was Star Wars night in SAC, which I guess was cool if you’re into that sorta thing

For PHX, TJ Warren led with 18, but you can’t go half a quarter without scoring like they did in the fourth, and as a result have lost their 4th straight. You could say not having Booker in the lineup has made a difference, as they’ve lost 9-11 and 0-3 since he went out.

And that’s it! You’re now all caught up on everything that happened the night before in the NBA. We have 9 games on tonight including some great matchups like DEN/BOS, OKC/IND, MIL/NO, and MIA/POR. If you miss anything just come back tomorrow and I’ll fill you in.