First of all, why are there a thousand horses in the ring? It looked like they were shooting a western. Second of all, bull riding is a one-on-one event. Reason being is if too many objects are in the ring the bull tends to get spooked, increasing the likelihood of a murderous rampage. Which is exactly what happened here. The cameras cut so we didn’t get to see the full aftermath but chances are it was ugly. And I’m not talking about the guy who got flung thirty yards because he chose to lay down rather than run. I’m talking about the two-thousand-pound horse that got paraded around like a piñata. It was on the horns so long the bull forgot it was there. The other horses wouldn’t even go near it.

You would think there’d be a plan in place for when things go left but apparently not. The second they lost control it was every man for himself. They left so fast the arena door bottlenecked. The only guys who tried to get the situation under control were these three goons. 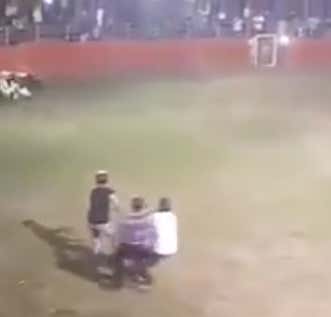 Who look strikingly similar to the Jackass boys. At any rate, it’s nice to see a bull get revenge from time to time. Hopefully nobody got too hurt.