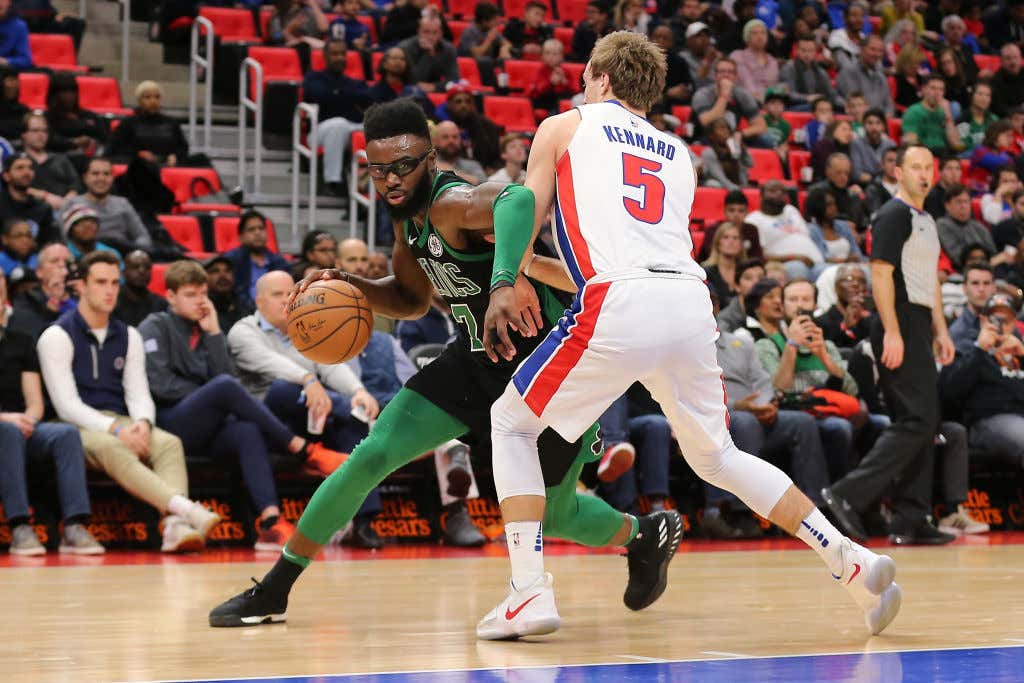 The NBA is all about adjustments. It was clear after the Pistons came into the Garden and beat down the Celts, that the next time these two teams played, the Celtics were going to have to adjust. Drummond absolutely abused Horford, and the Celtics could do little to prevent the Pistons from shooting a billion percent from the floor. Well, when they took the court yesterday afternoon to seek their revenge, it was very, very clear that Brad and his staff adjusted their approach and would you look at that, they won.

It should be noted that the Pistons are sliiiiiiiiding down the Eastern Conference standings, but they were 8-3 at home at the time, and still play the second best defense in the East. With Marcus Morris out with a knee injury (more on this later), the rotations and lineups were going to be an adventure, and thankfully the Celts had Brad to lead the way.

– If anybody needed a bounce back effort, it was Al Horford. After what was maybe his worst performance of the season against SA, he sure did bounce back with 18/9/6 with 2 blocks and 0 TOs. He led all starters in scoring, and his 15 FGA led the team. Essentially, he played with the exact opposite style of aggressiveness he showed the game before, and would you believe it had a positive impact? This is why Horford is so important. Kyrie had one of his worst games of the year, but the Celts were OK because they got Al involved early and often.

There was a big reason for this success, and it has to do with the Celtics adjustments. If you remember, the last time these two teams played, the Celtics started Morris at the four, which put Al out of position at the 5 and against Drummond. As a result, he was relatively quiet offensively, and got dominated defensively. Makes sense, he’s not a center. Well last night, by starting Baynes, this now shifted Al to his more natural position, against a much smaller Tobias Harris, and look at the difference.

It’s pretty annoying that even still, the second Horford has a bad game, my mentions are filled with people who seem to forget 98% of the rest of the season. He had his first bad game in weeks, and in the very next opportunity got back to being the Horford that has helped carry this team. Maybe everyone just fucking relax.

– I very well could have started with this man. Partly because he is a majestic beast, but also partly because he was probably the second most impactful player who saw the floor last night. Aron Baynes, you were fantastic

On the surface, you love his 13 rebounds and 89.5 defensive rating. He completely and utterly shut down Andre Drummond, something not many bigs have been able to do this year. The difference was he has the body type to bang with the bigs down low, and it only made it more frustrating that he didn’t play more in their first meeting.

But it was more than that. Remember, adjustments. What was the one play that the Pistons kept running that the Celtics had no way to defend? The Bradley/Drummond pick and roll. Well, I want to say at least 3-4 times it was Baynes who was breaking up that play, defending it to perfection. That’s why you only saw Drummond score 6 points, because the Celtics took away the set that got him probably half his points in the first meeting. I think we’re seeing more and more evidence that Baynes needs to be starting regardless. The help it does on the glass and on the defensive end, as well as everything it does allowing Horford to play the four, is when this team is truly rolling.

– I’m running out of ways to fall in love with Jayson Tatum. Another 3-5 night behind the arc, he again came up huge in clutch moments which is insane. We should be used to this by now, you know given this stat and everything

With every game he inches closer and closer to being untouchable. I know Simmons is the favorite for ROY, but at some point doesn’t team success matter? I would say Tatum’s role and impact on the Celts and their league most wins is pretty significant

– It took a half, but the Jaylen Brown we got in the second half is the type of Jaylen I want all the time. He was so much more aggressive, and scored 9 of his 12 points in the final 24 minutes.

This isn’t really a surprise, because all of his makes came from within the paint, and he took just 1 FGA from the corner. Everything else was at the rim and that tends to work out well not only for Jaylen, but for when the Celtics really need a bucket like they did at times in the second half yesterday. On a relatively quiet offensive day, he was still a team best +16 so not the worst outing we’ve ever seen.

– The formula for this team is pretty simple by now. Rebound, and defend. Well, the Celtics won the rebounding battle 50-46, and the 81 points the Pistons scored was the lowest an opponent as scored all year. They finished with 33/30%. This looked a whole hell of a lot more like the elite defense we saw to start the year, and something tells me having more Baynes was a factor in both of these areas. I mean the Celtics should lose games in which they barely break 90 points, but thankfully they remembered how to defend at a high level, and prevented second chance points, with the Pistons only having 8.

– Everything about this. I have never been more jealous of Kyrie Irving in my entire goddamn life. Fucking Yabu man what a treasure

– He struggled offensively, but Rozier got back to being an absolute beast on the glass with 7 rebounds in his 23 minutes. It feels like offensively he’s getting a little 3PA happy, with 5 of his 7 FGA coming from behind the arc, but if he’s going to rebound like this, and defend at a plus level, I’m cool with it.

– Classic Smart going 4-10, having 5 TOs and ending a +10. I know Ainge said to not put any stock into these, but that doesn’t mean we can’t giggle at how little sense this all makes. What a weird year for Smart.

– The playoffs are a different animal, but is anyone at least somewhat concerned with Kyrie having to go up against Avery in a series? Part of me remembers how that made no difference whatsoever when he was on CLE, but the other part remembers how Avery has really given Kyrie problems in their two meetings this year. In the first matchup, he went 6-16 and 1-6 from deep. Yesterday, it was 4-12. This was Kyrie’s worst performance since the ORL win on 11/5, so it’s not exactly reason to panic, he’s still having a great year, but he certainly didn’t do the Celts any favors yesterday.

I know people who have watched Kyrie a lot probably aren’t surprised by his low assist numbers, but it is starting to alarm me. After just 1 against SA, he had just 3 yesterday. Part of it is guys just missing shots, but for the month of December he’s averaging just 3 assists a game, and his assist averages have dropped every month of the season. Again, scoring wise he more than makes up for it both in terms of points and efficiency, but it did feel like he went a litttttttle too much hero ball late in this game, instead of recognizing that wasn’t exactly working.

– Raise your hand if you were shocked that the Celtics blew an 18 point lead and made all of us sweat the shit out of this game. I see no one has raised their hand. I’m glad you’re all learning.

– This has a lot to do with who they played, and the caliber of defense it is, but only 2 fast break points? For the Celtics? With the sort of athletes they have? That felt low.

– Do we ever think there will be a time where this Celtics team doesn’t have a horrific second quarter? You come out, start the game hot, have 50/50% splits to open, and then the quarter changes and it’s as if they turn back into pumpkins. 33/28% splits with 7 TOs? That is disgusting basketball and I am offended they made us watch it.

– The Celtics got very lucky if you really think about it. Kyrie and Al combined for 4-17 in the second half. Fortunately, three of those makes were from behind the arc, but yikes.

– If you thought that second quarter was bad, may I interest you in the fourth quarter? How about a stellar 18 points on 27/16% splits? The Celtics started this frame something ridiculous like 2-16 or some shit. Over half their FGA were from behind the arc, it was almost like they were trying to do everything they could do blow this game. I don’t get why this team suddenly struggles in the fourth quarter. Kyrie went 0-fer, which I don’t think we’ll see again all year, and Jaylen/Tatum took just 2 combined FGA. The whole thing seemed out of wack, and they were lucky the Pistons were essentially just as bad.

I do not like having to worry about closing games in the fourth quarter. We haven’t had to do that for a lonnnng time on this team, and haven’t really had to so far this season, but recently, I dunno I find my butt clenched way more than it should be.

– I thought maybe, just maybe when they went up 18 that this would be a Yabu sighting game. Fuck this team for blowing it and depriving us of that greatness. Stop doing that and let Brad unleash Yabu on the world would you please.

All in all, a win is a win, they split the road trip and very well could be undefeated if not for fucking Manu. They wrap it up tonight with the Bulls, which on a back to back will be very interesting to see how they approach it. Will they dick around or will they stop them early and let the starters rest given what their schedule entails in the coming days. Either way, say it with me