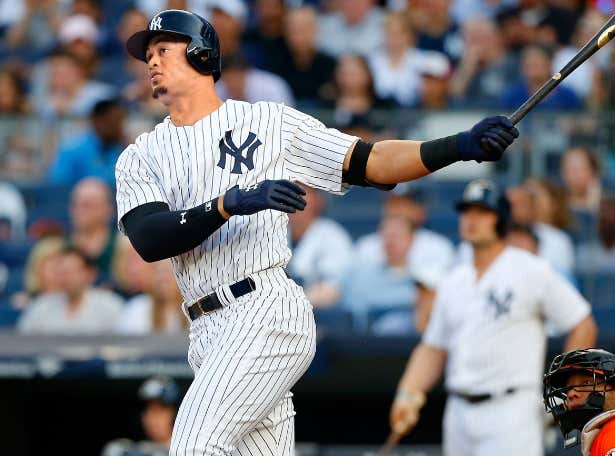 Today at around 2:00 PM Giancarlo Stanton will officially be introduced as the newest member of the New York Yankees. At the same time, the Yankees will officially become the Evil Empire in Major League Baseball once again. When the Yankees aren’t hateable to the outside world nothing is fun. Obviously, to the Red Sox and Mets we’ll always been hated beyond imagination, but not to everyone else. Not like this. Now the Yankees hate is equivalent to Golden State Warriors hate. Aaron Judge, Didi Gregorious, Gary Sanchez, Severino, Greg Bird? They’ve all become villains. When the Yankees traded for Giancarlo Stanton on Saturday morning they all become the bad guys. They’re the bullies in Major League Baseball once again, and to be honest, all feels right in the world for a change.

The best of all of this is that the Yankees did not give up one top prospect in the deal and managed to stay under the luxury tax. Who’s better than Brian Cashman? Short of Theo Epstein, nobody. That’s why along with the Stanton trade, Cashman also finalized his own 5 year $25 million extension #InCashmanWeTrust. The low-tier prospects that were sent to Miami were Jose Devers and Jorge Guzman aka no one anyone cares about. God Bless Derek Jeter. The Marlins will send over $30 million once it becomes official Stanton won’t opt-out in 2020. Adding in Starlin Castro’s contract and the Yankees managed to stay under the luxury tax threshold, allowing them to be in on the Manny Machado sweepstakes next year. The rich get richer.

What else is in store this Winter? Here are some quick hitters:

Ellsbury The plan with Stanton will be to rotate him, Judge, and Gardner between the corner outfield positions and DH to keep them fresh, while keeping Aaron Hicks as the everyday center fielder. One of Brian Cashman’s remaining tasks this Winter will be to trade Jacoby Ellsbury. The big hurdle here is that Ellsbury has a full no-trade clause and has every intention of competing for the starting CF job with Hicks. Reports have come out and said they’ll eat half of his remaining deal if it means getting him off the team. Whether they can convince Ellsbury to waive his no-trade clause is the big question here.

Clint Frazier What to do with Clint Frazier? With two of the three outfield spots locked up for the future and the 3rd seemingly locked up too (Hicks then Florial) there’s no real role for Frazier for the long-term future of this team. Clint is an awesome baseball player and I love how balls-to-the-wall he plays. But our outfield is a crowded place unfortunately. I think the best move would be to try and flip Clint for a starting pitcher this Winter. I just think it would be the right move for both the Yankees and Frazier so he can start his major league career and the Yanks can upgrade at a different position.

Back of Rotation The goddamn Angels are in talks about bringing on CC Sabathia. Well, go fuck yourself LA. That’s my fat man and my stopper and you can’t have him. I would love to bring back Carsten Charles for one more year at like $12-$15 million. He’s 100% earned it and it would be fantastic to fortify the back of the rotation with the big guy. His leadership in the clubhouse is irreplaceable. Alex Cobb’s name has also been tossed around as well as another back of the rotation type guy. Expect New York to land one of them.

P.P.S. These are some fun props. Over 300 strikeouts seems like a mortal lock