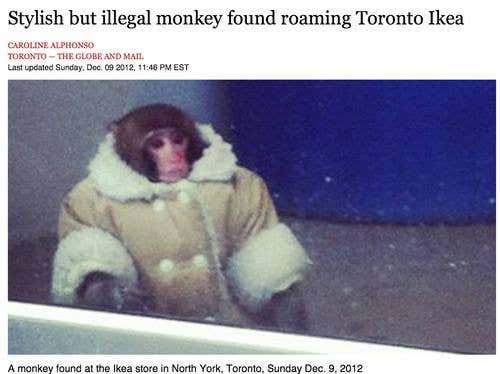 The IKEA Monkey was an all time internet moment. Why is this monkey in an IKEA? Does he have a family that recently bought a new apartment that was in desperate need of miniature furnishing? Perhaps he’s just a big fan of their meatballs? Where did he get that coat? Who even makes coats that small in the first place, there couldn’t possibly be that large of a market for stylish, tiny jackets like this could there?

Two years ago, it was reported that Darwin the IKEA Monkey was at a sanctuary in Ontario living among other macaques, being taken great care of, and growing into his adolescence swimmingly. But it wasn’t all peaches and sunshine for Darwin. They took his coat. THEY TOOK. HIS COAT.

What these people did is they broke into The Louvre, threw some turpentine on the Mona Lisa and gave her a fresh new gap-toothed smile. I understand taking away a baby macaques from an illegal owner and getting him back with his macaques pals. That makes all the sense in the world. But you cannot, under any circumstances, take away his freedom to flex, his leeway to live lavish, his satiability to stunt. That macaques had style and pizzazz most people only see on the silver screen, and these monsters just stripped him of that. Not only did they strip him of his coat, THEY DON’T EVEN KNOW WHERE HIS COAT IS! An internet celebrity like Darwin doesn’t deserve this kind of ending to his legacy. Hopefully someone out there knows where this coat is and it can be given back to Darwin, like Pootie Tang getting his belt back, and his effervescent charisma can be returned along with it where it rightfully belongs.