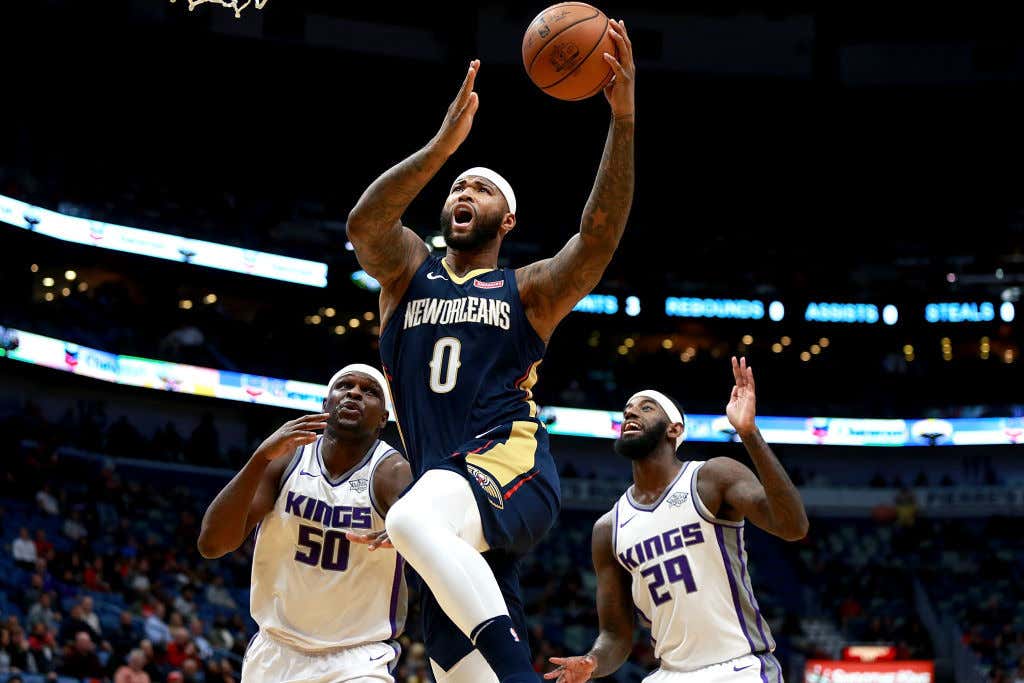 Welcome to a little hung over Saturday afternoon edition of Last Night In The NBA where we catch you up on everything that happened the night before in the Association. Some of you may need something to stay busy as you lay on the couch with college basketball on in the background, or some may be needing something to get them through a rough session on the porcelain throne, either way I am here for you. There were a total of 8 games last night, most of which were fairly entertaining, so here’s what happened.

Chicago, pull up a chair and listen closely. What on God’s green earth were you thinking winning this game in OT?

That’s not the formula. The formula is you get good performances from your young talent to keep fans interested, keep it close if you can, and then lose at the end. They had been doing so good at that lately, for some reason they decided to take things too far and actually pull it out. A big reason why? Baby Dirk

Nice bounce back effort from Markkanen, who while still ending up in double figures, hasn’t shot 50% or better since 11/19 and had been under 39% in three straight. Well his 24/12 on 8-15 (3-5) certainly was an improvement. And look at that highlight video again. Step back threes? Can put the ball on the floor and finish at the rim? Late game scoring? That has to excite you.

Dunn is on a nice little three game stretch of at least 15/6/5, and he’s playing over 33 minutes a night so far in December. For some reason, CHI can just beat the Hornets, with half their win total coming against CHA.

For CHA, not the best loss at home. And on Dwight’s birthday no less! He had 25/20 with 6 blocks to continue his bounce back season

Not a bad showing. Kemba chipped in 20/5 including the gigantic make to sent it to OT, and they got 17/9 from Marvin Williams which is pretty nice

But in the end they ran out of gas.

DET got close, but I can’t say I’m shocked that in a late game situation a Reggie Jackson drive didn’t work out. What did work out was Kevin Durant doing whatever he wanted to the tune of 36/10/7/1/5 on 12-23 shooting

He’s stepped up and filled the void with Curry out just fine, because you remember he’s Kevin Durant and he is also quite good at basketball. Klay poured in 21, and while he couldn’t make a shot Draymond still made an impact with 6 rebounds 13 assists 3 steals and 6 blocks. That’s pretty fucking crazy. It’s also crazy that they got such a productive 16 minute shift from Quinn Cook who had 7 points on 3-4 shooting.

The Warriors end their trip with a 6-0 record and they are starting to look like the Warriors we all remembered again.

For DET, this is now five losses in a row, and you wasted a fantastic Avery performance. Let me tell you, you don’t want to do that.

I would have let him take the last shot personally. Drummond also was relatively quiet, with just 9 FGA and 8 points. Perhaps that’s more a style thing. It has to be tough for a Piston fan because you were right there despite Harris going 4-12 and Stanley Johnson 1-5. One or two makes by them and it’s a different story.

About damn time one of these teams didn’t blow it down the stretch against CLE, so thank you IND for closing things out and ending this streak. One can only vomit so much night after night seeing Lebron end a game on his own. Instead it was Oladipio who had 33/8/5 coming up big

Don’t look now, but the Pacers are now up to a 5 seed, and are 7-3 in their last 10. Crqzy to think IND could sneak homecourt in the first round the way they’re playing? I don’t think so.

and Love pitched in 20 of his own, but CLE didn’t get enough production from everyone else to respond to IND’s huge run in the third=. Only three CLE players in double figures isn’t going to cut it. Also, Jae’s 1-7 probably was a bit frustrating for some. I’ve been there.

How come everybody wanted to make a #FreeJahlil campaign, but nobody will make one for Kenneth Faried? Before Jokic got hurt, he barely played and that’s a shame because he definitely could help another team if they would just trade him. He had 20/10 on 8-10 and was the best player on the Nuggets

he plays physical, he can run the floor, but for some reason, he’s buried on DEN’s bench. It’s not right. The story of the night for the Nuggets was how their second unit came to play. Mudiay had 18/5/5 in his 31 minutes, and as a unit they scored 53 of the 103. This was an important win for DEN to stay in the thick of things for the 4/5 seed especially because all the teams below them have been losing. You take any separation you can get in the West.

For the Magic, tough home showing where you shoot 39/23%. Sure Vucevic looks good in his 21/17, but only four players in double figures and under 90 points ain’t gonna cut it my friends. After their 25 point first quarter, their scoring decreased with each quarter, that’s not ideal. Maybe it’s time to #FreeVucevic too

Remember that super soft TOR schedule? Well to no one’s surprise, they’re on a 5 game winning streak. Pretty standard formula for TOR, where DeRozan does the majority of the scoring, he had 26

Lowry gives you a solid 16/6/8, and they get a random performance from a third guy, whether is be CJ Miles or Serge Ibaka. Last night, it was Ibaka who tied his season high of 21 points on 7-12 shooting

Probably not a great idea for MEM to give up 41 fast break points, that seems just a tad excessive to me. Things look tense as hell as they continue to lose games, Gasol’s body language is not what I would call great. At least Tyreke Evans continue to play some of the best basketball of his career. There is that to be positive about

It may have been closer than they would have liked, but that’s a common story with teams who play DAL recently, but the Bucks still pulled it out behind their own version of a Big 3. Giannis (27), Middleton (31), Bledsoe (24) were the story, DAL had no answer whatsoever for those three

Outside of their loss to BOS, MIL has played well and they’ll look to avenge an earlier loss against UTA tonight

For DAL, look, you’re playing teams tough. That’s all you could ask for a team that is clearly rebuilding. Wes Matthews was the dude for them in this game, with a team high 29 points

A tough loss to blow it in the fourth, but not all that surprising.

Boogie and ZBo have a history. They don’t like each other and it doesn’t look like that’s going to change anytime soon.

The best part about this beef was that it came in a game in which both players played out of their mind. ZBo had 35/13 on 14-22

clearly motivated against a certain someone. That was some vintage big boy ZBo basketball. Then on the other side you had Boogie, who went for 38/11 on 14-30

To be honest, even knowing Boogie is a crazy person, I don’t think he wants to get into it with ZBo. ZBo was Cousins before there even was a Cousins.

And at the end of the day SAC made more plays down the stretch of OT to pull it out and steal one on the road. Shouts to Frank Mason and Buddy Hield for making big time impacts off the bench.

That’s it! You’re all now caught up on everything that happened last night in the NBA. We have 10 games on tonight, including PHI/CLE, MIL/UTA, and HOU/POR. If you miss any of it, I’ll fill you in tomorrow.