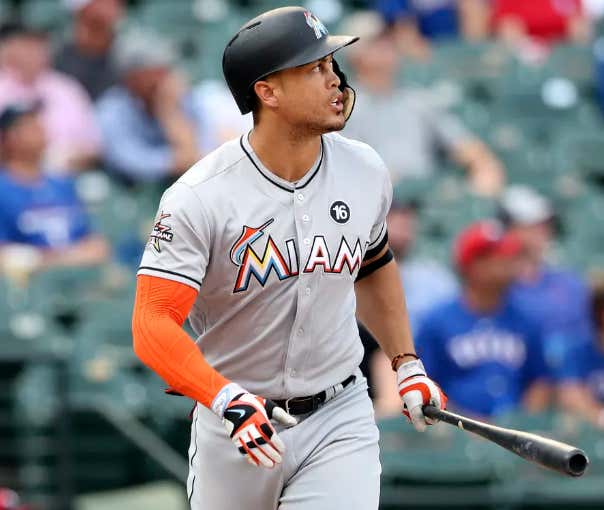 The New York Yankees just acquired Giancarlo Stanton. That’s the funniest sentence I’ve ever typed out in my life. How the hell did we get here? Just a few days ago Shohei Ohtani broke our hearts when he didn’t even sit down with us. Now? Now we’re the World Series favorites after trading for the NL MVP. Don’t ya just love life? Now there is a downside here. Jared Carrabis is probably at the bottom of the Hudson River right now with a cinder block tied to his ankle. I cannot think of a more worse case scenario for him and Red Sox Nation than Big Dick Stanton being traded to the Evil Empire. Laugh out loud funny stuff. As for KFC? Well, he was dead already.

It’s still not confirmed what we’ve given up besides Starlin Castro and non-top prospects or how much of Stanton’s deal we’re taking on so we’ll have to wait on that. Also I guess it’s not completely done and still awaits his physical and approval of the deal, but from all accounts that’s just a formality.

So what does this mean? Well, how about a trio of Gary Sanchez-Aaron Judge-Giancarlo Stanton in your heart of the lineup. You’re lucky if you escape that situation giving up just one run. I have to say, this was not a deal the Yankees had to make by any means. If they didn’t trade for Stanton then everything would’ve been perfectly fine, but the Marlins were in a situation where they had to unload Stanton and their options were thinning out. They had done deals in place with St. Louis and San Francisco, but Stanton used his all-important no trade clause to prevent that from happening. The Red Sox and Dodgers for whatever reason had zero interest in getting involved. The Cubs needed to focus on improving their pitching staff before upgrading the lineup. The Astros needed to avoid a big contract in order to take care of their own. That left the Yankees being one of the last people still at the bar. It was getting late at night and the Marlins had to go home with somebody. The Yankees didn’t offer the best deal by any means, but they were willing to listen. That’s why this deal got done, and that’s why Brian Cashman is Brian Fucking Cashman.

The Evil Empire is BACK. Everyone in the world outside of Yankees fans absolutely DESPISES. the Yankees again. We’re gonna get Golden State Warriors/Patriots hate again. It’s been a while since we got that, but we’re back. It’s gonna be fun being the bad guys.