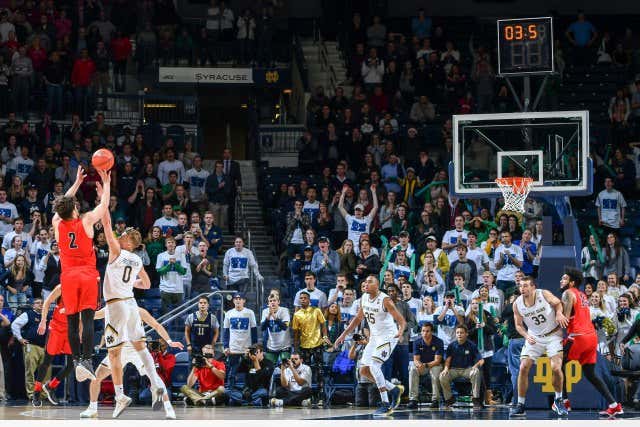 We’re a month into the season and starting to figure out some things about teams. For instance, we know there’s a clear top-3 at the moment with Duke, Villanova and Michigan State. We know the Big 10 is struggling. We know Kansas is going to shoot the ball. We know Bill Raftery is still the greatest analyst of all time. We have a bunch of questions regarding the first month of the season so we’ll get right into it. I’ll have a preview for all the big games this weekend as the days go on starting with tonight’s triple header in Los Angeles.

It’s still going to be Jalen Brunson for me. The other guys have been great, but Villanova isn’t Villanova without Jalen Brunson. To a degree he’s the reason Mikal Bridges has been able to break out, because teams are collapsing on Brunson’s drives and he’s drawing the attention. My pick for NPOY is still Jalen Brunson, which it has been since the preseason. Brunson still has the highest ORtg out of the bunch here. He has the best shooting splits at 69/51/75. Right there though you’re looking at the four picks for All-Big East Team at the moment, but to me here’s the other thing. Rodriguez will likely take a small step back simply because Delgado and Carrington haven’t played up to expectations yet – mostly due to teams just doubling the hell out of Delgado. That will change going forward. I’ll still roll with Brunson who is the best point guard in the country.

This is tough call for me between Xavier and Seton Hall, but I’m going to go with Xavier here just slightly. The reason why I’ll take them goes to the coaching advantage – Willard is a good coach but Mack is one of the 10 best coaches in the country and has proved he can win in the NCAA Tournament. They have the best player on the floor in most games with Trevon Bluiett and they have a supporting cast that can give a bunch of different looks. Seton Hall is going to play a traditional lineup with not much variance just due to the roster makeup, which isn’t a bad thing but I prefer versatility especially come NCAA Tournament time. Xavier can go small with Bluiett at the four, they can go big with him at the three or they can really stretch you out once they bring in Kanter off the bench.

So this is obviously premature and will change from this month to next month. But, in looking at realistic chances of winning the national championship on December 8, there’s only a handful. Granted, this is tough to do because the NCAA Tournament is predicated strictly on matchups, but I’ll say there are 3 for sures and that’s Duke, Villanova and Michigan State. From there I’ll throw in Kansas, Texas A&M, Xavier, Miami and Wichita State as teams with a realistic chance of winning 6 in a row. Again, this is early and will change, but on December 8 I’ll look at those teams.

Yeah, that was a weird game, especially when you just look at the box score. Notre Dame shot 35% from the 3-point line, only turned it over 10 times, got to the free throw line 26 times and statistically beat Ball State in nearly every category. Where the concern is from this game and bigger problems with Notre Dame rebounding the ball. They are an average offensive rebounding team and an absolutely dreadful defensive rebounding team. That’s not surprising when you look at the size and athleticism of this roster, but that needs to improve going forward. Teams can really attack Notre Dame on the offensive glass if they have a couple of bigs while still not letting the Irish get out in transition. If you can drop at least two guards back, let two bigs crash and a wing hover around for a long rebound you can really give them some fits. Notre Dame wants to run on turnovers and rebounds and then pull the ball out and run its offense. Ball State was able to disrupt that.

Well it starts with the fact that Kyron Cartwright is injured. He’s one of the most important players to his team in the country as Cooley’s flex offense is predicated on good decision making and having a point guard to set up the sets. From there it’s a mental thing. This team is playing to the competition, which is something that’s said quite a bit but you have to remember they are still 18-22 year old kids. That happens, especially after you dominate something like the 2k Classic. I still thing Providence will be fine going forward, but they need to get healthy. First and foremost it’s Cartwright. If he’s banged up all year you can just chalk it up to a loss. You have White and Diallo banged up at the moment. Get healthy.

I’m trying to think who isn’t getting a lot of national attention here and this is who I came up with: Kevin Hervey (UT-Arlington), Alize Johnson (Missouri State), Rob Gray (Houston), Tremont Waters (LSU), Khyri Thomas (Creighton) and Nick Weiler-Babb (Iowa State).

It’s not necessarily the most fair to say who is getting the most teams in as the best conference due to conferences having different amount of teams. For instance the Big East may get the same amount of teams in as the Big 10, but it’s not comparable. But the strongest to me is the ACC and then the Big East. When you look at these conferences I like to look at a couple different things: first, how good is your good? Second is just how strong the middle of the conference is and third is how many free wins do you get from the bottom. The ACC has an extremely strong top-5 with Duke/Miami/Notre Dame/Virginia/UNC and then a really good middle group with FSU/NC State/Virginia Tech/Louisville. If I’m ranking the conferences I’m going ACC/Big East/SEC/Big 12/Big 10/Pac-12.

No, I think that’s a little unfair to say, especially the way he’s turned the program around. Cincinnati was pretty irrelevant when Cronin took over and they are now at least a constant threat to make the second weekend. It’s fair to call him out for the record vs Xavier (which fans of both teams do care about) and not necessarily advancing as far as possible in the NCAA Tournament – although I think there’s a little flaw there. He’s continuing to build Cincinnati and is getting a new arena and facilities next year to play with. The real question is what do you think Cincinnati’s peak is? Should they be a consistent Final Four threat? I think that’s a little unreal considering they’ve only made one Final Four in the last 50 years. Cincinnati should be a team that is competing for Sweet 16’s and every few years be a threat to advance farther (which they do this year) or have a set back (due to a new recruiting class). To me Cincinnati/Mick has a little Pitt/Jamie Dixon feel to it just to a little lesser degree.

Because I always cheer for your rival.