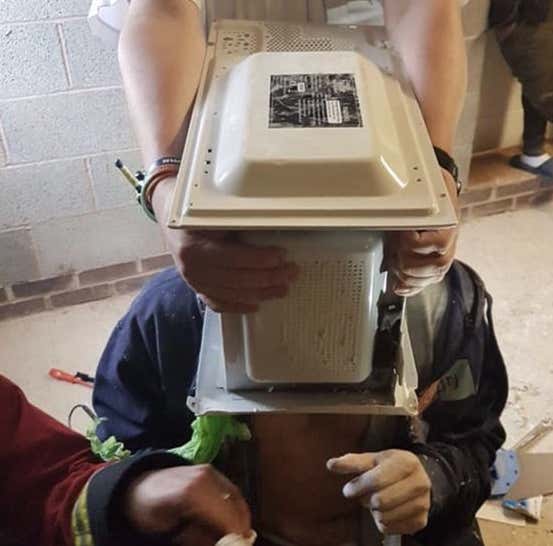 Source - Five firefighters spent an hour working to release a YouTube prankster who had cemented his head inside a microwave oven. The 22-year-old and a group of friends mixed seven bags of Polyfilla before pouring it around his head, which was protected by a plastic bag inside the appliance.

Their intention was to use the microwave as a mould. By the time emergency services were called at 1.49pm on Wednesday to the garage of a house in Fordhouses, Wolverhampton, the group had already been trying to free him for 90 minutes. The friends had managed to help the man breathe through an air tube.

“We video-called our technical rescue colleagues for advice and eventually managed to get him unstuck. He was very relieved when we removed a large chunk of the Polyfilla with a screwdriver, allowing him to breathe more easily. But we had to be extremely careful with the screwdriver, working so closely to his head.”

“It took us nearly an hour to free him. All of the group involved were very apologetic, but this was clearly a call-out which might have prevented us from helping someone else in genuine, accidental need.”

Imagine being a firefighter and getting this call on a Wednesday afternoon? A bunch of day shifters in a race against time to save some kid who cemented his head to a microwave. All while his idiot buddies stand there and watch, tears rolling down their faces because they may get charged with involuntary manslaughter. What a wild scene. You couldn’t pay me enough to respond to that shit show. If I’m the firefighter I’m letting natural selection run its course. It’s not my job to play God. That’s God’s job and he has a plan for everyone. Even if that plan means entering the afterlife with a microwave on your head. I keep thinking about what the funeral would look like. People waiting line, opening the door to the microwave to get one last peek at his face. Do you even go open casket at that point? I don’t know.

You’d think he would’ve pulled it out once it started to congeal, not ask for a breathing straw. I guess I don’t understand what the end game is. Was he trying to get a mold of his face? Was he pulling one of his wacky YouTube pranks? Were they all just really high? It doesn’t seem like they had a plan. Hopefully he thinks things through next time he decides to do a stunt. Chances are the firefighters won’t be so kind the second time around.