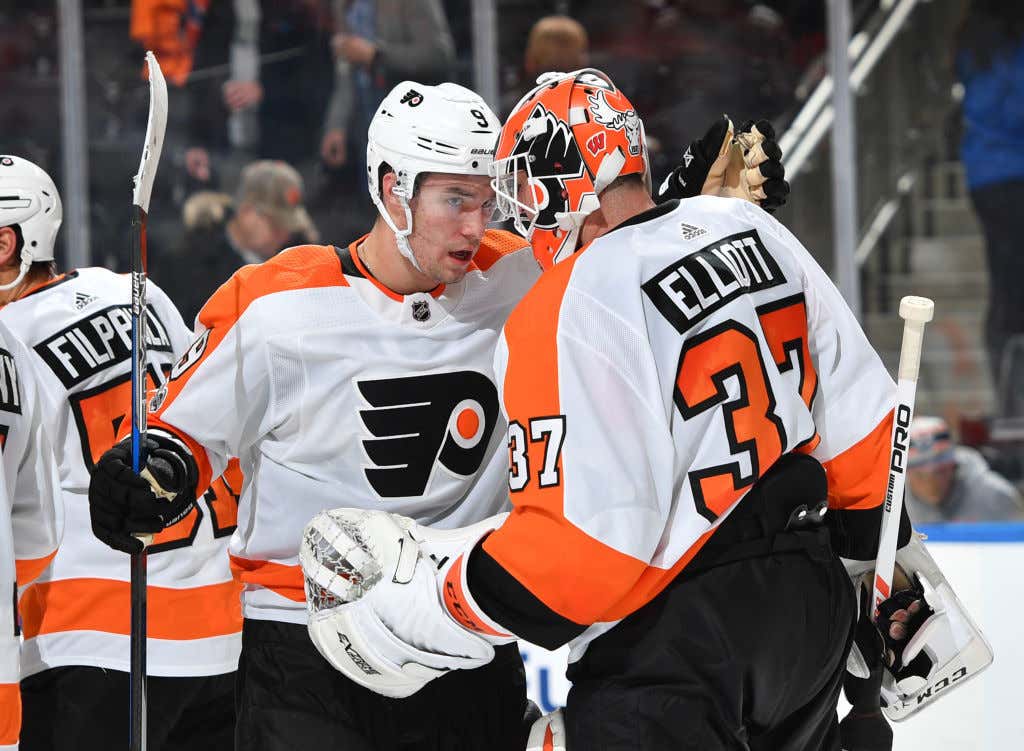 Line Changes Continue To Pay Off

Dave Hakstol got plenty of (deserved) credit when he put Claude Giroux and Jake Voracek on a line with Sean Couturier earlier in the season. They were one of the most productive lines in the league and considering all three of them were in need of a bounce back year, Then the team lost 10 games in a row and one of their biggest issues during that stretch is nobody could score outside of 28-14-93. In the 2 games since the top line has been broken up, goals have been scored by Scott Laughton (2), Michael Raffl (2) Wayne Simmonds (2), Valtteri Filppula, Jordan Weal and Dale Weise. Meanwhile, Voracek has still had 4 assists, Giroux and Couturier have each had 2. So the top guys are still producing without needing to be the ones who actually put the puck in the back of the net.

You had this Michael Raffl goal from last night where Raffl makes a great play with his stick to to break up a pass at the blueline, Voracek makes a great play to grab the puck at the wall and springs Raffl for a breakaway. Like I said after Monday’s win, it’s great to see Reek finally get rewarded with points for his play. And then we also had this play from Claude Giroux which is exactly the thing you’d want to see out of your captain on a struggling team.

I don’t have the numbers in front of me right now but I think Giroux was out on the ice for well over a minute already before this goal. At the end of a long shift, puck gets loose through the neutral zone and Captain Claude still hauls ass to make a play on the puck instead of coasting for a line change. Now unfortunately it was Dale Weise who ended up with the pay off for Claude’s hard work and unfortunately Laurent Brossoit is hardly an NHL goaltender. This means that Hakstol is going to keep Dale Weise in the lineup for at least another 25 straight games and may even consider putting him on the top line. But that’s a gritty play by the captain and you can see how plays like that elevate the rest of the team’s play.

So here’s a powerplay goal from Monday night against the Flames.

Jake Voracek slap pass to Couturier who then–maybe somewhat unintentionally–dishes it over to Simmonds for the tap in. And then here’s a powerplay goal from last night against the Oilers.

Claude Giroux slap pass to Couturier who then snaps off a crispy apple to Jordan Weal for the tap in. Not sure if this is something specific the Flyers have been working on but at the very least, it’s good to see the puck movement come together on the powerplay. I think that’s a good sign of where this team’s confidence is at. After a month of complete dog shit, they’re finally not gripping too tight. It’s so noticeable how much sloppier they are with the puck when they’re always second guessing themselves out there. They’ve cut down on those mistakes in these last 2 games.

Provy and MacDonald got the majority of ice time against the McDavid-Draisaitl line. Obviously it was an away game for the Flyers so the Oilers were able to sneak that top line out against Ghost-Hagg and Sanheim-Alt a copule of times. But for the most part, it was Provorov out there. And here we can see him winning battles against both of them along the boards. Sure, 97 and 29 linked up for a goal but that was on the penalty kill after Couturier lost the puck. At 5v5? I barely noticed McDavid all game and that’s the Provorov Effect. McDavid ended the night with just 1 shot on net. That’s my 20-year-0ld legit #1 defenseman.

Sidenote: it’s a great thing Brandon Manning wasn’t able to go tonight. I know Flyers fans out there have this weird thought process where they believe “Manning is McDavid’s father” because he is in McDavid’s head. But here’s what you bozos don’t realize. You never want to be in McDavid’s head. You never want to give him even more motivation to go out there and end you. For some reason, yes, Brandon Manning very much takes up a bit of real estate in 97’s noggin. I don’t think he thinks about him every night before they go to bed but it’s obvious the few times they’ve played against each other. If Brandon Manning is in the lineup last night, McDavid adds at least 1 goal to his assist last night and that’s a fact.

– Nolan Patrick only had 8:12 TOI last night and 2:26 of that was on the powerplay. As much as I want to give Hakstol shit for this, I think that’s the right decision right now. The team needs to find ways to win games to climb out of this massive hole they dug for themselves and NolPat just hasn’t been able to find his game at the NHL level yet. Now that’s not to say that he should be a healthy scratch or that he should get sent back to junior despite already playing in more than 10 games. But I’m fine with letting him watch the majority of games from the bench for a little while he still figures it out. Fewer minutes equals fewer chances to make mistakes to tank his confidence. He’ll turn it around, I’m not worried.

– Brian Elliott put together a nice game last night. He’s actually been able to string together plenty of good games even when the Flyers were losing but wasn’t able to be the goalie who went out there and stole you a game. Am I totally comfortable with him moving forward? Not exactly. I’ll never have full confidence in any Flyers goalie, at least for the time being. But who knows what a few wins can do for his confidence (yes, obviously restoring confidence is a huge theme for this team right now). Also–I’ll be very interested to see when or if Hakstol decides to go with Alex Lyon who just got called up for Neuvirth.

– One last game on this Western Canada road trip tonight against the Canucks. If they can sweep this trip and win 3 straight, then maybe they’ll earn the right to not come back home to the Wells Fargo Center getting boo’d.