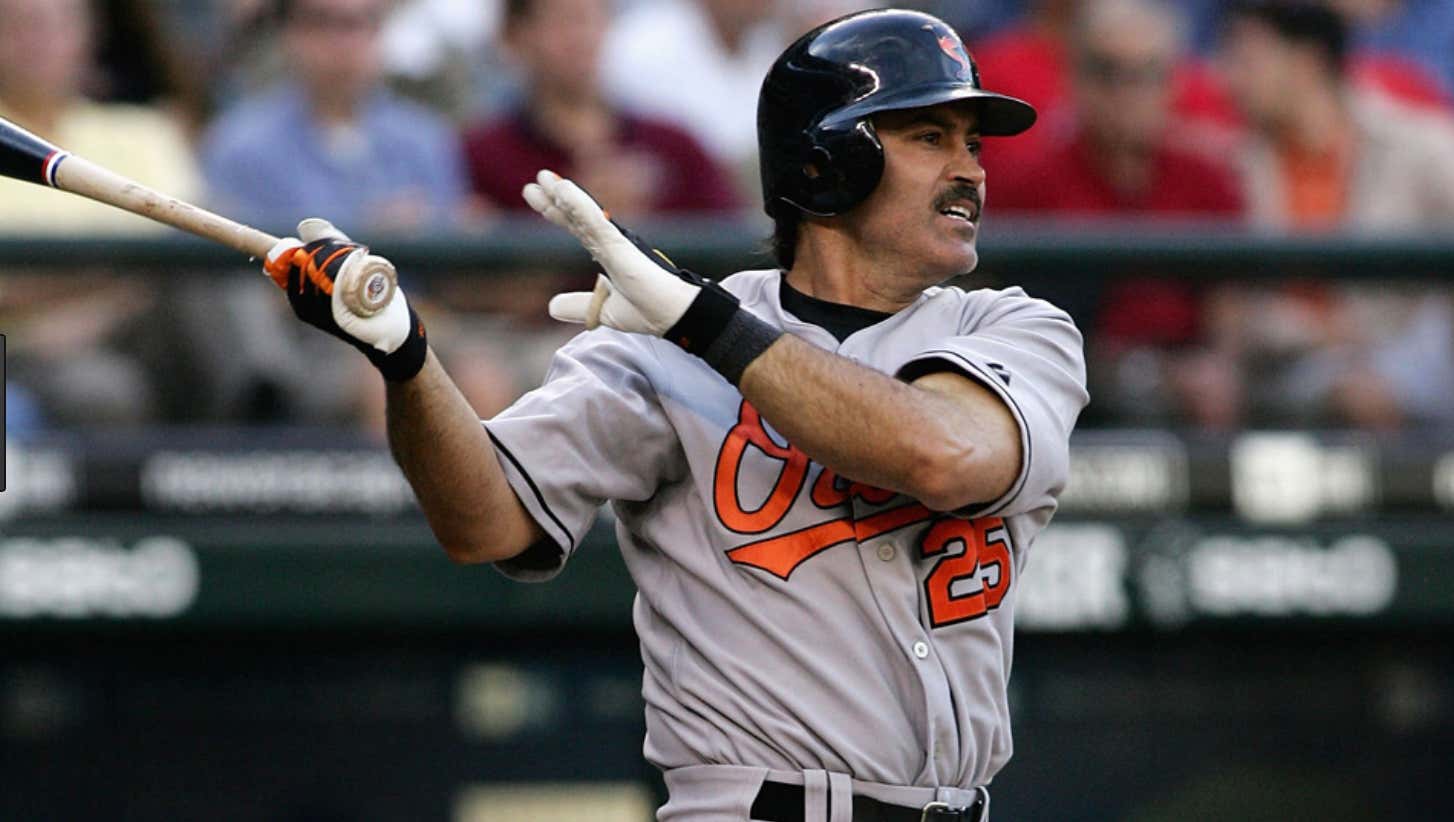 This is what I needed to get me through the long, boring Hot Stove season so far. One of my favorite childhood players, an absolute ball MASHER, Viagra slinging, Gold Glove winning, and one of the smoooooothest swings you’ve ever seen, Rafael Palmiero wants to attempt a comeback to MLB at the age of 53. Sign me TF up. So what he hasn’t played since 2005, according to what Ken Rosenthal wrote yesterday, he is attempting to make a comeback to a major league roster. Jared Carraby covered this yesterday, but as a lifelong Orioles and a HUGE Raffy guy, I had to throw some words together.

Regardless of what he said in front of congress, and the positive test that came after it, you can not deny that Raffy was an unreal talent on the diamond. and one of the best hitters during his time. One of only 4 players to have 200 or more homers for 2 different teams, not easy to do. He’s also one of the 5 members of the 3,000 Hit/500 Homer club. His all time numbers speak for himself. 569 homers, .288 average, 3 Gold Gloves, .371 OBP, 3,020 hits, and 1,835 driven in.  Do I think Palmiero has any chance to make an MLB roster, absolutely not. But I love that he is going to do everything in his power to make it happen.

I am firmly in the camp that Palmiero has been screwed over by the Orioles. He’ll always be remembered for sitting in front of Congress and pointing his finger at them saying that he had never used steroids, only to be suspended a few days after recording his 3,000th hit for having a positive sample. He only played in a few games after he was suspended for the 10 days for his first offense, was injured, and the Orioles basically told him to fuck off and not come back.

Did Palmiero do steroids? He says he didn’t. Raffy said the positive test was triggered by a b12 shot that former Oriole Miguel Tejada gave him. He sticks to that story to this day, and why wouldn’t he? Miguel Tejada wasn’t squeaky clean, and probably gave him something that wasn’t a b12 shot. After all, he was on the Mitchell Report, lied about his age, and got popped while he was on the Royals for Amphetamines which he says was Adderall. But you know who else was on steroids in 2005? Everyone. Your favorite player, your father’s favorite player, your brother’s favorite player. EVERYONE WAS ON THEM. Doesn’t make it right, but the Orioles made Palmiero out to be a monster. He hasn’t been back to Baltimore since the last time he left the park. It stinks.

What makes me happiest about this story is seeing that Palmiero hasn’t let the letdown of not making the Hall Of Fame, which he was guaranteed to make before the positive test, kill his spirit. In an interview last year he told FoxSports.com that he could hit .270 with 25 dingers. He also talks about how it’s all between the ears, and he clearly still has it between the ears. Maybe there is a team out there looking for a smooth fielding lefty who could knock a few out of the park?

I’m not saying I think the O’s should give him a shot in Spring Training, but let’s be real, he can’t look any worse than Chris Davis did at the plate last year (fun fact, Raffy only struck out over 100 times ONCE in his 20 year career. Chris Davis will probably do that in April and May this season).  The Orioles acted how they did after Palmiero was suspended, and haven’t done anything since to him. If A-Rod can get a “front office” job in New York after his suspension, the Orioles can at least put Raffy in their Hall Of Fame.

Sure it was early on, and no one really knew how big this problem was. But the club didn’t act the same with with Brian Roberts after he was mentioned in the Mitchell Report. Roberts is still loved in Baltimore. Now I know it’s different because Palmiero actually tested positive, but they really gave him the shit end of the stick.

You have to give it up for a guy who at his age and the shit he has been through, still wants to go out and prove people wrong and show that he is a good baseball player. I’m sure 15 years ago Palmiero thought he’d be in Cooperstown and making the rounds to all the big MLB events like all the other Hall Of Famers, but that won’t happen for him. This is his final goodbye to baseball. Let him go to a camp for some club, hit .137 and get cut. At least he’s going out cuz he doesn’t have it anymore. That can be his final chapter. He never got to have that final chapter in 2005. It was closed for him.

I’m just saying I think the Orioles should do a good thing and mend the fence with Raffy. It doesn’t have to mean bringing him to camp, there are plenty of other guys in their system who deserve a shot, like Raffy’s son, Preston. But bring him back this season. Put the guy who played in 1,000 games for the O’s and hit 223 homers during his 7 seasons in Baltimore into the Orioles Hall Of Fame. The Orioles had a home run derby last year featuring players from the first team to play in Camden, while Raffy wasn’t on that team, I’d be so damn down to see Palmiero back at Camden and hitting balls onto Eutaw Street. I’m sure that swing still looks the same.

I’m not here to make this a sob story, if he did put those substances in his body, shame on him. If he didn’t, he caught the worst luck in the world.  He passed a lie detector test in 2006, and all of his previous tests, including a sealed sample from 2003 tested negative for anything. So again, maybe he did it and is holding onto a lie, or maybe he got screwed over. Regardless, I think it’s awesome that he’s even thinking about attempting a comeback. Raffy is just a guy who loved hitting homers, selling your dad Viagra, and loves baseball.

Best of luck to the sweetest swing in Baltimore, I doubt you’ll sniff a roster spot, but can’t knock the hustle of the old man. #BringBackRaffy