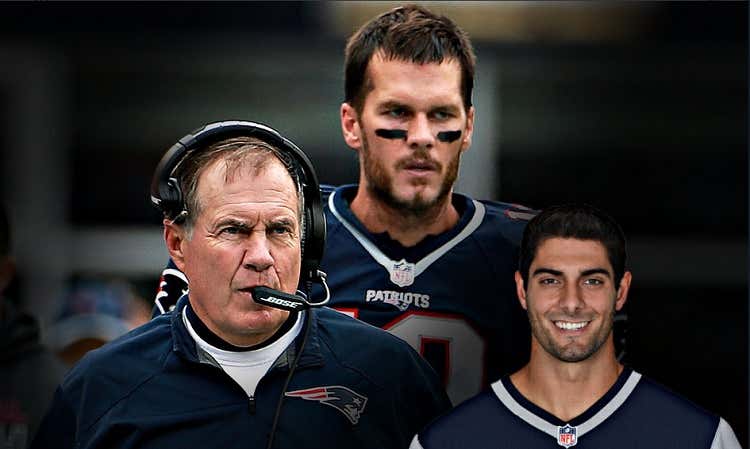 The MMQB – We want to know the magic formula, the potion San Francisco quarterback Jimmy Garoppolo carried in his suitcase from Boston to San Francisco … that would help him for the rest of his NFL life?

“One thing?” Garoppolo said. “I’d say preparation. That stuff that goes unnoticed. Practice. Tom [Brady] used to say you could get better in practice every day. The time you spend on the things you didn’t do in college—studying, watching film, the little things, everything. I was able to watch him for three-and-a-half years, and I hope to carry those lessons for the rest of my career.”

The little things. Brady and Belichick schooled Garoppolo in them. “I was thinking about them on the final drive [of the Niners-Bears game], when we drove for the winning score,” Garoppolo said.

It isn’t the win that was the most notable point of this day, Garoppolo’s first start for the 49ers since the Oct. 30 trade from New England to San Francisco for a 2018 second-round pick. It was the way he won. Wins now for San Francisco don’t matter as much as the mechanics of them, and whether the new kid on the block is getting it. …

“We knew we needed first downs,” Garoppolo said, “and we knew we needed to work the clock. That’s what I learned playing for Coach Belichick. It’s funny you mention that, because I was thinking about that [clock management] on the field. Coach would run through situations like this all the time. … Coach would run through situations during film situations, things you can’t practice. You’ve just got to know.”

Jimmy Garoppolo was thinking about Brady and Belichick? Join the club. We’re getting jackets made.

He’s just giving the world an abject lesson in appreciating where you came from. That stuff about learning from Brady that you can get better in practice every day? Precum. The business about how he was thinking about Bill Belichick during the game winning drive? That is full-on clean up in aisle Jerry’s pants. Bring the mop bucket and the yellow plastic Piso Mojado sign and some of that green sawdust the school custodian uses because it is a mess in here.

This is how you know Jimmy G is going to be one of the good ones. Because he was paying attention here. He gets it. He was a surprise second rounder used to playing in front of 10,000 people at Eastern Illinois and, while he no doubt wished he got taken by some team that would give him a chance to start, he took advantage of his full ride at the University of Belichick. He hit the books. Took advantage of the extra office hours. Got his degree and graduated early.

There’s a reason why all three members of the Wolfpack who began the year in New England started NFL games Sunday. And that Matt Cassel started a game earlier in the year and is still playing at age 35. And Brian Hoyer had starts as well And that Ryan Mallett is still with Baltimore so that makes six QBs developed by the Patriots among the 32 teams. It’s all about teams hoping they can gene-splice the Patriots winning DNA into their own bodies. And if one game is any indication, some of that genetic material is going to take in San Francisco. If they can keep him. Because these comments just made him boatloads of money.