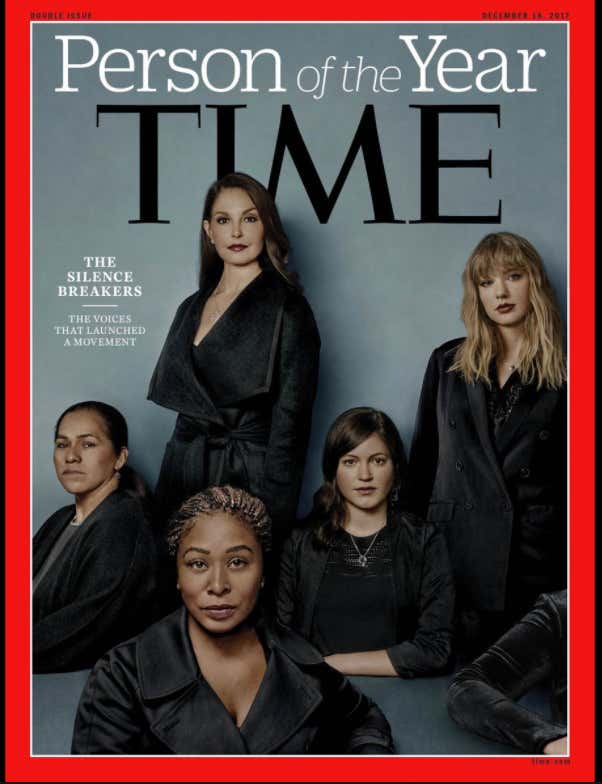 NY Post- Time magazine has named the #MeToo social movement — the woman and men who have come forward with tales of sexual harassment and assault — as the most influential “person” in 2017, the publication announced Wednesday.

“This is the fastest moving social change we’ve seen in decades, and it began with individual acts of courage by hundreds of women — and some men, too — who came forward to tell their own stories,” Editor in Chief Edward Felsenthal told NBC’s “Today” show.

The winner — dubbed “The Silence Breakers” on the magazine’s cover — was selected ahead of a shortlist that included North Korean despot Kim Jung Un, special counsel and former FBI director Robert Mueller, and last year’s Person of the Year, President Trump.

The president last month bragged that the mag had been in touch to say he would “probably” win but he “took a pass” on being named again in 2017 — a claim Time denied.

What a ragtag group of finalists: Kim Jong Un, Robert Mueller, and last year’s winner… President Trump. Even though he was “probably” going to win, Trump recused himself from the race to let others have their day in the sun (lol). Robert Mueller would have been cool but not enough people have a clue what he’s doing. Which leaves Kim Jong Un, and to call him the “person of the year” and throw his silly mug on the cover of the magazine might seem a little unpatriotic. Obviously, those of us who can actually read understand the person is chosen because they are someone who, “for better or for worse… has done the most to influence the events of the year.”

Aside from that, I do think the #metooers deserve it.  You can’t argue their influence on the events of the year and the change their bravery has brought about.   Only Trump has filled my computer screen more than the “silence breakers” this past year, and as we learned above, he told them to give it to someone else. (That’s gotta really grind their gears, huh? They won the award because Trump took pity on them. He’s sitting up there in the White House, staring at his Time POTY award from 2016 thinking, eh, one is enough. It would be like Usain Bolt standing in front of the finish line, waving the next guy forward. C’mon, little buddy! It’s your turn! My neck can’t handle another medal.)

One small issue I have, and maybe it’s the Harvard in me –the #metoo movement is a movement. It’s not a person. If Time wants to give the award to the movement, they need to change the fucking award. You could call it the “Time Thing Of The Year.” That would provide the necessary nounal generality that could include a PERSON, PLACE, THING, OR IDEA. For fuck’s sake, Time! Don’t piss on my face and tell me it’s a person.

Either way, congrats to the #metoo movement. Thanks to their influence, I won’t be speaking to women in 2018. Too scary!