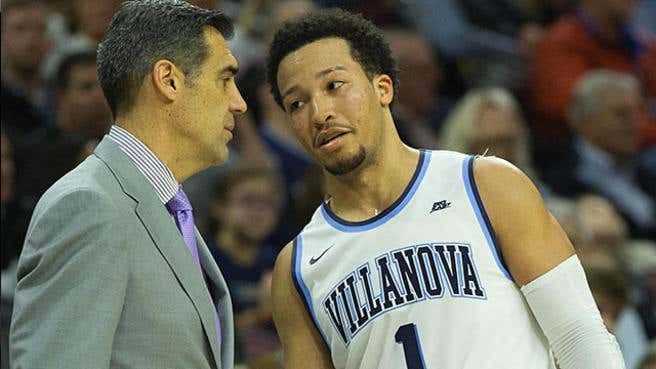 Throughout the first part of this season we’ve heard so much about what has made Duke and Michigan State national title contenders. We’ve even heard a ton about Kansas and what they are possibly getting for the 2nd half of the year and a handful of other teams. But, there seems to be one team that was left out of the conversation – that was until last night’s 88-72 win over a ranked Gonzaga team on national television.

That team is Villanova, who is yet again a national title contender. That is Villanova, who has its most talented roster since Kyle Lowry/Randy Foye/Mike Nardi/Allen Ray put on the Wildcats jersey. So the question is what has made this team so damn good, yet again?

It’s actually quite simple on the surface. It’s the fact they can beat you from multiple places. They have a star in Jalen Brunson. They have a breakout guy in Mikal Bridges. They have shooting with Phil Booth and Donte DiVicenzo. They have a guy who can score at the rim in Eric Paschall. They have a big who can stretch the floor in Omari Spellman. But, everyone knows that. I want to take a deeper dive into the Villanova offense to find out what they are doing that is keeping them a national title contender.

The Wildcats rank 6th in the country in half court offense (based on points per possession) according to Synergy. They are scoring 1.062 points per possession in those half court sets. They are even better in transition, scoring 1.207 points per possession. They are ranked second in KenPom’s ORtg at 120.1. By every measure this is an excellent offensive team and arguably the best offensive team in the country at the moment. We’re going to get into some of the little things Nova does and plays they run that separates them from the rest, but one thing to look at right now is 3-point shooting. They are shooting 41.2% as a team, a number that will likely fall at some point here. Bridges and Brunson are both shooting 51% and Spellman is shooting 45%. Those numbers are likely to take a hit at some point, but by all accounts this team will be a strong shooting team.

I want to focus more on the half court offense than transition here simply because come March teams will slow it down and you need to be efficient in the half court. You can’t rely on constantly getting out in transition. One thing I’ve noticed that Nova does uniquely is how they run some of their ball screens. It’s more of a rub screen/fake ball screen that gives three options. The first is the ball handler (typically Brunson) has the ability to fake the pop pass and drive to the rim. Second is he has the pass to the guy who is setting the pseudo-ball screen. The last is his ability to drive and kick. Nova is surrounding the court with shooters thanks to Spellman’s ability to step out and shoot.

You can see one of the common sets here involving Spellman. He comes up as if he’s going to set that high ball screen that every team in the country runs. It freezes Perkins for just a second. This is where Nova is unique. They are the only team I’ve seen this year that runs this pseudo screen consistently. Once that freeze happens, Nova has already won the possession. Spellman then curls back down to the open space as Nova has a shooter opposite low block – in this case it’s Bridges. The curl by Spellman and cut up by Bridges confuses the defense, leading to a wide open three.

Here you can see the action where it’s a guard coming to set the pseudo ball screen leading to a three. As Booth catches the ball on the wing, you have some action away from the ball. Brunson and Bridges rotate while Spellman and DiVicenzo relocate and fill where Brunson/Bridges were. While that’s happening it’s a complete ISO on ball side where Bridges comes and sets the pop curl screen that we’ve been talking about. That action freezes Perkins again for just a second as Norvell also freezes for a second as he goes to hedge. That allows Booth to get a step ahead and into the lane. This is where Nova has the mismatch. Johnathan Williams is in the post as a rim protector and Spellman can step out and shoot the three. When Nova goes with this lineup (Paschall out, 4 guards in) this action is commonplace.

This team right now is known as a spot up shooting team. That’s fine because of how they get there. They get there by making extra passes and the action we saw above. One thing to note though is we have seen Nova fall because of their shooting. Remember last year I talked about a scary trend late in the year where the shooting just disappeared and it held true through the NCAA Tournament. I mentioned they are currently at 41% this year, which is where they were last year at this point. Do I think the shooting drastically falls off? No, but it is worth the note the highest percentage Nova has shot as a team since 2001-02 season is 39%. It happened in 2001-02. They’ve hit 38% one other time, but it’s mostly been around the 35%. Again, it’s just worth noting 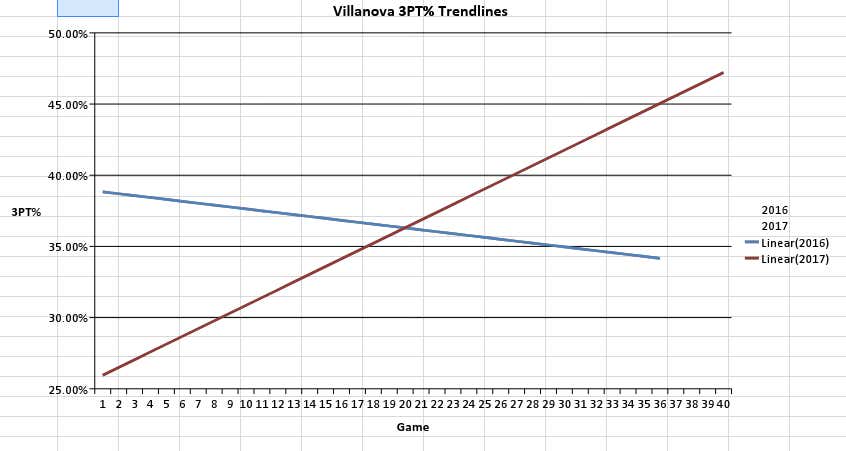 Now where I think this team is different than years past is the fact they can beat you in the lane. Paschall is excellent around the rim. Spellman provides a different post player than Nova has had in the past. But more importantly they have a guy in Jalen Brunson who completely changes this team. Yes guys like Arcidiacono were great, but Brunson, especially this year, provides something different at the point guard spot for Nova. He has the ability to get to the rim and finish there. In fact, we saw Wright do something last night that made my heart flutter. He used Brunson in post up sets. It’s something I never understood why more coaches don’t look to use to their advantage. If you have a guard that is as polished as Brunson is offensively and can finish at the rim, why not put him down there? He’s also an excellent passer and smart enough to see if help is coming to kick to an open shooter. If the shooting starts to diminish this is just something we can see Nova getting more comfortable doing. Bridges has 13 post up possessions per Synergy. Brunson has seven. DiVicenzo is something you can put in the post. It just provides a different look instead of the traditional big inside.

I know it’s not necessarily fair to compare year to year because so many factors change, but it’s weird to say this team is better (talent wise) than the No. 1 overall seed from a year ago. It’s time to start talking about Villanova as a national title favorite with the likes of Duke and Michigan State. They have depth, they have shooting and now they have the versatility to play other ways besides beating you on spot up shooting. Oh, they also have one of the best coaches in the country. Last night’s game against Gonzaga won’t be viewed by many as a great win, but it was a statement. It was one that Nova is still good and still adapting to the roster.