Washington Post - “Prior to the game, on our way, we would take a little shot,” Portis said. “Not like going out and getting sloppy wasted; just adrenaline. You know, you take a shot and you were done with it. Me, Santana and Sean, we did this for a year and a half before anybody knew. We never told anybody. It was just, hey, here’s a little sip, bam, that was it.”

Moss said it was just another form of bonding for the players, and that if it had negatively impacted their performance, they would have stopped. But Portis said other players later started adopting the same habit, and that Zorn thought the players were doing it in honor of Taylor. And so the coach brought it up in a team meeting.

“All of the sudden Coach Zorn came in and ‘Oh yeah, guys are taking sips for Sean.’ What?” Portis said.

I’ll hold it here. This is a fascinating interview by NBC 4’s Carol Maloney with Santana Moss and Clinton Portis, talking mostly about Sean Taylor and Jim Zorn’s role in the entire situation. They spend a lot of time bashing Zorn, and for good reason, even if it comes off as petty at times. Zorn was a notoriously bad coach, not a great leader, and lost the team for a multitude of reasons. But now a decade later we are learning of a brand new reason, and it’s because Jim Zorn is the ultimate dork, who started questioning Santana Moss, Clinton Portis, and others taking a shot before the game:

“And it bothered me when that happened, too, because we [were] doing it way prior to him getting here,” Moss said of Zorn. “So he spoke out about it — Hey, I hear you guys .?.?. you know that liquor is a downer? Don’t you feel down when you drink?

LOL. Imagine that nerd Jim Zorn telling that to Clinton Portis. How Portis and Moss didn’t laugh in his face and stuff him in a locker and give him a swirly is a miracle.

And we’re like, ‘What is this conversation going to?’ And then I remember stepping out of the meeting room and he grabbed me, like, ‘Santana, are you one of those guys?’ And I think he wanted me to tell on everybody. And I said, ‘Coach, look here man, I don’t know about everybody else, but yeah, I’m that guy. But do you have a problem with my play?’”

The coach, Moss said, did not. But Portis said that Zorn “lost the locker room” when he asked players about the tradition.

“He just kind of lost a lot of us,” Moss said. “He said that, and that kind of lost us together when it came to him. Like, ‘Man, he spoke of that name wrong.’ You know, that’s kind of like a low blow. Like, don’t bring his name up in that way, you know what I mean? That’s wrong.”

I’m most intrigued by their reactions to the Redskins removing Sean Taylor’s locker:

“I remember when they came and said they were taking Sean’s locker, and I looked like, ‘Why in the hell would you do that?’” Portis said. “I felt like for this little [expletive] space, this little small space, you can’t leave and block it off so no one else ever sit here? And they moved his locker, and I kid you not, I never cared about football the same.

It’s interesting, because on one hand, they removed the locker in 2010, 3 years after his death, and made it as sort of a memorial in FedEx field for the fans to see: 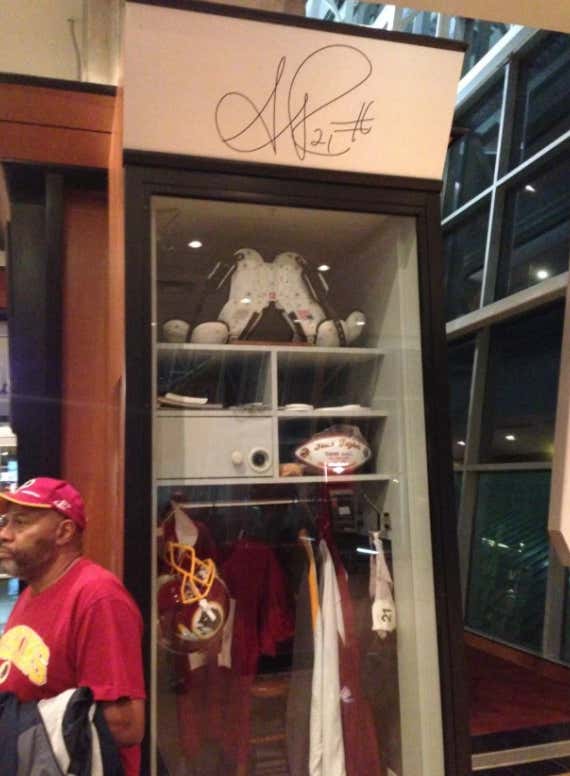 I don’t think you could necessarily expect them to keep the locker in the locker room forever, and making it a tribute to Sean was nicely done by the team. But then if you keep reading, it kinda makes you stop and think about the impact taking out his locker had on the guys who knew him:

Because at that moment, I just felt like we were replaceable. Like, damn, Sean T., the legend of Sean T., and you go and move his locker and just put anybody here .?.?. “

“I think it just became reality, and the realization was we’re meaningless,” Portis said later. “Like, you just snatch the name and change the locker. Like, Sean T.? You know what I mean? If you all do that to Sean T., I don’t mean [expletive] to this organization. That’s the way I felt .?.?. All of the sudden, I’m telling ‘Tana, man, to hell with this. Like, they’re playing around. And I just didn’t care.”

And that’s the thing that struck me. “The realization was we’re meaningless”. We always hear “football is a business”, but when they take out your murdered friend and teammate’s locker and just let someone else occupy the space, it has to be strange. I don’t think Clinton and Santana are 100% correct about it, because everyone knows how much Sean Taylor means to the team, fan, and organization, but I see what they mean by it. Football is so sick like that. I think about it all the time. We are so normalized to people getting devastating, career ending injuries on a weekly basis, we don’t even bat an eye. It’s just next man up, and the severely injured player who needs to play football to provide for his family is forgotten about. So I can’t even imagine what it’s like when a teammate gets murdered, and then seeing his locker just given to some rookie or whatever.

I highly recommend the full interview which you can see here.