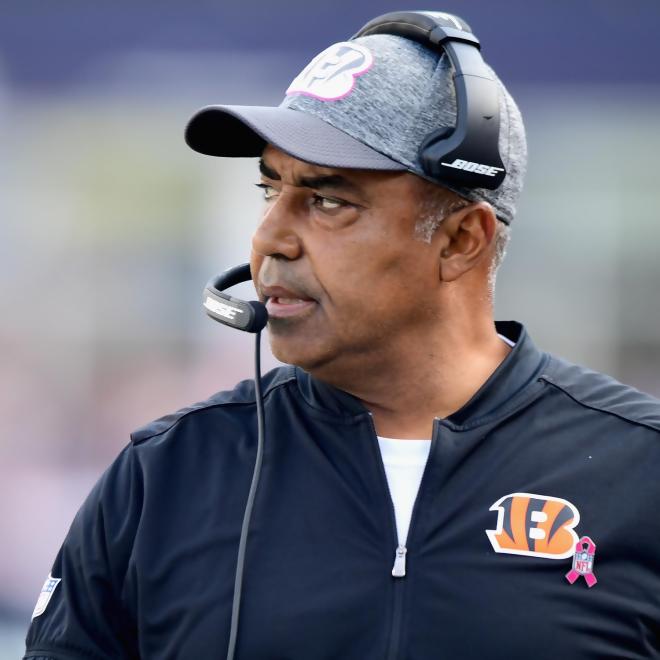 As an update, Ian Rapoport is saying that Ryan Shazier is moving his lower body. Which is great news, but the next 24 plus hours are so supposed to be critical. So there’s that.

And while all that is the big takeaway, I don’t want all that negativity to detract from what else we witnessed last night. Because it was true perfection. We witnessed nothing less than the ultimate Marvin Lewis game. In a long and storied career of bad coaching, this was his finest example. According to Plato, Socrates theorized a world of Ideal Forms, where everything existed in its perfect state. In that world Marvin Lewis will be represented by Steelers at Bengals, 12/4/2017.

–The Bengals blew a 17 point lead.
–The Steelers got the ball at their own 17 and 26 seconds to go in the half and scored.
–Cincy committed 13 penalties for 173 yards, the new franchise record.
–AJ Green had a ridiculous 61-yard catch and run touchdown brought back by a hold on Gio Bernard.
–William Jackson stood and watched Le’Veon Bell tear down the sideline for a touchdown, saying he knew Bell was out of bounds, when he wasn’t.
–Andy Dalton’s 1st half: 173 yards, two TDs and a rating of 120.4. In the 2nd half: 5-for-13 for 61 yards. At home.
–Ben Roethlisberger’s numbers in the 4th quarter: 13-for-19, 131 yards and a touchdown. On the road.
–The Bengals’ numbers in the 4th quarter: Zero first downs, three minutes time of possession. At home.
–After Pittsburgh tied it up with 3:51 to go, Cincinnati went: AJ Green drop, 8-yard run, sack, punt.

And yet my favorite moment, the pluperfect play by a Marvin Lewis team, came on that last drive of the half with Pittsburgh trying to put points on the board finally. History will long remember George Iloka going helmet-to-helmet on Antonio Brown on the game-tying touchdown. But to me, it was all about the one he made on that drive when Roethlisberger went deep up the sidelines to Brown as Iloka went to drill him. And the pass grazed off Iloka’s shoulder pad. To repeat: A defensive back, with the ball in the air, ignored it, passed up  the easy interception that would have ended the half and went in for the killshot instead.

That is Marvin Lewis’ career in microcosm. Players with zero situational awareness but metric shitloads of worthless swagger and attitude. More concerned with dishing out highlight package hits than doing what the situation calls for in order to win games. Especially when they play Pittsburgh, and the results speak for themselves. Because after last night Lewis is 8-24 against them.

I just hope this isn’t the end for the man. The world needs terrible coaches who can’t seem to do anything to lose their jobs, if for no other reason than they make it easier to appreciate well-coached, disciplined teams who aren’t all punks. So please, let’s all put Marvin in our thoughts and prayers for a return in 2018. Sometimes the first 15 years of awful failure just aren’t enough.