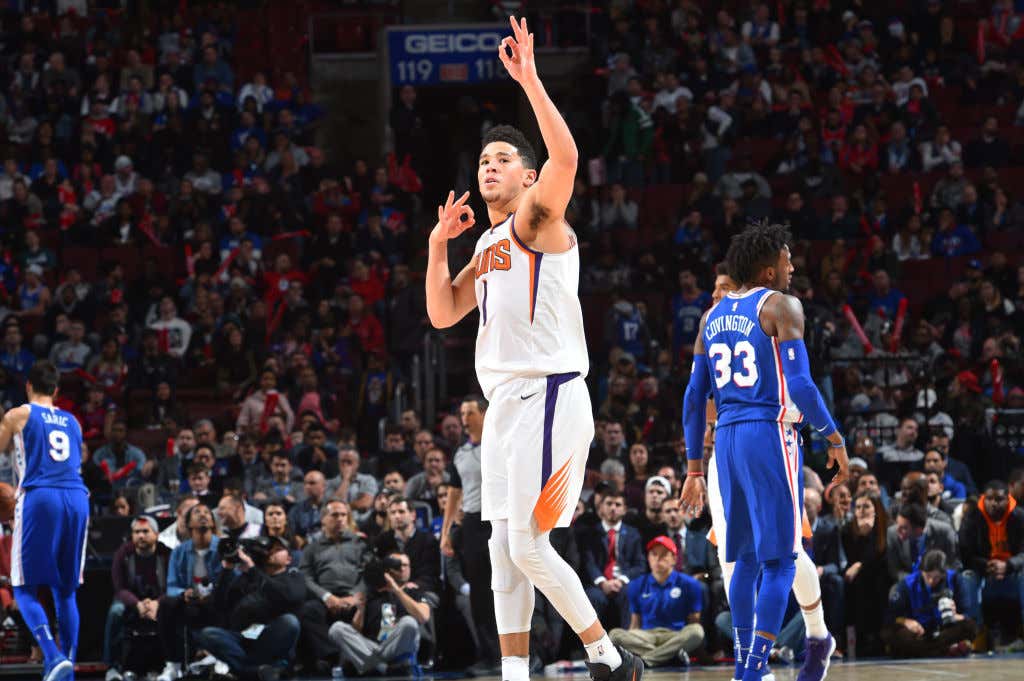 Welcome to another edition of Last Night In The NBA where we catch you up on everything that happened the night before in the Association. There were 11 total games last night so don’t feel bad if you missed something, but I can tell you this was one of the more fun nights in the NBA, filled with surprises. Buckle up because we have a LOT to cover. Here’s what happened

Welcome back Kemba Walker. After missed the precious two games (both CHA losses), Walker was back in the starting lineup and instantly back to his old tricks. His 29 points were the more he’s scored since 11/17, and this marked the first time a player in CHA franchise history had 200 games with at least 20 points

It was that sort of night for CHA, as Dwight also moved passed Paul Silas and Dikembe for 19th all time on the NBA rebounding list. He only had 12/9, but he did do this to Vucevic

For ORL, they were right there late until Speights had a mental breakdown. Maybe he was frustrated by his 1-7 performance, but that flagrant foul on Cody Zeller came at a bad time to say the least. It’s hard to put the total blame on just one guy though. I mean 20 TOs leading to 29 points for CHA I’d argue had way more of an impact on why ORL came up short. It’s crazy this team started 8-4 and has gone 2-11 since. Talk about crashing back down to earth

The Knicks continue to be undermanned, and their results show it. The Pacers, who had their full roster, to put it nicely, fucking killed NY. Seven players in double figures, 55/42% splits, this snapped a little two game skid. IND is a weird team in that they clearly struggle with the better teams in the East, but they feast on the shitty ones.

Oladipo continues to fill an entire stat sheet with 16/5/4/1/2 on 6-10 including 3 made threes, and then there was Lance. One of those type of players that always annoys you when you play against him, but other than that, does fun shit like this

This was the first of a nice little home stretch for IND, with CHI/CLE/DEN/OKC/DET on deck.

For NY, there’s no spinning it, they really need their two best players. Shocking I know. Not having either Porzingis or THJ available left them with very few options. I mean who was going to make up that difference? No starter other than Beasley ended up in double figures, in fact, just three Knicks players did. If not for Dougie McBuckets and Hernangomez, the Knicks probably shoot in the low 30s, while also turning it over 17 times. Gross.

Full blog is coming you know this, but how are Celtics feeling right now as the best team in the NBA through 25 games?

I’m not sure what part of The Process this was, but no two ways about it, Devin Booker destroyed the Sixers. I mean he also destroyed the Celtics in the game before, but the Celtics aren’t frauds and actually won the game. This was a bad home loss for PHI who is quietly close to being out of the playoff picture all together. It’s very early obviously, but man what a show. 46 points on 17-32 with 5 made threes.

If you can believe it, the Sixers didn’t just have problems with Booker, they also had their hands full with TJ Warren, who had 25 on 12-19

It was also impressive that PHX only had 11 TOs, but I guess when you’re spending every possession scoring, there isn’t any room to turn it over.

For PHI, it’s not like they didn’t have their full roster or anything. Everybody played, and some guys actually played really well. For example Embiid gave them 22/12 with 4 blocks on 7-18

hell even JJ Redick threw in 25 points, which was the second highest of his season.

So this wasn’t a game in which none of the Sixers showed up and PHX stole a game. The problem seemed to be more that Covington couldn’t hit a shot (3-11 and 2-10 from deep), and their second quarter really killed them.

Even Embiid came out and admitted it. He said after the game “We took them lightly, and we paid for it”. The good news for PHI fans is this is the first time they’ve lost to a bad team in quite some time. Probably not since their 109-108 loss to SAC a few weeks back. As it stands now they have a .5 game lead on the 6/7 spots, and a 1 game lead over the 8 spot with NY/MIA just 2 games back of knocking some teams out. Can’t lose games to PHX.

Someone had to win this dogshit matchup, so thank heavens it was BKN! Caris LeVert was their best player off the bench with 17 on 7-13 to lead all Nets scorers

but as a team they had 48/41% splits and got revenge for the 112-102 loss to the Hawks in their last game. Rookie Jarrett Allen also had his second consecutive strong game agains the Hawks with 11 points on 5-6 shooting, and despite the fact that BKN turned it over 22 times, it didn’t seem to matter. That’s how you know you’re playing a bad team.

For ATL, per usual Dennis Schroder led all scorers with 19 points, but outside of that it was a dumpster fire. The Hawks finished with 36/30% splits and 18 TOs, and after what seemed like a promising first quarter, they wouldn’t score more than 22 in any quarter after that. Not great!

A nice little revenge game for Wade as the Cavs won their 12th straight. I know we should be impressed because 12 game streaks don’t happen often, but allow me to take a look at who they’ve beat over this streak.

I see like 1.5 good teams in there. But credit Lebron, he looks fantastic

Wade was also clearly motivated to play the team he just left, which is weird because it’s not as if he should have any ill will towards the the Bulls, but he was great as well

Also, Wob brought this to my attention. Spooky to say the least

For CHI, who really cares right? Baby Dirk was solid iwth 13/7, Dunn continued his strong play with 15/6/5 and nobody with a brain expected them to hang with CLE even for a second. You think Chance cares that the Bulls got killed? No chance (pun not intended but intended)

Do you think the Grizzlies were excited to break their losing streak? It’s hard to tell

The nightmare is over

For MIN, badddddd loss. Jimmy Butler could only do so much with his 30

because it’s hard for MIN to win when KAT/Wiggins combine for just 19 points on 8-23 shooting. And yet, they still had a chance to tie but Butler’s desperation three didn’t fall. I did not expect this game to be as close as it was, with 14 lead changes in all, but if there’s one thing the Timberwolves are good at, it’s being inconsistent. They haven’t won or lost two games in a row in their last 8, alternating each time.

Obviously the takeaway will be Durant vs Boogie, both of whom were ejected right at the end. While I commend Durant for being brave enough to get into it with a legit crazy person, he has to know that Boogie would absolutely murder him. There are few things Durant loves more right now than getting thrown out of NBA games. It’s probably 1. Getting Buckets 2. Getting thrown out.

We’re only a matter of minutes away from a think piece about how the Warriors’ attitude is ruining the NBA. It’s coming I can feel it.

For NO, tough loss because the final score does not show how close this game really was, even with no AD. Jrue Holiday was fantastic with 34/6/4 on 13-21

Hell, the Pelicans went with a three guard starting lineup, and even Rondo went vintage Rondo with 10/5/11. It’s a real shame the Pelicans turned it over 21 times, 7 of which came from Boogie, because if they instead just hit their average, they probably win.

Man this shit has to be frustrating as hell if you’re a Nuggets fan. Don’t look now but DAL has now won 2 in a row for the second time in 6 games. A large part of that is the play of Dennis Smith Jr, who was solid as hell with 20/5 on 9-16 shooting

For the second consecutive game, the Mavs had a wire to wire win, it was their highest point total of the season, and it would appear they are starting to turn things around. Not in a “they’ll make the playoffs” kind of way, but more of a “they won’t be a roll over team” kinda way.

Harrison Barnes also put up his fourth 20/10 game of the year, after not doing that at all at any point last season.

For DEN, this was the most they’ve allowed an opponent to score since the Rockets had 125 on them 6 games ago. Jamal Murray had 22 on 7-12

and Gary Harris had 21 on 7-17, but it’s clear they miss Nikola Jokic. You know who has come on recently though? Will Barton. It’s almost as if he’s taken the momentum from his game winner and 37 points against CHI and run with it over these last few games. He had 23 last night including 4 made threes

Either way though, DEN plays in too tough a division to be losing games to the Dallas Mavericks, that’s a fact.

This was about as prototypical of a Spurs win as you can have. It was balanced, with 7 guys in double figures, nobody scoring more than 17 points. It had defense, holding DET to 41/29% splits. And it had clutch late game execution capped off by a big play from Manu Ginobili. Safe to say we’ve seen that recipe a few times from SA.

Here’s what you don’t see often. You don’t see three starters all with at least 12 points and 10 rebounds, but that’s what LMA, Gay, and Gasol did. It also helps to make 14 threes

but come on, tell me this wasn’t the most Spuriest possession ever

For DET, it’s looking like they used all their offense to beat BOS/PHX, because they are having a tough time scoring the ball in their three losses since. Under 94 points in two of them, and 103 in the loss to PHI, they are going through a rough patch no doubt. Reggie Jackson did lead the way with 27 points

but help was hard to come by. Scoring 40 points in the second half probably isn’t going to cut it against a team like SA, and Avery’s 1-9 (0-4) performance probably is tough to swallow for DET fans given the final score. Just when it seemed like they couldn’t miss in that first half, Pop probably yelled a bunch at halftime and it was curtains for the Pistons offense.

But hey, if you’re a Jazz fan, you’re pretty jazzed about the play of Donovan Mitchell and Alec Burks, who had 48 points combined

Burks has been on fire lately off the bench for UTA, and that’s good because outside of Mitchell the UTA starters stunk out loud. Only 28 points came from starters not named Mitchell, and thanks to the bench the Jazz finished with 56/47% splits.

For WSH, no, just no. You should be embarrassed and ashamed about your performance. We will not talk any more about it.

And that’s it! You’re now all caught up on everything that happened last night in the NBA. We have just 3 games tonight, with the best matchup probably being WSH/POR but after seeing them last night, who knows how good that’ll be. Nonetheless, check back here tomorrow and I’ll tell ya all about it.