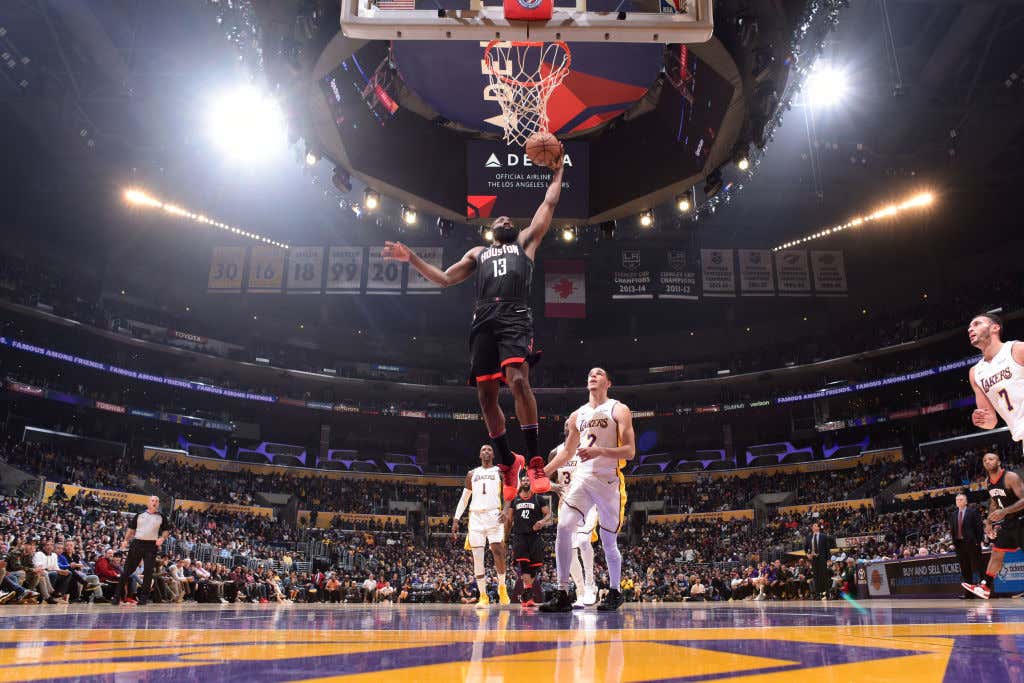 Happy Monday and welcome to another edition of Last Night In The NBA where we catch you up on everything that happened the night before in the Association. Given that it was Sunday, you were probably enjoying the lat of you weekend watching NFL football all day. You may have not even realized that there were 5 NBA games yesterday, most of which were actually pretty entertaining. That’s OK, don’t worry, I’ll tell you all about. Here’s what happened

With no Porzingins, no Hardaway JR, I don’t know many that expected the Knicks to win this game, and the fact that they got down 17 points early wasn’t all that surprising. However, it was almost a disaster for ORL as came back from that lead to te it midway through the fourth. Fortunately for ORL, they had Nikola Vucevic.

He was huge down the stretch, and finished with 34/14 on 13-19 shooting. It was clear that the Knicks didn’t have anyone that could make things difficult, I mean it’s not as if you hear the worlds “elite” and “defense” when talking about Michael Beasley or Enes Kanter.

The Magic did get a bit lucky because they survived a game in which Aaron Gordon would go 3-11, and they did that because the rest of their starters picked up the slack, finishing with no fewer than 15 points.

For NYK, I commend their effort despite being shorthanded, but health is really starting to take its tole on the toll. They are now 1-4 in their last 5, and have currently fallen out of the playoff picture. Tons of time left in the season, but this is most definitely a rough patch. Again, this is to be expected when your best players go down.

The Warriors did that thing again where they score an insane amount of points and shoot 56% from the field. Few teams on the planet can beat them when that happens, and the Miami Heat are certainly not going to be one of them. The GS Big 3 accounted for 73 of the 123, and they did it by making 9 of the 11 threes GS made

Here’s a fun fact. The Heat scored 36 points in the first quarter, and things were relatively close. They then scored 35 points the entire second half. That’s not great!

For MIA, if you’ve finally learned the names on the roster as a true fan who in no way just started watching because of Lebron back in the day, you’re probably relieved that Goran Dragic snapped out of his little funk. He finished with a team high 20 points on 7-10 shooting.

and how bout my man Kelly Olynyk! Not just the owner of the 4th best 3P% in the NBA, but someone who has bounce!

The Heat have lost 3 of 4 and like the Knicks, are currently on the outside looking in of the playoff picture. How sad. I get that not having Whiteside hurts them against most teams, but I’m confident in saying it makes no difference whatsoever against GS.

The Clippers had no business making this a close game, and the Timberwolves defensive issues almost cost them what would have been a brutal home loss. Thankfully, they traded for Jimmy Butler this summer and that fourth quarter was a big reason why. He took over, scoring 20 of his 33 points in the final frame, allowing MIN fans to exhale just a little bit

They sure as shit needed it to, with Wiggins/KAT/Teague going a combined 15-38. I will say this though, guys like Jamal Crawford did make big time buckets early in the fourth to keep the Clippers at bay, but that defense, that defense is 100% still a problem.

For LAC, a tough loss because even with missing like 90% of your team, you still had 50/44% splits, and made 15 threes. That usually gets it done at the NBA level. Now the 16 TOs certainly hurt, but at least Austin Rivers showed up!

After a little 3 game winning streak against NBA powers like ATL/SAC/LAL, the Clippers have now lost 3 straight to UTA/DAL/MIN. Just blow it up already would ya?

You want to talk potential disasters, look no further than the OKC Thunder. With Popovich sitting basically his entire team, and Kyle Anderson getting hurt, no starter other than Dejounte Murray making more than 2 FGs, and as a team shootying 40/28% with 17 TOs, the Thunder nearly lost this game. They blew a 21 point lead and found thenmselves up just 3 heading into the final quarter, where both teams cored 14 points. Look it wasn’t the most amazing basketball we’ve ever seen, and I think that says more about OKC than it does SA considering OKC played all their dudes.

OKC had just two guys in double figures, Westbrook with 22/10/10

and Steven Adams had 19/10 on 8-13. Melo and PG13 combined for a stellar 6-27, and watching OKC down the stretch was painful as hell. Back to the bad iso habits, it’s crazy we’re at this point of the season and the offense looks so poor. You can only say “it’s early’ for so long before finally accepting that there are serious issues. There are tons of other teams that are made up of new talent, and they seem to be figuring it out.

For SA, you have to be pleased with Murray’s night, he finished with 17/11/5, reminding all of us that SA is going to find steals at the end of every draft ever for the rest of time.

And finally, for the late night crowd, it was the current leader for MVP in my mind going into LA and making quick work of the Lakers. Sure they kept it close for a quarter, but then the Rockets woke up

Those three were the only Rockets in double figures, but when you combine for 79 of the 118, you don’t really need anyone else. I mean shit they nearly outscored the entire Lakers team for crying out loud. Eric Gordon got it started early, and then from there it was the Harden/CP3 show.

The Rockets have now won 7 in a row, all by at least 14 points, their 6th straight on the road (all by at least 15) and 13 of 14th overall. Hot damn. And how about this, last night they actually played defense, causing 21 TOs.

Best team right now in the West? You could make a case.

For LAL, at least they got another great performance from their star rookie. No, why do you always think I’m talking about Lonzo Ball. He went 0-4 and had 2 points 3 assists and 3 TOs. He’s back to stinking. I’m talking about Kyle Kuzma who had 22/12 on 8-16 shooting

You should also be encouraged by Brandon Ingram, who threw in 19/9/5 in a team high 37 minutes

But sadly, shooting 38/32% and being that careless with the ball against perhaps the best team in the conference, is not smart.

And that’s it! You’re now all caught up on everything that happened the night before in the NBA. There are a shit ton of games on tonight, 11 in total, including some good matchups like BOS/MIL, GS/NO, DET/SA, and WSH/UTA. If you can’t catch it all that’s fine, just come back here tomorrow morning and I’ll fill you in