Let’s start off by saying this. Gronk is obviously a goon for this cheap shot. With that being said, sometimes emotions take over when you’re playing a contact sport. Does that excuse this play? No. But let’s not act like you’ve never been angry and let your frustration take over for you. That shit is just a part of the game whether you want to believe it or not. And since frustration is a part of the game from time to time, enforcers are a part of the game as well to make sure that chicken shit like this doesn’t happen on the regular. You want to launch yourself at a guy’s back/head when he’s already on the ground? Okay. Just know that your face is going to be used as somebody’s personal punching bag immediately after. Or at least that’s how it would go down on the ice.

But yesterday during the Patriots vs Bills game, the result was absolutely nothing. Just a couple of guys trying to get out of the way and then begging the officiating crew to call a penalty. 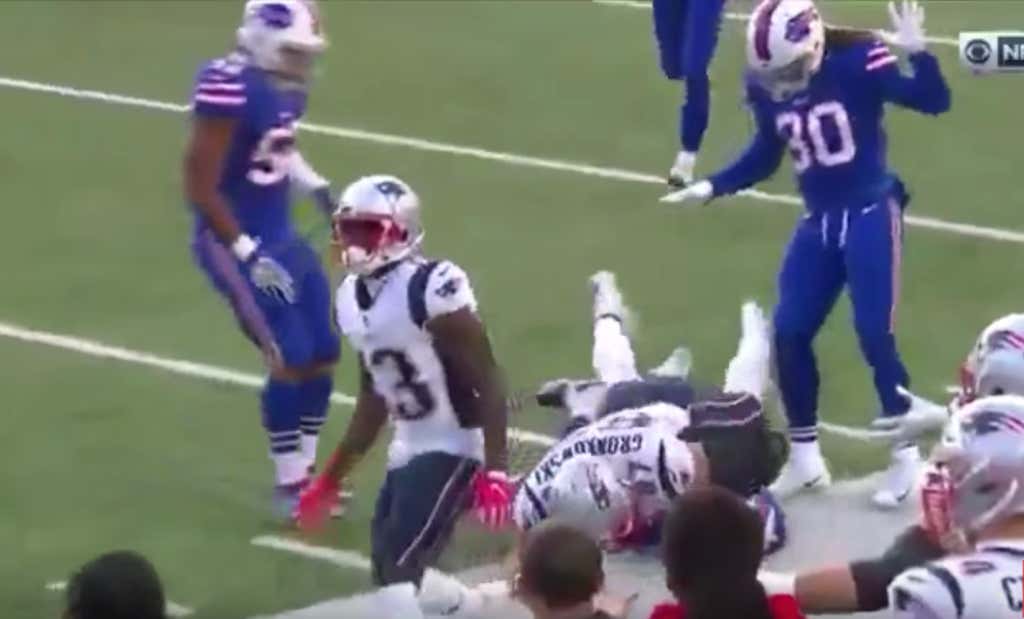 This screengrab right here, folks, is all the evidence you need to prove that football players are softer than hockey players. A cheap shot like this happens on the ice and at the very minimum you at least have a line brawl on your hands. There’s a very strong possibility that you have a bench clearing brawl. What you don’t have is teammates of the guy who just got hit trying to get out of the way and waiting for the refs to do something about it. Sometimes you have to police the game yourself. The fact that Rob Gronkowski was able to just get up and walk away without even having to think about defending himself is bothersome to say the least.

I just hate that I constantly have to be right about hockey players being the toughest athletes in the world. I want nothing but to be proven wrong one day. In a perfect world, football has enforcers and basketball has enforcers and baseball and soccer and eSports all have enforcers. Unfortunately that’s just not the case right now and hockey still reigns supreme. It’s a damn shame. I still have hope for the future, but this clip shows that we still have a long way to go.