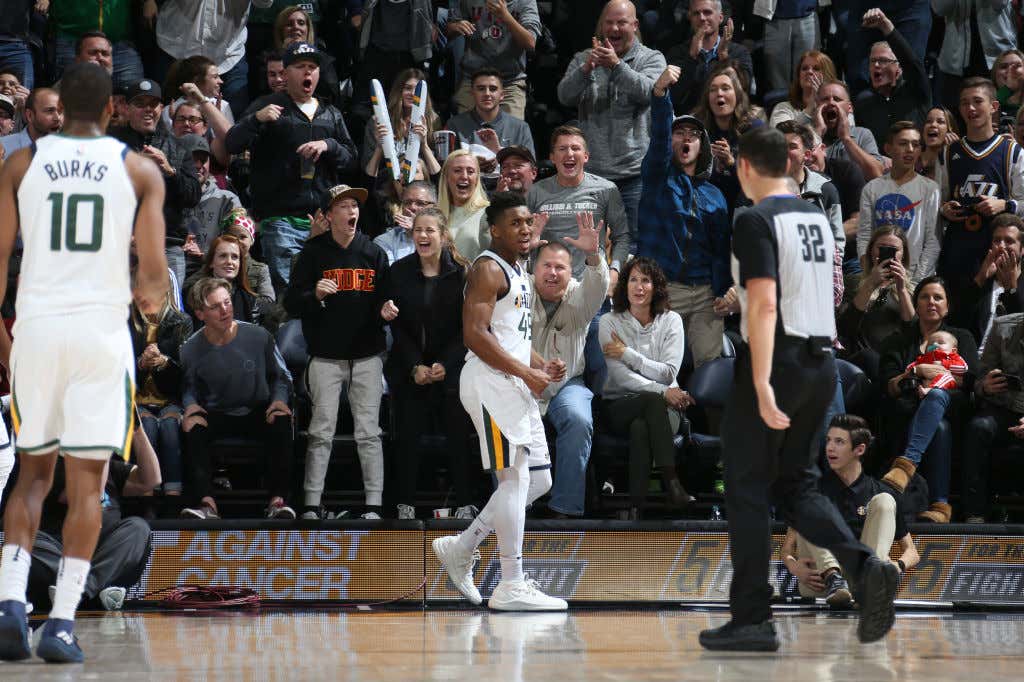 Welcome to Last Night In The NBA where we catch you up on everything that happened the night before in the Association. There were 8 games last night, and chances are you were out living a life and right now you’re feeling a little hung over. Well, let me help you by showing you a shit ton of videos about what went down.

There are a lot of things to be jealous of when it comes to the Warriors. Their roster, their shooting, their defense, you name it the Warriors probably do it well. For me, I’ve always been envious of how they move the ball. Well last night was a display of the best ball movement of any team so far this season. The Warriors finished with 46 assists, I mean that’s simply insane. Did you know the last time the Warriors didn’t lead the NBA in assists per game was all the way back in 2013-14? I mean who beats the Warriors when they put up 133 and shoot 62/50% and their Big 3 do this

Durant got ejected for the 2nd time in his career which is all the rage right now, but by then the Warriors had already bukakke’d the entire city of Orlando.

For ORL, don’t too hard on yourself. This happens to certain NBA teams I’ve heard. I mean I haven’t seen it against the Celtics, but you see it from time to time around the league. The good news for ORL fans is Aaron Gordon’s leap season is LEGIT

29/7 on 12-23 including 5 made threes, I don’t really care if it was a blowout, you do that against GS that’s impressive. Gordon has 15 3PM over his last 3 games, so it would appear that his hot three point shooting in October is here to stay. I bet there are a ton of GMs who are watching Gordon blossom this season that are mad at themselves for not stealing him earlier when ORL’s front office was on the way out.

He Who Should Never Be Googled had 22/5 as well on 8-15, and the Magic did cause 19 TOs which usually leads to wins, but again, the bukakke.

Man, did the Wizards need this win. They were fortunate too, because they beat one of the better teams in the East while Beal went just 4-11. Losers of 3 of their last 4, they were looking to get above .500 at home, and thanks to Markieff Morris and Tomas Satoransky they were able to do that.

Those two carried WSH, combining for 40 of the 109

A 28 point fourth was probably a nice relief for WSH fans, as was the beatdown in the 3rd quarter that they won by 20.

For DET, you almost forgot watching this team recently that they only average 105 a night. This was DET falling back to earth and what it looks like when they don’t shoot 105% form everywhere on the floor. Andre Drummond was his usual beastly self with 14/17/7, and what impresses me most about 2017 Drummond is what a better passer he is. Every game you look and see he had 5,6,7 assists. It’s a credit to how Stan Van Gundy has changed the way they use him.

Now tonight is where things get fun for DET, as we have the rematch with PHI and Embiid, which incase you forgot

Another important Eastern Conference matchup that will probably matter when it comes to playoff seeding. The Raptors have quietly won 3 in a row, and 7 of their last 9. Did you know they’re 8-1 at home? That’s the best record in the East, and the fewest losses in the entire NBA. A lot of the talk so far has been about BOS/CLE/DET, but it’s the Raptors that are tied with BOS for the best point differential in the East.

In this game, things were pretty balanced for TOR, they had 8 players in double figures, and guys like Powell/Poeltl/VanVleet combined for 39 points on 17-25 shooting off the bench. DeRozen led the way with 26

And Serge Ibaka came back from the dead after Dwight murdered him to put up a solid 15/8 on 6-10. I don’t want to get TOR fans too excited, but this is the rest of your month 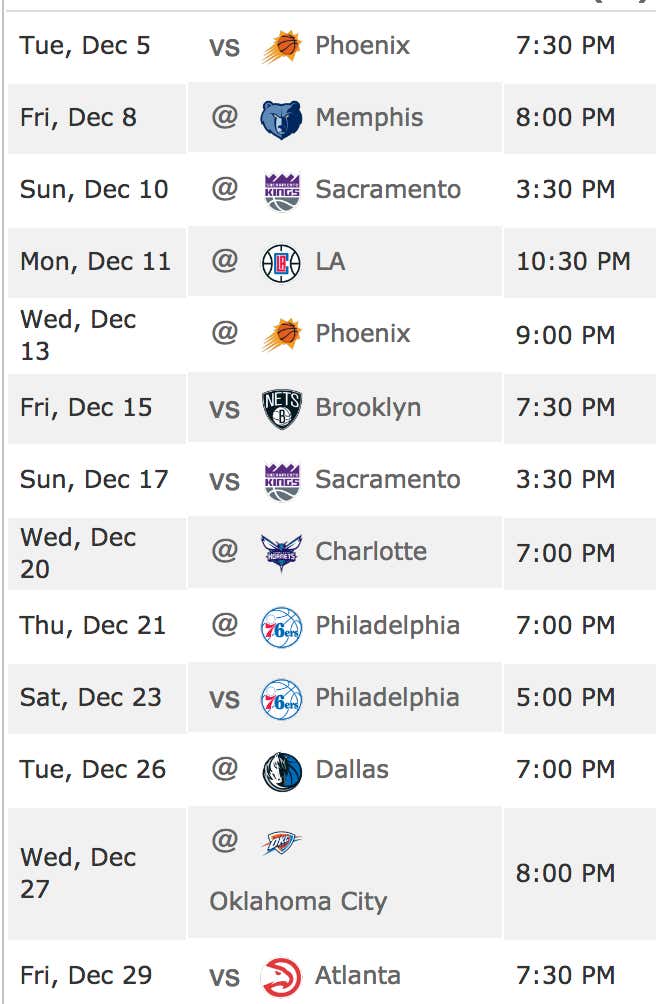 For IND, they once again got a fantastic performance from Oladipo to the tune of 36/7/6 on 14-22 shooting

The second quarter is what let IND down, as did a brutal late fourth quarter 8-0 run, and Sabonis going 2-11 sure didn’t help either. The Pacers continue to be inconsistent, and are in a little bit of a skid losing 3 of their last four, including against teams at the top of the conference. It’s too bad they were unable to steal this one and have a 2-0 head to head record against TOR.

and Dion did his thing with 19, including a huge clutch three late. In this weird world, statistically Dion Waiters is one of the better clutch players in the NBA, crazy

What’s up with Dragic though? Another poor night, this time 3-12, is he hurt or something? You almost never see him go through stretches like this for this long.

For CHA, Dwight almost had a quadruple double, but not the kind you want. His 9 TOs were a team high and as a group they finished with 22. Combine that with 5-20 shooting from deep, and it’s no surprise you lost a close one. 26 points off 22 TOs in a game you lost by 5 would keep me up at night. I guess MIA had 21 TOs so it sort of cancelled out, but still not a great idea for a team on the road.

For CHI, this is how you tank baby! Another game they lost by 1 point, again this is the ideal situation for Bulls fans. Play games that are entertaining and then at the end come up just short so that you don’t mess up your draft odds. Get some young guys experience and build the hype. Well, that’s what happened

and they still win convincingly. Now, playing MEM had a LOT to do with it, but even still. The Spurs second unit accounted for 52 of the 95 and Rudy Gay was a big reason why

but then also Manu did Manu things

Spurs are a machine, and they’re doing this all without Kawhi who is a top 5 player. Damn.

For MEM, it’s hard to remember a time when they were 7-4, because they’ve lost every game since. They’re now up to 10 losses in a row, and it is not going to get better anytime soon. Teams like CLE/MIN/TOR/OKC/WSH/BOS/GS are on their horizon.

Their play is so bad, this is the highlight you’re getting

Big time division win for OKC, and they got dangerously close to blowing a 21 point lead. This game was a one possession game late in the fourth, but OKC made enough plays down the stretch to prevent what would have been a BRUTAL loss at home. I suppose it helps when you get 36 from PG13, 15/9/14 from Westbrook, and an 11-11 night from Steven Adams

For MIN, a valiant comeback effort no question. Their Big 3 combined for 68 of the 107, KAT finished with 23/9, but he needed 23/10. How he didn’t hold on to that miss in the closing seconds which allowed Steven Adams to rip it away for a layup to put the game away was probably tough to handle for MIN fans. They did their job, they forced a tough shot and were in position to get possession to get one last shot, but it wasn’t meant to be. Also tough to lose when you end the game with 51/50% splits.

MIN defense is still a major problem, and probably what is holding them back from having a better record. Can’t be giving up 110+ points against a team that only averages 102.

The Jazz sure have something in Donovan Mitchell. He was unreal, finishing with 41 points on 13-25, including 6 made threes.

He and Tatum are probably neck and neck for 2nd place in the ROY race. Granted, he has a much different role, and the efficiency isn’t quite the same, but you can’t watch that highlight and not be blown away. You know who else has been really good recently for UTA? Alec Burks

For NO, we could talk about the highlights, talk about Boogie going for 23/13, or Rondo going back to vintage Rondo with 13/8/11, but I doubt NO fans care about that. The only thing I would care about if I were a Pelicans fan would be this

This fucking sucks if AD is going to be out for a considerable amount of time. Guy just can’t stay healthy it sucks.

And that’s it! You’re now all caught up with everything that happened last night in the NBA. We have 8 more games on tonight, but if you choose to watch college football that’s fine, just come back here tomorrow morning and I’ll fill you in on what went down.