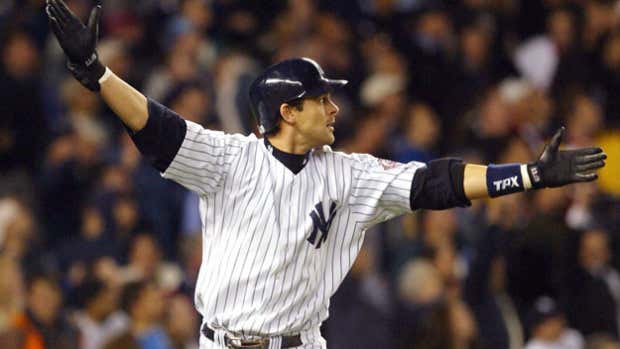 So, Aaron Boone is the new manager of the Yankees and it’s a mixed bag of emotions for fans. Some people are pissed because they wanted someone with more experience. Some are happy because Boone is a “baseball guy” from a baseball family, and he’s been preparing his whole life for this chance. Then there is a third group, who just trusts whatever Cashman does. That third group is the place to be, because if you doubted Cashman’s power, those thoughts should be thrown out the window with this hiring.

Don’t get me wrong, everything that Hubbs said last night is true. He has personality and is young so he can relate to young players. He hit a huge home run in the 2003 ALCS that will be shown forever so he feels like one of our own even though we didn’t win a World Series and he was only here 3 months. However, more importantly, he will do what Cashman says or he’ll find himself on the streets.

Over the past 2 years, Brian Cashman has rebuilt the future of the Yankees basically on his own. We went from huge contracts that George signed before he died to having one of the best systems in baseball and a game from the World Series in just about a year and a half. With results comes power and with that power, Cashman got rid of Girardi and hired his guy, in spite of what Hal said he was looking for in a manager.

At the General Manager meetings last month, Hal Steinbrenner was quoted saying “My concern about a candidate like that would just be the lack of managerial experience, but even more important, coaching experience of any kind,”. Everything in that statement made sense from an ownership standpoint but for Brian Cashman, not so much. Cash has already won World Series with 2 managers, but now that this is his team, he wants to win his way and to do that, he needs someone who will listen. A manager with years of coaching experience, like Meulens, has a plan that they’ve been building up for years and would view this as a chance to show off their talent. Aaron Boone on the other hand is lucky he didn’t get laid off on Thursday, so he’ll do what he’s told. Just like Hal did when Cashman said Boone was his guy and that the Steinbrenners didn’t need to interview him.

Many people are saying this is a big risk for the Yankees, but it really isn’t. In a world where experienced managers are making less than a million dollars, Aaron Boone is going to be making peanuts for this opportunity. With that, if he doesn’t work out after a year or two, the Yankees can just cut their losses and bring in someone with more experience or just replace Boone again with Arod. The Yankees window to win opened prematurely so even if this is a terrible idea, we still have a ton of money to spend next year and no big commitment to Boone.

On the other hand, if this works Brian Cashman is a genius. Cashman has shown that he can go out and spend to win, but this would show how much he can adapt to the changing game. After years of dealing with the New York media, and player egos, there was a part of Cashman’s mind that said “I’ll just do it myself” and this is as close as he could get. Thanks to sabermetrics, managers just aren’t that important anymore. There are very few gut decisions in the game anymore so Cashman got a guy that will follow the game plan because he could’ve hired anyone and we’ll still win a couple World Series over the next decade.

All Boone has to do is keep it light around the clubhouse, listen to everything Cashman says, and play nice with the press and he will be the 24th manager to win multiple World Series within the next 4 years. From there he will always have a job in the game, and make real manager money. Quite the change from splitting an Uber with Jessica Mendoza to the ballpark.

It’s Cashman’s world and we’re just living in it.

PS: This is a spot on impression but was missing the cup adjustment.