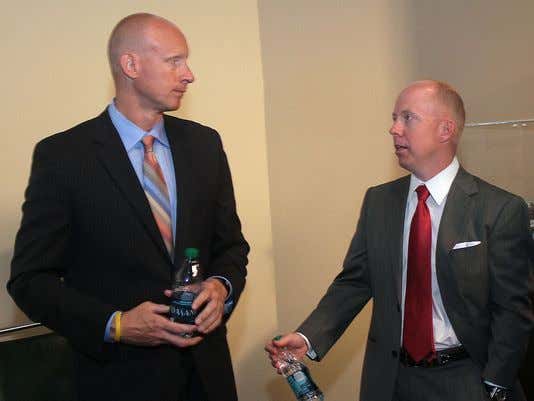 Yeah, I know it’s conference championship Saturday in college football, but it’s basketball season as far as my dumb brain knows it. This is actually a pretty solid slate for the first Saturday without a million football games headlined by the Crosstown Shootout. We’ll get right into it since there about 8 games worth mentioning today. My plan is to keep this a little shorter on some of the games and really go more in depth on the best game of the day (X/UC).

So this is easily the game of the day when you look at everything involved here. In case you missed it I talked to former players and media members in the city about this rivalry earlier in the week and what makes it so unique, so we won’t delve into that here. Both of these teams are Final Four capable teams and this is the first time I can remember these teams playing with those type of expectations at the same time. A couple quick points here that I think are worth mentioning:

– This is Cincinnati’s first road game and first game against an opponent worth anything. UC is a good team, but it’s been hard to truly judge them when the games have come against Savannah State, Western Carolina, Alabama State, Coppin State, etc. They’ve played one team currently ranked in the top-100 in KenPom (that was Wyoming at No. 91). On the flipside this is the third consecutive game Xavier is playing against a NCAA Tournament team – Arizona State, Baylor and now UC.

– The fact that this game is at Xavier holds a ton of weight for me here. These two teams are very comparable in the sense of having similar talent. Trevon Bluiett is the best player on either team, but looking at the rosters side by side you can make a case for either side on talent alone. Look, there’s no way about this, this is a heated, heated rivalry. Cintas Center will be packed, loud and just a crazy environment for this game.

– Cincinnati has an advantage, the question is how much can they exploit it? That advantage comes in Gary Clark, who should provide a mismatch against Xavier defenders. He’ll be paired up against Kaiser Gates to start the game and while Gates is solid on the offensive side of the ball you can find a way to exploit him defensively. Clark is Cincinnati’s 2nd or 3rd best player, depending what you think of Cumberland, so look for Cronin to try and get him the ball early. The one thing is Xavier has plenty of bodies to throw out there to give Clark a different look, not saying that’s the best plan, just something that we could see.

– I want to see how Cane Broome/Justin Jenifer handle the environment and Xavier’s defense. If they play well, Cincinnati has a good chance to win this game. If they struggle, I don’t see how Cincinnati wins, even with a big game from Clark/Evans/Cumberland. They are two different players. Broome wants to play fast and can really create his own look. The problem is he’s really turnover prone. He has a turnover rate of 27.5% compared to Jenifer’s 9.3%. If you turn the ball over against Xavier, it’s easy points, especially at home.

– For Xavier, they don’t want to beat you from behind the arc, but this is a game where they can really have an advantage. Cincinnati gives up a lot of 3s per game, but defend them pretty well, letting teams shoot just below average at 32% per game. Cincinnati will dare Goodin to beat them from outside, but if he can draw enough attention getting past Broome/Jenifer and kick to Gates/Bluiett/Macura and they make shots early it will completely disrupt the Cincinnati defense.

Pick: I’m going to take Xavier here simply because they are playing at home. This is the biggest thing in this game right now. I think you see Xavier keep Cincinnati off the offensive glass and push the tempo from there. I expect Bluiett to have another big game in the Shootout while I think Clark really goes off for Cincinnati. This is going to be a great one.

It’s sort of crazy to think that if Wichita beats Baylor here it will be the best regular season win for the program since Fred VanVleet and Ron Baker were on the roster. They have a great chance here with Baylor now missing Terry Maston after suffering a broken hand during the Xavier game. The other thing here is Wichita State has the shooters to beat Baylor’s zone. They don’t necessarily need to attack Lual-Acuil at the rim. From a defensive standpoint they have the length to really bother Manu Lecomte. I think Wichita will be able to hide Frankamp defensively in this game and let Reaves/Shamet/Brown chase Lecomte around and really make Baylor’s offense stagnant. I like Wichita here.

A rematch from last year’s NCAA Tournament where USC a No. 11 seed upset SMU in the first round. The biggest question I have here is does USC finally let De’Anthony Melton play? Melton has been sitting this year due to eligibility questions stemming from the FBI investigation. However’ that all change this week when video evidence came out supporting that Melton’s family never received money like it was stated originally. The video evidence shows the envelope of money was only given to Christian Dawkins. There’s 0 reason for Melton to be sitting in this game. If he plays I like USC a lot here in the future as a Final Four team. He’s the one guy on this team who can impact the game without the ball in his hands and that’s what this team is lacking right now. He can get others involved, he’s a great defender and just adds depth to this roster too. SMU is coming off a win against Arizona but also suffered loses to UNI and Western Kentucky down in Atlantis. They are a team that wants to spread you out with shooters, leave one guy in the post and attack you that way. I’ve been high on USC since the preseason and I’m going to stick my guns here and take them as a road team.

Another great rivalry game here as expectations were high for these teams preseason but have tempered due to injuries/other things – leading to EC Matthews and Emmitt Holt both missing from this game. Rhode Island does an excellent job taking away the 3-point line from teams, forcing them to attack the paint and run into help defense. The one problem here is URI also fouls a ton. Combined with Providence being excellent at drawing fouls, that’s not the best combo for this game. Expect a lot of whistles and a lot of trips to the line for the Friars. Without Matthews playing, URI needs Jared Terrell to continue to be the go-to guy offensively. He’s scored in double digits every game this season except the season opener and was unreal against Seton Hall including hitting the game winner. Providence will likely extend out and force the ball away from him, but Terrell has been able to get into the lane. URI can also take advantage on the offensive glass. The Rams aren’t necessarily a great offensive rebounding team, but Providence is a terrible defensive rebounding team. A guy like Andre Berry could have a big game if he’s able to grab a few offensive rebounds. For Providence it’s all about running the flex offense and Ky Cartwright. He’s one of the best passing point guards in the country and his ability to create offense off the bounce and find the open man will be key here. I like Providence getting the points here.

This is a really intriguing game for me. Late night, in Vegas with UNLV being good again. Arizona will travel well for this game, but Vegas does a great job backing UNLV when the Rebels are good. This year they have a NCAA Tournament team led by Brandon McCoy who will be going up against a guy he’s familiar with in DeAndre Ayton – both played on Cal Supreme together. Arizona is an absolute mess defensively right now, which is a weird thing to say about a Sean Miller coached team. The problem is – as pointed out by Rob Dauster over at NBC Sports – Arizona keeps running Ristic and Ayton out there together and that’s not their best defensive lineup against teams that spread them out. Think similar to what happened at Texas last year with Allen playing the four instead of the five. Against UNLV they don’t have to worry about that. The Rebels will play through McCoy and Juiston, both of whom are traditional post players. What I do think you see here is two things. The first being a locked in defensive Arizona team – this is a game that Miller probably has drilled into them since Atlantis about going to win. The second is a huge game from Allonzo Trier. I don’t trust UNLV’s wings to prevent him from getting to the paint and it just feels like a game where he drops 30 on 12-for-18 shooting or something like that. I think you see Arizona start to figure it out, starting with this game.

So some pretty serious news broke Friday afternoon when Geno Thorpe, a grad transfer for Syracuse, announced he was leaving the team for personal reasons. Now he only played 4 minutes against Maryland but was Syracuse’s fourth leading scorer at 6ppg. For Kansas, they are doing Kansas things shooting the ball. The Jayhawks have turned into one of the best shooting programs over the last three years and that’s staying true this year. They currently rank 8th in the country in 3-point shooting at 45.2%. That’s an important thing against Syracuse’s zone. The Orange extend their zone so far that you can really attack it by getting the ball to the middle then kicking. That’s where a team like Kansas can really hurt Syracuse. Maryland tried to start the game by putting Kevin Huerter in the middle as the team’s best passer but they couldn’t get the ball to him. Kansas should be able to surround Azibuike with four shooters and look to attack by swinging, ball in middle, kick or keeping the middle open and looking to attack off the bounce to collapse the top of the zone and kick to the top of the key. Syracuse has gotten off to a better start this season and has that win over Maryland, but Kansas is a top-4 team in the country. I like the Jayhawks here.

Other games worth noting: Vermont at Bucknell, Villanova at St. Joe’s, Penn State at Iowa, Arkansas at Houston, Virginia Tech at Ole Miss, Indiana at Michigan and Georgia at Marquette.