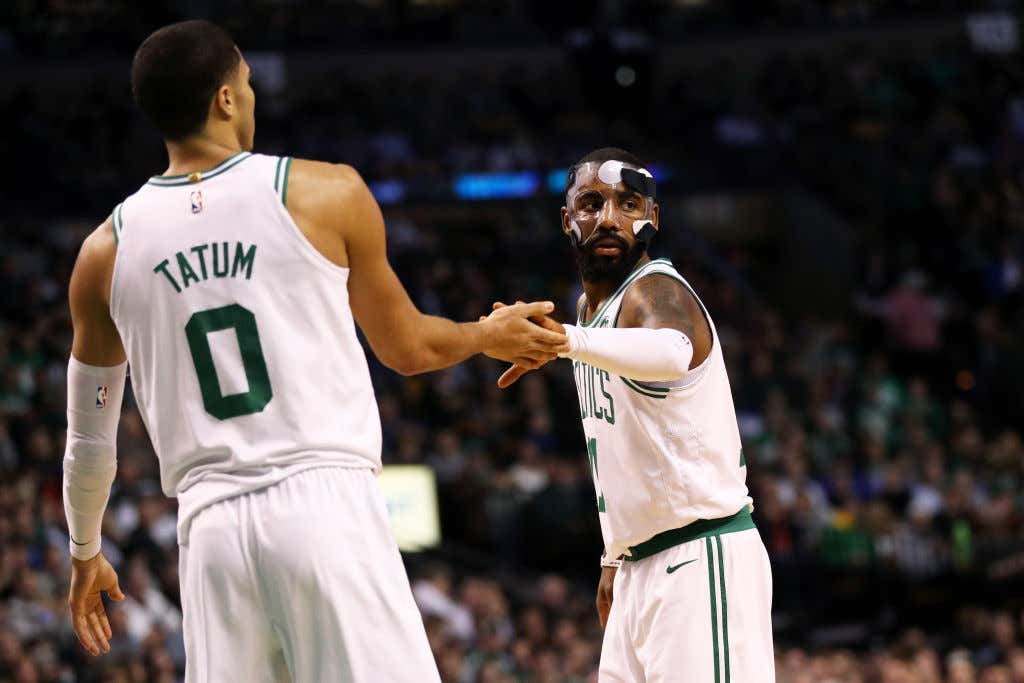 Yes we know, the Sixers did not have Joel Embiid. That’s what I heard most from Sixers fans after they once again, failed to beat the Boston Celtics. See Philly fans are funny, because when you remind them that Al Horford completely dominated Joel Embiid earlier in the season, you get the “Yeah well he wasn’t in shape so it doesn’t count” routine. I love this because while I agree, there’s no chance he was in shape, how do you explain this?

Yes, he wasn’t in shape, but then immediately after seeing Horford, he went on to dominate. Guy got magically in shape huh?!?

Here’s what Sixers fans need to understand now that they have a decent team with extremely promising young talent. You can’t have it both ways. You can’t puff your chest out with every win talking about how you guys are suddenly the most attractive destination in the NBA, and then when you get your dick stomped on by a better team, start with the excuses. I get it, you want to be where the Celtics currently are, who wouldn’t? But guess what, even with Joel Embiid, you’re not better than THIS Celtics team, and that’s a team without Gordon Hayward. Take your medicine and pipe down. And I know, this year is about just making the playoffs and maybe winning a round, as a Celtics fan we just were at that point in our rebuild not too long ago. Just learn to walk before you run, and realize you still have a ways to go.

Now enough about the Philly, let’s talk about what we saw from the good guys

I think it’s safe to say Kyrie feels comfortable in this offensive system no? The efficiency is starting to come around, he’s at 50% for the month of November and 48% for the season which is pretty ridiculous, and the last thing that still needs to come around is his consistent three point shooting. With a player like Kyrie you kind of throw the percentages out the window, because at any time he can have a night like last night where he goes 5-8 from deep. His ability to knock down those shots on the little dribble handoffs certainly was impressive, and now that we’re 20+ games in, I think it’s really interesting when you compare how the Celtics are using him to what CLE did.

For example, their usage rates are almost identical. 30.8% last year, 30.7% this year. Here’s what I love. His assist% is up nearly 3% at 32.4, while his TOV% is down to 9.9, while his TS%, 3PA rate, and FT rate are all higher than last year. This tells me a few things. First, despite playing nearly 4 minutes fewer than last year, he’s being used around the same amount, and he’s making the most of that usage. He’s being more aggressive offensively last year, while also doing a better job of taking care of the ball and a better job of getting those involved. It’s really hard not to love that.

I didn’t even talk about his defense yet either! His rating is down to 101 on the year, which is by far the lowest of his career. So I’m sorry to say Kyrie, but that mask is staying until further notice.

– Ben Simmons vs Jayson Tatum is going to be really really fun for the next decade. Given his workload and his stats, Simmons is obviously the clear favorite for ROY, but don’t tell that to Jayson Tatum. Our rookie went toe to toe, and in fact, simply played better.

15 points on 6-11 shooting including 2-3 from deep, him and Kyrie were the closers in the fourth last night, where Tatum had 9 points on 4-6, including two murders. I can only imagine what Amir Johnson was saying to himself when he realized he was on an island 26ft away from the basket.

Remember when people said Tatum wouldn’t be able to sustain his incredibly hot start from behind the arc? Well, then explain how he’s taking more threes in November than he did in October, and his 3P% is a measly 48%. He has just 3 games this month in which he didn’t make a three, and one of those games he played 9 minutes before tweaking an ankle. He’s made multiple threes in 4 of his last 5 games. So much for not being able to shoot threes at the NBA level. Ainge wins again.

– With no Embiid in the lineup, I’m glad the Celtics made a legit effort to make sure Al Horford got his. Second on the team in FGA with 12, he made 9 of them and finished with 21/8/5 and was a starter high +10

Guys like Amir/Saric are not skilled enough to stay with him, and I thought Al did a great job of mixing up his inside/outside game. Six of his nine makes came from 15ft or closer, and he made his open threes which kept PHI honest. It looks like Al has figured out whatever was bothering him offensively during the ATL/DAL/MIA/ORL stretch, because he’s been MUCH better over the last three.

– I love Marcus Smart the point guard. Not Marcus Smart the shooter, but Marcus The Creator. Did you see how he ran the offense? The patience to let plays develop and find Horford for nice alley oops, and then to find cutters like Marcus Morris is why I can’t ever quit Smart. He’s just too good a passer, and does too many other things to stay mad, despite nights where he will shoot like an asshole.

Smart led the team with 8 assists, and his 6 TOs were a bit much for my liking, but he was also a team high +15 so I think we’ve all learned by now his play makes little to no sense.

– Speaking of Marcus’, I know he doesn’t like it, but I’m starting to really enjoy Morris as a second unit scorer. He had 17 on 6-11, and it was a nice variety of his patented midrange game, with aggressive takes to the rim

Morris also brought it on the defensive end, which is probably what I care most about. His 89.9 Drtg was the lowest of any player who played over 20 minutes, and he had the second highest overall net rating of anyone who played last night. His 13/5 on the season with 43/37% splits is about what you can expect from him, and as long as the second unit still has scoring issues, I think this is where he best helps the team.

– After the rough defensive effort against DET, it was nice to see another team be held under 100. Now this probably changes if Embiid plays, but if that’s the case the Sixers probably don’t make 16 threes either.

– The Sixers are the best rebounding team in the NBA, so the fact that the Celts kept it relatively close (45-40) was big.

– How could anyone watch Daniel Theis and have the thought that they would rather see Okafor get these minutes? I’m almost ready to say Theis should be the starting big next to Horford given how he can rebound AND stretch the floor. He played just under 14 minutes, made 2 of his 3 shots, and grabbed 8 rebounds and had three blocks. THAT is what I want from my reserve bigs. I don’t care about points, I want solid defense and elite rebounding.

Did you know Theis has a defensive rebound% of 24.2%? That’s very close to Anthony Davis territory not to brag.

– Jaylen started strong with a nice little dunk, but sadly that would be his only points for the night. A less than stellar 1-6 in just 21 minutes, something wasn’t working for him last night, and Brad didn’t really fuck around. He was a DNP-CD in the fourth quarter. I’m not sure if he tweaked something, or Brad noticed there was something mentally that he didn’t like, but this wasn’t one of Jaylen’s most impressive performances.

– Second chance points usually aren’t a problem for this team. That’s how they are able to keep teams under 100 and have really excelled on defense. Well, they got slaughtered here, with PHI having a 17-5 advantage.

– Nothing gets me more fired up than when the Celtics start the game with sloppy play. I guess we need to add dribble handoffs with Al’s left hand as something that is just going to be hard. Back to back turnovers with that exact play in the first quarter was annoying, and 16 total TOs for the game is too many.

– Poor Baynes. Just 1 FGA in his 13 minutes, I know it doesn’t make sense, but I’m surprised they didn’t throw him a couple bones on the offensive end. He’s so much bigger than any PHI big, he could have just dunked on someone. I guess he really is our 7ft goon who is there to rebound and block shots (which he did)

– Verrrrry unusual for the Celtics to come out of halftime and lay an egg in the third quarter, but they did. it was by far their worst quarter on both ends, and fortunately it didn’t come back to bite them. Usually when they have any sort of lead, they step on throats in that third to make things not as tense. Silly me for thinking a Celtics game could not be tense no matter who they play.

– I wish the Celtics had JJ Redick. I want that shooting on this team so fucking badly.

– How are you going to watch this

and not give Yabu some burn? Come on, it was the Sixers!

– Do you think Jayson Tatum can make a layup with his left hand? Should we be worried that he would rather take a low percentage impossible angle layup with his right, than just use the proper hand? I don’t know why this is a thing, but I’m starting to notice it more and more. Just use your left hand young fella.

– Why is it that now when Jerryd Bayless plays the Celtics he turns in a performance that I wish he made while he was a member of the Celtics? Typical UofA jerk.

Sadly, the Celtics don’t play the Sixers again until January, so it’s time to set our sites on the horizon. Most notably, MIL/DET/SA. There’s a couple cupcakes like PHX/DAL sprinkled in, but those two on the road against the Pistons and the Spurs will be big measuring stick games. Can this team punch back against DET? Will they sweep SA (prob no Kawhi)? Either way, next up is a little afternoon date with the Suns tomorrow, so in the meantime just say it with me