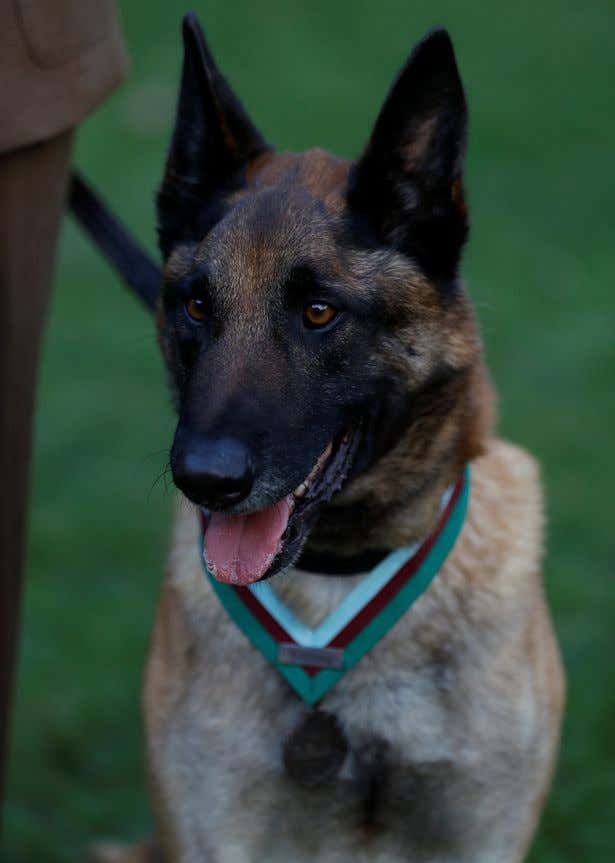 The dogs, named Kevin and Dazz, have reportedly been retired for several years after identifying IEDs during several tours, The Sun reports.

It has been reported that the dogs, both nine, will be destroyed next week because they can’t be rehomed safely.

But furious staff have now written to the commanding officer at the Defence Animal Centre in Melton Mowbray, Leics, in protest.
An Army spokesman reportedly said: “Wherever possible we endeavour to rehome military working dogs.

“Sadly there are occasions where this is not possible.”

But a dog handler was said to have claimed: “This is such a cruel way to treat these animals that have given us so much.

“People who worked closely with these dogs are devastated at the plans — they’ve begged to save them all.

This story has been making the rounds this morning. Celebrities are talking about and trying to save the dogs. I think that’s great. I wanted to put a little background information out there.

Before I started working at Barstool, I was a dog handler and kennel master for the Marine Corps. Occasionally as a kennel master or an Army veterinarian, you have to make a decision that the Military Working dogs are no longer fit for duty. The dogs can become too old, too exposed to violence where they can have nearly a mental breakdown, or they can just lose the desire to work. In those cases, the kennel master and vet start an adoption package. Usually, about 90 percent of the time, the dog can live his or her life out with one of their former handlers.

The retirement package goes pretty smoothly and it takes just a couple of weeks/months to get a replacement at the kennels. The retirement package that allows the dog to become a civilian has many steps. The article listed above does not talk about that. It just says that the Army didnt allow the adoption to take place for safety reasons.

In the retirement process, the kennel master and chief trainer observe the dog. They have people walk by with equipment and assess the dog’s demeanor. The dog is given several chances to prove that he or she wont attack or isnt a likely threat to attack someone. Remember, lots of these dogs arent just bomb/drug dogs. They attack and are trained to attack with or without command. The dog is taught to assess a threat without the command of a handler and attack if it feels a threat is imminent. It’s really beneficial in forward deployed areas but can be extremely dangerous to people when you are taking the dog on a walk at a local park.

The dogs are, by and large, not adopted at young ages. The military uses them until they damn near cant be used anymore. The dogs are often old and extremely set in their ways. It’s hard to train out YEARS of aggression training in a few weeks or months. Additionally, most of the dogs have extensive medical needs that will no longer be covered by department of defense funding. The Army vets are low on personnel and their attention is kept by the dogs who are still on active duty. They simply dont have time to care for a bunch of retired dogs as well.

I hate seeing dogs get put down. It sucks. My very first dog that I handled, Orlando, was put down instead of adopted. Orlando was a fantastic dog. He could find drugs with the best of them. He was great at locating people. He was great at his attack work. He absolutely was unfit to be a pet. He was 11 years old with a bad attitude and even worse hips. The military tries to do everything they can do adopt these dogs out. Sometimes, it’s best that they dont. It stinks, but that’s the truth. I dont know if that’s what happened here. The Army wouldn’t be accepting this blowback if they didnt think they had safety in mind.