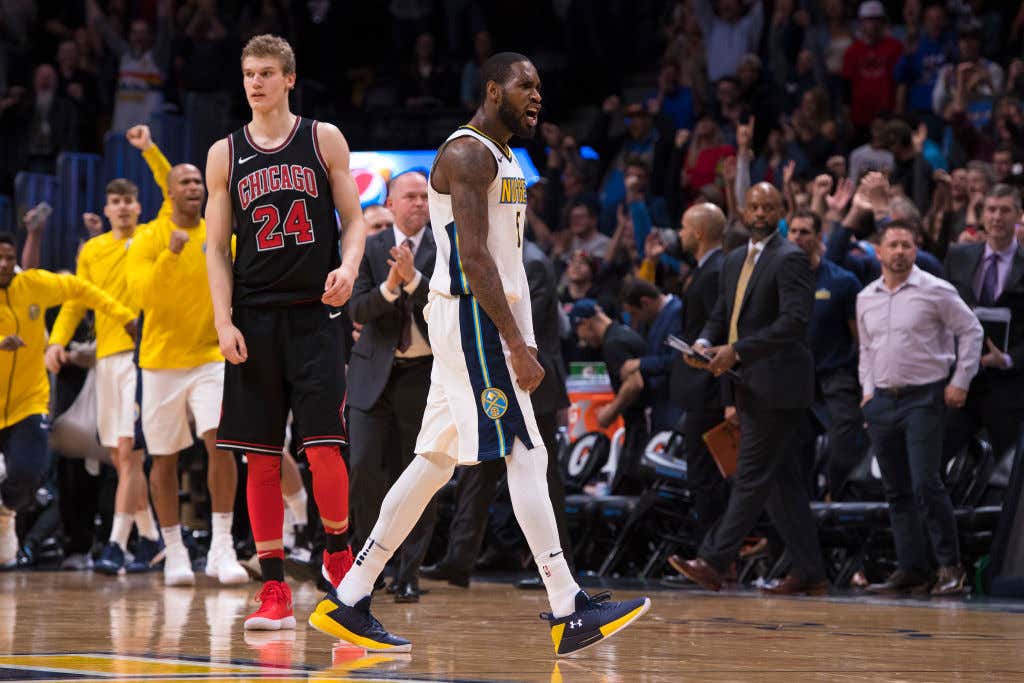 Welcome to another edition of Last Night In The NBA where we catch you up on everything that happened the night before from the Association. There were just fives games last night, but maybe you were watching football instead and didn’t catch the fun. That’s fine, stupid, but fine, because here’s what happened.

This now makes 10 in a row for CLE. Sure they’ve played primarily the worst teams in the league over this stretch, but a 10 game win streak is a 10 game win streak and those don’t happen very often, so credit to Lebron. Is it a concern that they still gave up 114 points to the Hawks, perhaps, but at this point who expects the Cavs defense to be good? When you get 24/6/12 on 6-11 from Lebron

with 19 points from Wade including 3 made threes

defense doesn’t really matter. Oh and Jae Crowder bless his heart finally had a decent outing, finishing with 15 points on 6-10 shooting. So how long can this streak go? Well looking at the Cavs schedule, it goes like this: MEM/CHI/SAC/IND/PHI/ATL/LA/UTA/WSH/MIL/CHI/GS/SAC/UTA. That’s not too hard. Maybe IND or MIL? Def GS right? Cavs could easily have a 16-17 game win streak given what’s ahead of them.

For ATL, they followed their typical formula. Dennis Schroder leads the way with 20+ or something, they shoot pretty well from the field, but turn it over a ton and one quarter usually does them in. That’s basically how last night went.

The Hawks also got Ilyasova back from injury, who had 22 off the bench

Them: “The Celtics should start to worry about the Sixers”

Our closest game of the night provided us with quite an ending! I don’t know how you can let Will Barton get all the way to the rim like that in the closing seconds, but for some reason Justin Holiday decided that defense could be optional that possession. That’s a guy who knows how to tank if you ask me. Thankfully for Bulls fans, Will Barton was simply ridiculous.

37 points on 13-19 shooting including 6-9 from deep, and the game winner. That’s how you salvage what would have been a brutal home loss, and another night in which Jokic and Murray were essentially non factors.

For CHI, if I’m you I’m happy they didn’t do something stupid like win this game, and they still got some great showings from their young guys. Baby Dirk was legit with 20/9 in 32 minutes

If we really want to be honest, we have to talk about how Robin Lopez was too much for Jokic to handle. He had 20/6 on 9-11 shooting as well, and completely bottled Jokic up on the other end. The Bulls shooting 53% and turning it over just 11 times is encouraging, and that’s all this season should be about. Never win, but see just enough to keep you excited for the future. Mission accomplished in my opinion.

It’s crazy what a difference Eric Bledsoe has made for this team on both ends of the floor. They’re better offensively with another playmaker next to Giannis, and defensively, forget about it, they are an entirely different group. It certainly helps to beat a team like POR, who is no slouch defensively, when your three best players combine for 71 of the 103. Bledsoe had 25, Middleton had 26, and Giannis 20

The Bucks need to win games like this, and then their next game against SAC to build up all the momentum they can, cuz their next two after that are BOS and DET. Head to head matchups are going to be reaaaaaally important in a few months.

For POR, Aminu finally came back so that’s huge for them moving forward, but outside of Dame/CJ/Nurkic (none of which shot the ball all that well), nobody else really showed up, which is surprising considering they were at home

Poor LAC just can’t catch a break. We know they stink now because their entire team got injured, they had won 3 in a row beating dogshit teams like DAL/LAL/SAC, but last night once they played decent competition, it was back to giving up a billion points and losing. A big reason why is because Donovan Mitchell did some things

Those dunks are no joke. He finished with 24 points including 5 made threes, in a team high 36 minutes. As a team UTA was pretty lights out which seems like an oxymoron thing to say, but it’s true! They shot 57/48% for the game, and had 7 players in double figures.

Alec Burks even came out of nowhere off then bench and had 28. He hadn’t broken 20 points all year

For LAC, Austin Rivers had himself an interesting night. ON the court he was probably the Clippers best player with 25/6

But he also couldn’t help himself from ignoring what I’m sure was some quality chirping. What could someone from UTA honestly say to get you so worked up?

It’s not the fans fault the Clippers turned it over 19 times and gave up 3 straight quarters of 30+ points.

And that’s it! You’re now all caught up on everything that happened last night in the NBA. We have 8 games on tonight including DET/WSH, IND/TOR, and MIN/OKC but go live your life on a Friday night and come back here tomorrow and I’ll let you know what you missed.