So MTV has this Pros vs. Joes type of show going on right now where people from The Challenge compete against stars like TO, Shawn Johnson, and Lil’ Romeo. I’ve been a diehard Challenge fan all of my life but I decided to sit this season out. But it looks like I missed quite an episode last night. CT not only put Terrell Owens in his back pocket, but he basically compared TO’s money managing ability to hitting the Bankrupt spot on Wheel of Fortune while also turning TO into a meme instantly. 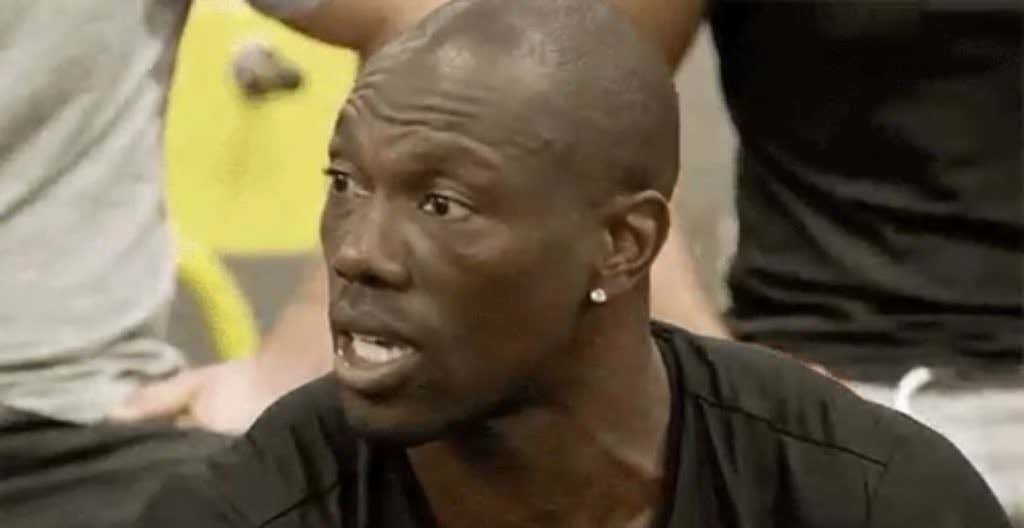 Just looking at that face brings tears to my eyes. Not sad tears either, which reminds me of my old favorite TO Face: The Giants Just Sent My Ass Home From The Playoffs Face.

Dude is even blocking people on Instagram over the show. 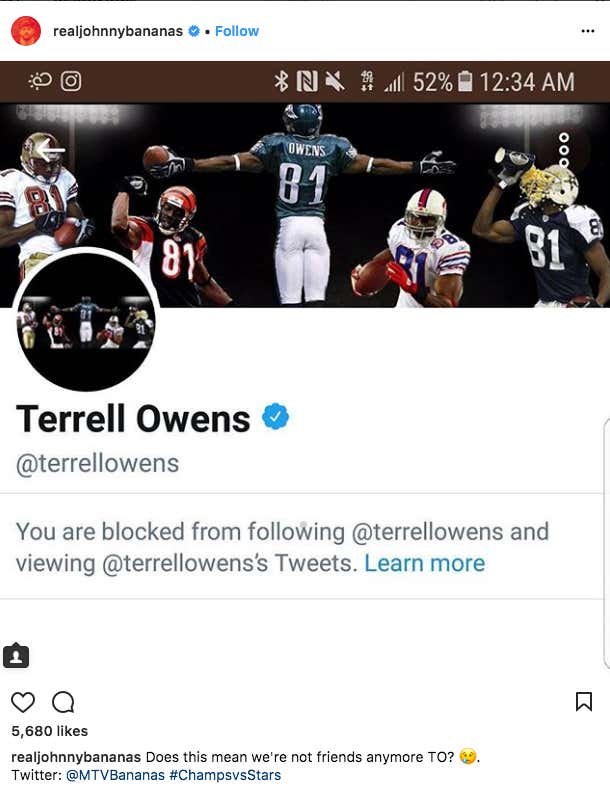 I know some people don’t like reality TV, or The Challenge, or TO. But if you can’t appreciate that reaction, you are a sopping wet blanket. TO was one of the most outspoken players in the NFL during his entire career. This show just started and TO is already getting put into bodybags by the crazy motherfuckers on The Challenge. TO occasionally got some mud on him in the NFL, but that was TO’s “Welcome to the mud” moment on reality TV which has muchhhhh thicker, dirtier mud. Going at Donovan McNabb through the media and stunting on the Cowboys star is one thing. But getting thrown into the Thunderdome with a bunch of people that make a living by drinking, fighting, and fucking on camera is quite another.

You can tell TO didn’t know what he was getting into just by the way he kept pushing CT. That’s no ordinary man. That’s C motherfucking T. First ballot Reality TV Hall of Famer and in my opinion the GOAT of all of reality television. The man who once screamed how he wanted to smash Adam’s head and eat it.

Ranted at Wes for hours on end until the sun rose.

And turned Johnny Bananas into a motherfucking backpack.

There are no lines that can’t be crossed once you go into that house of crazy people. Anything can and will be used against you in order to get your ass out of the game. In fact if anything, CT is a million times chiller than he used to be. Dad CT doesn’t rely on his physical gifts anymore. He just sits back and plays the mental game, which comes in handy when your opponent is a chiseled former NFL player. If this was the NFL, TO could have just speared CT and probably ended up with a 15 yard penalty. If he does that in a Challenge house, he is gone from the show. That entire sequence played out like the blitzes the Dolphins threw at Tom Brady on Sunday as he racked up another 4 touchdowns. CT just picking TO apart and putting on a clinic for the phrase mind over matter. CT’s not getting older, he’s getting wiser.