I have to admit that I had noooooo clue this was going on today. Probably because 99% of Americans don’t give a shit about the Georgia Dome. It was always just kinda…there. But I am always down for a stadium demolition. There’s something primal about watching a stadium get wiped off the map in like 10 seconds, followed by the requisite car alarms and the thought of “Wow, that’s pretty fucking close to the new stadium, they should have covered it in plastic or something”.

But nonetheless, that was a great way to start the short holiday work week. Well unless you live remotely close to the Georgia Dome and were hoping to sleep in today since the Falcons play tonight. Then it sucked. And since I don’t know what the best moments in Georgia Dome history are, here are my Top 3 Atlanta sports moments that didn’t occur at the Georgia Dome.

2. Dan Reeves doing the Dirty Bird after the Falcons beat the Vikings in the 1998 NFC Championship Game (I couldn’t find a video or gif of this, which means this is the internet’s biggest L since the Devnest murdered countless Barstool classics). 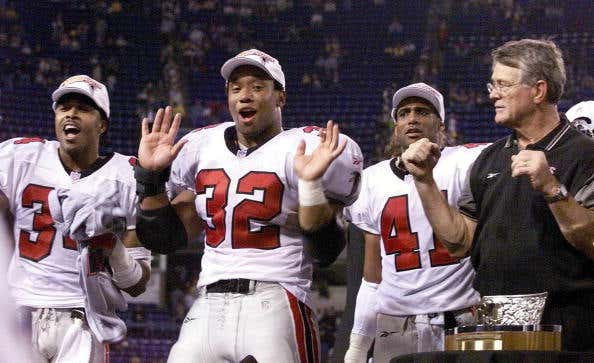 1. Ludacris having sex at the 50 yard line while the Falcons kick a field goal. I don’t THINK this ever happened. Pretty sure it was just a fantasy. But you still have to respect just how specific and outrageous that fantasy was. Sex right in the middle of a sold out stadium not after a touchdown, but as Morten Andersen readies himself to put 3 on the board after another Chris Chandler drive stalled out.

And as promised, here’s the live reaction to the Georgia Dome imploding.

Of course as soon as I stopped the Periscope, Siena let out the best THAT WAS AWESOME I have ever heard in my life. She just turned three and apparently already knows what the Barstool Difference is all about.

Again, since it’s the Monday of a holiday week, we all deserve more stadium implosions. So here is a random Top 10 Best U.S. Stadium Implosions video I found while surfing the ‘net*