The world’s previous most expensive work, “Interchange” by de Kooning, sold for $300 million in 2015. The buyer, billionaire hedge fund founder Ken Griffin, purchased a work by Jackson Pollock for $200 million on the same day as “Interchange.”

It was not immediately clear who the buyer of “Salvator Mundi” — which is Latin for “Savior of the World” — is.

Billed by Christie’s as “The Last da Vinci,” the painting was rediscovered in 2005 in Louisiana after spending centuries in obscurity. New York art collector Robert Simon purchased it in Louisiana for $10,000, thinking it a copy, and a six-year restoration process followed. During the restoration, experts discovered it was an authentic work by da Vinci.

If the illuminati exists, it was on the other end of the phones in that room. Four-hundred-fifty million dollars is an unfathomable amount of money to spend on anything, let alone a picture of a guy holding a ball mid-transition. 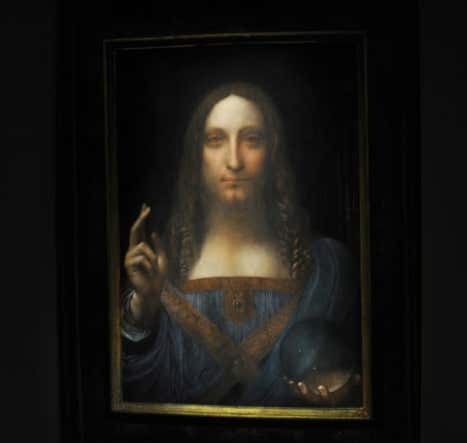 I can’t tell if he’s F to M or M to F but it doesn’t matter. The point is that there are people out there who have the ability to do this and it’s terrifying. I’m sure whoever released the video is already dead. Francois’s client probably had an asset on standby just incase anyone uttered his name. Take it from a hundredaire, when you’re a billionaire, privacy is of the utmost importance.

Having said that, Robert Simon is hands down the luckiest man in the world. He had a 45,000% return on investment in just over ten years and he did it by accident. Imagine the regret if he decide to pass? “Eh ten-thousand? That seems steep. Can you do forty-dollars?” I don’t know where the painting’s going or who bought it but I hope they keep it somewhere safe.