HuffPo- Houston police released surveillance video of a robbery at a doughnut shop in the city as they hunt for a trio who, in addition to stealing money, handed out sweets to some of the victims in the process.

The video shows three masked individuals entering the shop on Oct. 16 in the afternoon. One, brandishing a handgun, steals money from the cash register while another takes two customers’ cell phones. The phone bandit gesticulates toward the customers and seems to be talking to them — possibly even taking an order.

The person then peruses the sweets behind the counter, chooses two treats, and offers them to the customers sitting by the window.

These guys really put the “hood” in Robin Hood. And I’m talking about the fact that they’re all wearing hoods. Sure, they’re also hoodlums–which I think is an alumnus of the hood. But in no way am I inferring that these guys are from the “hood” in the colloquial, rapper sense. Who can say? They might be rural farmers.

I will say, this guy thinks he’s a rapper: 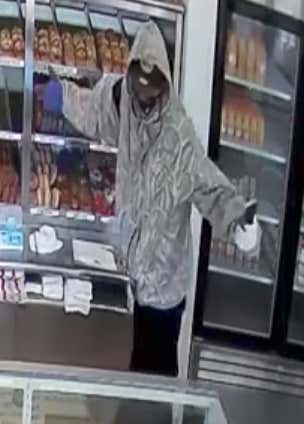 So demonstrative. He MUST be rapping about donuts: “I’m the donut thief, don’t start beef, I’ll fill your girl with jelly and listen to her queef.” (There’s a reason he’s rapping in a donut store mid-heist as opposed to on stage at 106 & Park. His lyrics are way too aggressive).

Still, he definitely asked the customers what donuts they wanted. And you know what’s incredible? He used the tissue paper so as not to get cruller glaze on his gardening gloves. This is not his first time handing out free samples during a robbery. You don’t leave a trail of glaze for the cops and ants to follow. 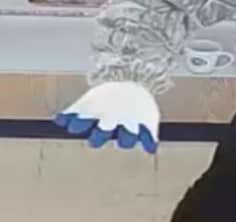 That’s either a gardening glove or an oven mitt.

Anyway–it’s a brilliant move because those customers will keep their mouths shut. Those are the key witnesses and they’ll be up on the stand, covered in donut crumbs, claiming they have no recollection of the robbery whatsoever. Nobody snitches on someone that hands them a free donut. Or while their belly/mouth is full of donut.

These guys are the kind of bad guys you’d root for in a movie because they hand out donuts. A lot of people loved Pablo Escobar and Al Capone because they were generous and charitable. Does accepting their handout make you an accessory to the crime? I say no. You take that shit and say thank you, or else you’ll be oozing brain fluid like a jelly-filled.

And Seinfeld on donuts: