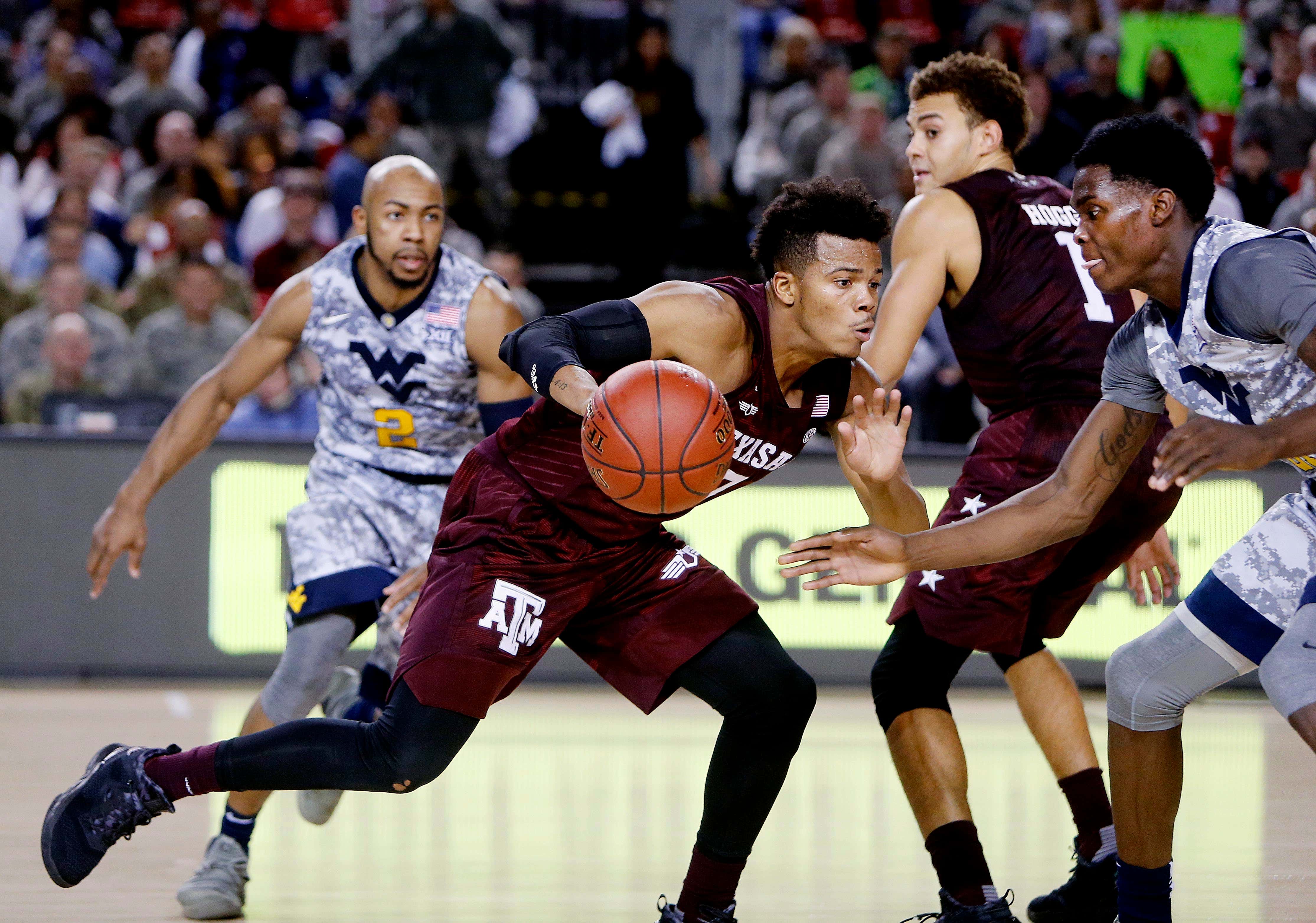 So this is something I plan on continuing to do, which is a thoughts and reactions blog the night of/day after games. There are a million college basketball games and it’s always easier to go to one place to get a couple quick thoughts on what happened. I usually like to pull video from Synergy for this, but for today we’re going to most likely skip that. The way I like to set these up are quick hitters, bullet points almost to talk about some of the games and keep everyone up to date.

There were a lot of blowouts, so we’ll touch on individual players and teams, but here’s a little recap of the biggest game of the day.

– This may have been the biggest shock of the night as Texas A&M was playing without Robert Williams and JJ Caldwell, who just happen to be their best player and their starting point guard. Teams who tend to not have a starting point guard struggle against West Virginia’s press. That looked like the case early as West Virginia really dominated the first 10 minutes or so of the game. They were forcing Texas A&M into turnovers and early shots, which West Virginia treats like turnovers.

– The problem continues to be West Virginia’s offense. It was weird, they started the game almost like a football team. Instead of running a 5-out motion that Huggins love he scripted a few 2-3 high set plays. This led to points as Jevon Carter is so good at reading his man and making the right cut, which either draws help leading to open threes or a layup for Carter. After that though, West Virginia went back to the traditional just put it on the floor and try to make a play. That doesn’t work. This is something that will have to be watched as the season goes on.

– Tyler Davis was an absolute beast for Texas A&M. The other big man finished with 23 (on 10-of-12 shooting) and 13 rebounds. Texas A&M really found a way to exploit West Virginia on the interior by getting Davis rolling in space and finding some easy buckets. The Aggies were balanced despite the suspensions, which was key. Admon Gilder and DJ Hogg provided 23 and 19 respectively off the bench.

– This was a statement win for Texas A&M and the SEC. I know it’s the first game and in the grand scheme of things this likely won’t matter, but Texas A&M now has a neutral court win over a top-15 team. In order for the SEC to make the jump that so many think it will as a conference, they need to win nonconference games like this.

– Tres Tinkle hit the shot of the night over at Oregon State. It’s good to see Tinkle back after missing last year due to injury. He’s one of the more underrated players in the country and he finished with 24 points, 6 rebounds and this absurd shot:

– The story from Missouri/Iowa State is that Michael Porter Jr., only played two minutes due to injury. He was seen icing his left hip and after the game Cuonzo Martin said he was pulled as a precautionary measure. That’s what makes Missouri’s win over a rebuilding Iowa State team even more impressive. The Tigers won 74-59 at home, with a ton of balance. Four players scored in double-digits, which means this team may be a little more dangerous when Porter returns.

– ESPN doing ESPN things. Grayson Allen did not transfer to UNC. Jock Landale is not French. Bonzie Colson did not change his last name. Other than that, they nailed it!

– Okay, listen up Indiana fans. This is not going to be a long term thing. Stop freaking out over the first game of the season. Yes, Indiana State kicked your ass. Yes, it was Archie Miller’s first game. The dude is a top-20 coach in America and you just need to wait until he gets his players into the program. Indiana will be back in a couple of years.

– We saw the new look Cincinnati offense early in the day against Savannah State. They were impressive getting up and down the court. Cane Broome adds a different dimension to the game that we haven’t seen from Cincinnati in quite some time. With that though comes turnovers, something to keep an eye on for the Bearcats. They – especially Broome and Jacob Evans – turned the ball over way too much against a weaker opponent. If they can take care of the ball, they are a a real threat in March.

– Speaking of Archie Miller’s former team, we have our first buzzer beater of the season. Dayton’s Josh Cunningham, one of the few returning players that saw some time last year, scored at the rim to give Dayton a 1 point win over Ball State.

– Kentucky absolutely struggled, especially in the first half against Utah Valley. I’m not necessarily surprised to see Kentucky struggle out of the gate, but to be losing at half is pretty ugly. This Kentucky team will take some time to find itself, simply because of youth and the makeup of the roster. It looks like the two ‘guys’ that Kentucky will turn to are Hami Diallo and Kevin Knox. But, this is a Calipari team and they tend to get better as the season goes on. Just don’t expect pretty offense.

– One more thing on Kentucky. The switch the 2-3 zone in the second half is something that you will see more of during the year. Calipari by nature is a defensive-minded coach. However, he hates zone. He loves to run a man-to-man where he can switch ball screens and protect the rim while being aggressive. This year’s team, with its length, has forced Calipari to think more about a zone.

– Luke Maye scored for the first time since he beat Kentucky. That’s a literal statement, but he also dropped 26 points and 10 rebounds over Northern Iowa. The 17-point win was pretty impressive as UNC was playing without Joel Berry and Cam Johnson. Jalek Felton got the start at point guard, while Seventh Woods pitched in with nine points.

– The UCLA/Georgia Tech game was not pretty out in Shanghai. The game started with it being Ben Lammers vs UCLA. Lammers had 12 of the first 18 for Georgia Tech as he ended with 24 points for the game. For UCLA, they relied on freshman Kris Wilkes and his 18 points.

– UCLA was very balanced, something that carried over from a year prior. Wilkes had 18. Welsh had 10. Holiday had 11. Hands had 14. That’s something we’ll see throughout the year. We’re not going to see the same sort of passing and highlight plays as last season, but Holiday and Hands are both capable of drive and kicks.

– Marvin Bagley was damn impressive in his debut for Duke. I’ll be honest I didn’t think Bagley would go out and get 25. Now, don’t get me wrong, he can absolutely score, but this was more in terms of makeup of the Duke roster. That starting five is so talented that Bagley doesn’t need to score 25 for them to be successful.

– What was encouraging to me out of the Duke game was how fluid Grayson Allen looked and how  he’s healthy. Last year he wasn’t healthy and obviously had some other issues going on. But, yesterday he went 6-for-9 (nice) from the 3-point line, looked more in the flow of the game and was able to play within himself. When he does that he’s not only successful, he tends to be efficient.

– If you want to talk about balance and depth, go look at Michigan State. They have a clear star in Miles Bridges, who recorded a double-double (20/10) in the first game of the season, But, the starting five all scored at least 12 points. Part of the starting five was Jaren Jackson Jr., the stud freshman big who looked the part. He finished with 13 and 13, but was 9-for-10 from the free throw line. Having a big that can shoot like that from the line will pay dividends for the Spartans.

– I talked about it a ton in the offseason and Izzo made the correct move. Cassius Winston got the start over Tum Tum Nairn, which is 100% the smart thing here. Winston balled out and more importantly cut down on his turnovers. Last year he was a superb passer, but was careless with the ball, something that plagues this team. Winston had 8 assists to 2 turnovers yesterday. That’s the key to this team winning a title. If they can take care of the ball, they’ll be in San Antoino.

– Villanova was sluggish in its win over Columbia, but there were two important pieces to the game. The return of Phil Booth and the start of Omari Spellman. Booth was the hero in the title game a couple years ago as he led Nova in scoring. He missed pretty much all of last year with an injury. Spellman was supposed to play last year but the NCAA ruled him ineligible. He makes Nova a different team due to his ability to play inside and pass from the post. He finished with 11 and 11.