Action News Jax- Students in St. Augustine are protesting after a restaurant worker dressed up in black face on Halloween.

A viewer sent Action News Jax photos of a woman in black face at The Bunnery Bakery & Cafe on St. George Street.

There’s no such thing as bad press. Usually. Unless you’re the Bunnery Cafe and you’re all over the internet because an old lady chef dressed up in blackface for Halloween. But then again, maybe this is one of those gimmick restaurants, like Medieval Times, where the employees portray racism throughout history? I doubt it. 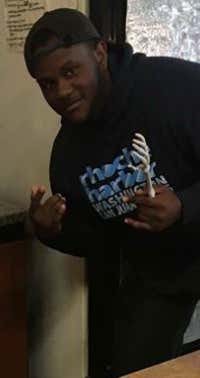 Because he is not angry. Quite the opposite. Dude seems to think it’s funny. And I find it very funny that he thinks it’s funny. He probably spent the morning beating the pancake batter with that skeleton hand as a whisk. Popped into a photo with his colleague and has no idea there’s a protest erupting outside. Kinda takes the sting out of the protest when you have a black guy happily posing alongside the offensiveness.

Next we have this guy:

Dressed up as tin of dip in order to throw people off the scent. But make no mistake–it was all a ruse to dress in blackface. I commented on this Instagram post with a joke about how racist this costume was, and people lost their MINDS. We had racists coming out of the woodwork, saying that this wasn’t racist, DMing me and calling me the “boy who cried racism.” Meanwhile, I was giggling like a silly bitch for starting a race war of Instagram comments on a Saturday!

Inevitably, there were a number of Kaepernick costumes. But this guy went the whole 9 yards and painted his face to really drive the point home:

Look–I like a cleansing mud mask facial as much as the next girl. But when you surround it with a costume that clearly says, “I’m depicting a black person,” you’re no longer trying to exfoliate and open your pores; you’re just a dick.

There are three distinct categories of blackface costumes. You have people who are actually making a racial, mocking statement in blackface–the bad guys. Then you have people who don’t realize it’s offensive because they don’t know the history of minstrel shows–the morons. And finally, you have people like the dip guy who aren’t depicting black people at all. Maybe it’s harmless, but in my incendiary opinion, you shouldn’t black your face for Halloween in 2017. Unless you’re a Navy SEAL and you’re camouflaging yourself en route to killing some bad guys. In which case it’s awesome.