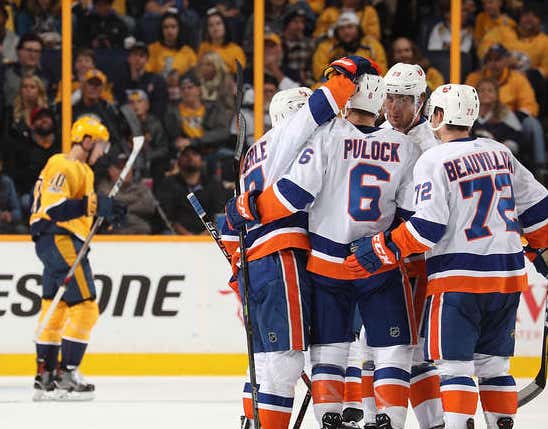 We’re now almost a month into the season and I still can’t place my finger on just where this Isles team sits in terms of potential. The skill is there, the confidence is there, but for some reason this group just hasn’t been able to fire on all cylinders. That was up until Saturday’s 6-2 win over the reigning Western Conference champs in Nashville.

1. Dougie’s comments following last week’s 6-4 loss to the Wild could not have been more accurate. His criticism of the powerplay [calling it every synonym for ‘pathetic’ a thesaurus could offer] and how his go-to guys weren’t stepping up when needed came at the right time and must have inspired this group to begin to find their real potential. They were met with one of the Isles best games of the season, and a big two points against a huge opponent out of the west.

2. There’s almost too many good things you can say about the way the Isles won in Nashville. The first period alone was one of the best periods I’ve seen this team play in legitimate years and the powerplay looked, dare I say it, good. From the jump the Isles looked ready to compete and made it obvious that past mistakes that lead to the loss of points we’re not going to be repeated that night.

3. A major part of Saturday night’s success was the inclusion of Ryan Pulock, who has been in and out of the lineup all month. For a player advertised as an offensive-defenseman with a rocket of a slapshot and the ability to QB a powerplay it shouldn’t have been as big of a surprise when his injection into the powerplay unit proved fruitful. His contribution on 2 of the powerplay’s 3 goals that night might just be enough to sell Dougie on a regular starting role.

4. Mat Barzal continues to impress as he picked up his 6th point of the campaign in Nashville. I can’t stress enough just how fast he’s improving and finding his role within the room. As much as we heard about his playmaking ability putting him apart from others I think his speed and how he uses it is his best quality. If he keeps improving at the rate he has been I wouldn’t be surprised to see him back on the 1st powerplay unit.

5. Speaking of finding his role, we may finally be back to seeing JT doing JT things as he picked up his 2nd hat trick in 3 games Saturday night, so I guess you could say things are getting pretty serious. The eight minute span in which he picked up the natural hatty were by far his best span of hockey on the year and may just be what he needed to kick himself into gear as the season starts to hit it’s stride.

6. Of all the goals scored in the 6-2 win, no goal was more important then the one that kicked the game off just 4:21 into the 1st period; Jordan Eberle’s 1st as an Islander. His two goals, three points on the night were a major pick-me-up, as he played his first game not centered by Tavares, instead completing a line of Nelson/Barzal/Eberle. His 9 points in 11 games are proving that Garth might have just made the right move in acquiring him straight-up for Ryan Strome.

7. While we’re talking Ryan Strome; it definitely seems like Edmonton is loving the deal just as much as we are here in New York. Ol’ Stromeshow definitely feeling that warm, Canadian welcome more and more with each passing day. Just two peas in a pod that Ryan Strome and Edmonton Oilers organiza-… wait, what?

Garth is a Wizard.

8. With seemingly everything clicking on both offense and defense following the Nashville game, I can’t not bring up the performance of Jaro Halak, and how he was the absolute catalyst in the win. 21 0f 22 saves in a game where he didn’t see much action, but as always I find myself needing to point out the fact that it was more about the times in which they made the save as opposed to the amount of saves made. Halak came up huge when needed and it allowed the offense to win him the game.

9. As it stands, Halak is grossly outplaying Greiss but that’s not to say he should begin bearing the majority of starts. I think splitting starts as Dougie has done up until this point is what will allow each goalie to play his best. Allows enough starts to maintain a rhythm while also enough starts to play themselves out of a funk[looking at you Greisser]. Jaro’s .916 Save% is currently .006 above league average, while Greiss’s .898 is, well, you do the math.

10. As we all expected, Josh Ho-Sang is adapting to AHL life quiet well with two points in two games. His first goal coming just minutes into his AHL season. I don’t expect his time in Bridgeport to last long, though if this current group of forwards are able to continue finding success he may be out of luck. Only time will tell for the Ellis Islander.

11. Dougie’s decision to go with a new lineup on Saturday ultimately is what won his team the game. By begrudgingly separating JT and Ebs he was able to distribute the offensive talent among all four lines and continuously roll out each line into the next with confidence. JT and Lee supporting Bails on the 1st, Barzal feeding Nelson and Ebs on the 2nd, Cizikas with Ladd and Chimmer as the energetic 3rd line and Beau adding some flash to Kulemin and Clutterbuck’s 4th. They aren’t the prettiest of combos but they’re balanced, and as the on ice product will tell you, are working.

12. In Butch Goring news, it’s clear that a mind that’s been lost for some years now is only getting worse, as we were gifted the greatest Butch-ism of all time. That Tommy Tavares is a serious contender for the Hart this year.

Final thought: The Nashville game is a major step in the right direction as it proves that when this team is clicking it can beat pretty much anybody on any given night. A lone 6-2 road win doesn’t mean everything is a-okay for this team and that it’s smooth sailing until April, but this is a good start to getting on the right track and continueing to pick up points as the season marches on.

A win tonight against the league’s best in the Golden Knights can keep the momentum rolling.