CNN - Actor Anthony Rapp has accused Kevin Spacey of making a sexual advance at him when Rapp was 14, Buzzfeed reported Sunday. In an interview with Buzzfeed, Rapp said Spacey picked him up, put him on his bed and “was trying to get with me sexually” in 1986. Spacey was 26 at the time. In response to the allegations, Spacey tweeted that he was “beyond horrified to hear [Rapp’s] story.” Spacey tweeted: “I honestly do not remember the encounter, it would have been over 30 years ago. “But if I did behave then as he describes, I owe him the sincerest apology for what would have been deeply inappropriate drunken behavior, and I am sorry for the feelings he describes having carried with him all these years.”

In an interview with BuzzFeed News, Rapp is publicly alleging for the first time that in 1986, Spacey befriended Rapp while they both performed on Broadway shows, invited Rapp over to his apartment for a party, and, at the end of the night, picked Rapp up, placed him on his bed, and climbed on top of him, making a sexual advance. According to public records, Spacey was 26. Rapp was 14. For years, Rapp, now 46, told no one about his experience, and he has never spoken with Spacey since. But as Spacey’s star began to rise through the 1990s and 2000s — including a Tony Award, two Oscars, a decadelong run as the creative director of the Old Vic theater in London, and six seasons and counting on the hit Netflix series House of Cards — Rapp’s frustration, anger, and incredulity with the sexual boundary he said Spacey crossed with him grew as well. Seeing Spacey now, “My stomach churns,” Rapp said. “I still to this day can’t wrap my head around so many aspects of it. It’s just deeply confusing to me.”

I’ll tell you what, my friends. I’ve seen a lot of deflection in my day. I’ve seen a lot of spin zone. But coming out as gay as some sort of distraction from you allegedly getting creepy with a 14 year old boy at a party is something to truly marvel at. In the worst way possible. That is the lowest of low. I mean he didnt even try to deny it really. Just essentially gave it the old “Don’t remember, but that sounds like something I’d do!” response. And what was the general reaction from the public? “Kevin Spacey is gay!” Smh, you idiots. SMH.

First of all, no fucking kidding Kevin Spacey is gay. Kevin Spacey is gay as shit. He’s probably too gay for Gay Pat. Hes been gay for 50 million years and everyone knew it. From American Beauty to those preposterously forced bi sexual scenes in House of Cards, that dude was as gay as they come. Its also not surprising that hes a creep. Everything that dude has ever done has given me the willies. This GIF right here is enough Pre Crime for me to lock this guy UP:

This is no doubt the face and behavior of a very strange, very disturbing man.

But anyway, back to the point. This statement that he released is one of the most self serving, tone deaf, and misguided attempts at remorse I’ve ever seen. First of all hes basically lumping pedophilia in with coming out as gay. Like what in the world does Anthony Rapp allegedly getting seduced by a grown man when he was 14 years old have to do with you liking dudes? Spacey was caught being a creepy pervert and his response was “Well it was A) a long time ago, B) I was drunk, and C) I’m gay!!!” Yea yea, we know bro. The whole world already know. But what does that have to do with you making sexual advances on a 14 year old??? Those two things dont equate, creep.

And then we get to the finale. The worst part of this “apology” or whatever you wanna call it. “This story has encouraged me…” Bro what! This story is not supposed to be an inspirational tale for you. Anthony Rapp didnt tell this story to be a jumping off point for you to discuss how private you’ve been or how you’ve fucked guys and girls for 30 years. Anthony Rapp is not here to help you work through your social issues, you idiot. Hes trying to expose you for the creep that you are so that other people know that youre the type of dude who would try to hook up with a teenager at a party.

But, like I said its a master class in deflection and spin. This is some Frank Underwood shit right here. This is life imitating art. Caught in a scandal? “Look over here! Over here! Not over there!” Look at the headlines. Look at social media. Sure theres talk about the allegations but its a side dish to the entree of him being gay. Look at the Daily Mail – which, I understand is not the last bastion of journalistic integrity, but is the type of place the general public gets their headlines and gossip: 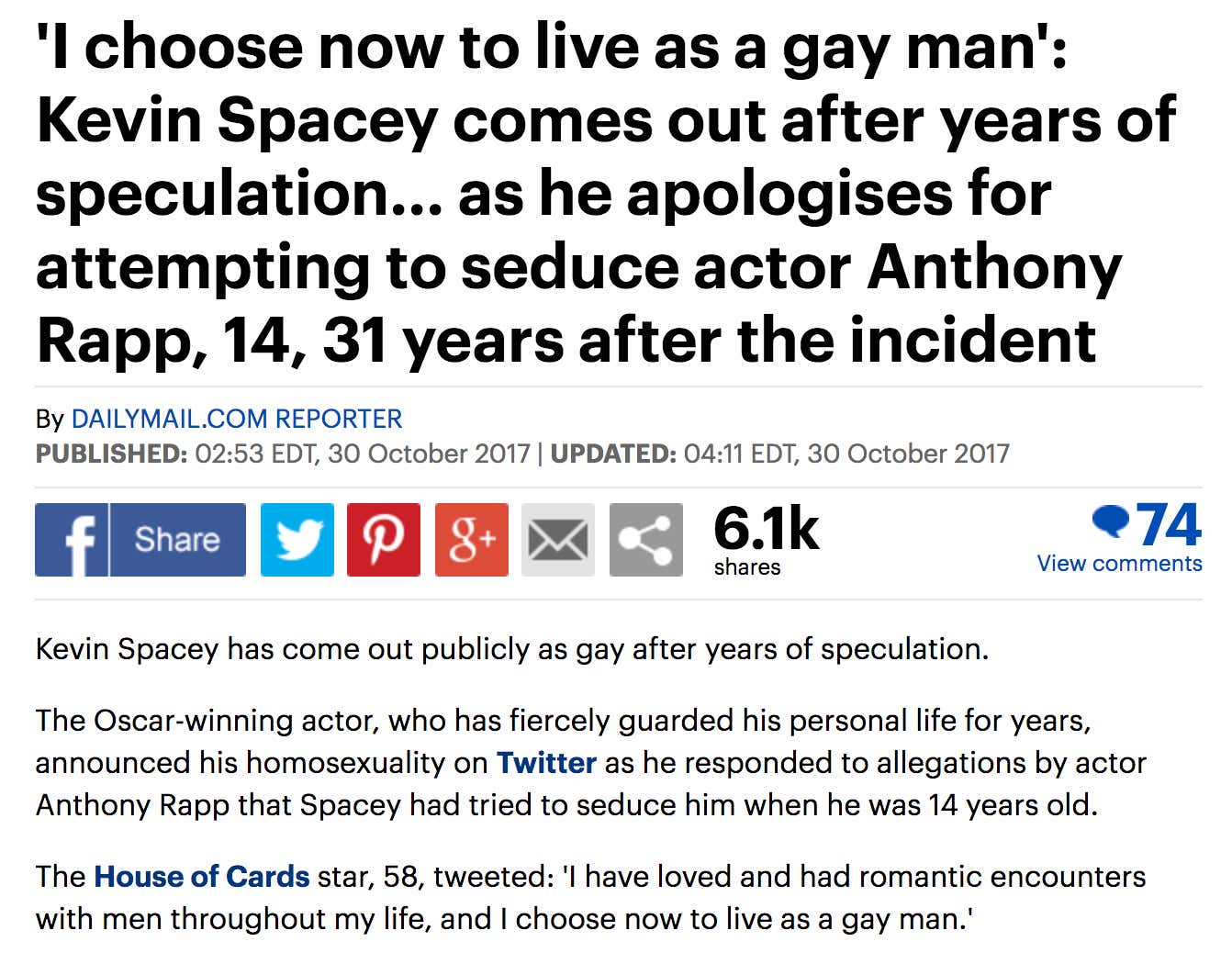 A casual secondary mention in the headline, barely anything about it at all in the first chunk of the article. Which is all anybody reads anyway.

PR 101, I suppose. Distract the simpletons in public from the real story. Play them like puppets. The WHOLE WORLD has known Kevin Spacey is gay for 30 years and he waited and waited to play that card when he needed the spin zone of a lifetime and people are walking right into it. Hopefully enough people see Anthony Rapp’s story so no other young kids are ever left around that sick fuck Spacey. Otherwise he basically just Verbal Kint’d the whole damn world.