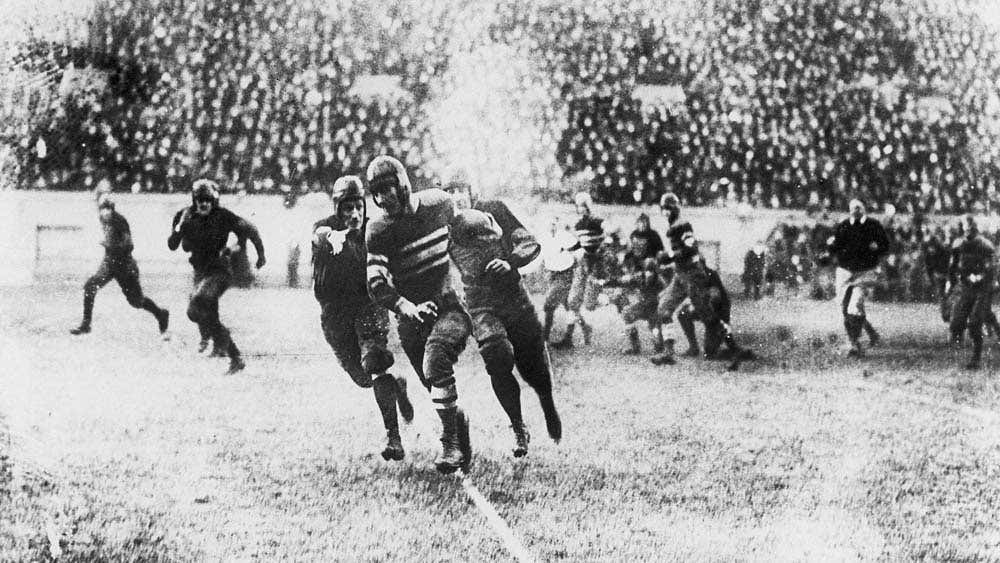 Centre QB Bo McMillan going for a score against Harvard, in the famous C6H0 Game

In one of the biggest upsets in the history of College Football, Centre College beats Harvard 6-0 in Boston, ending the Crimson’s 25-game unbeaten streak. Harvard was the preeminent power in College Football, winning a share of the National Championship in 1919 and 1920. It is the first loss for Harvard in three years. Making the upset more remarkable is that Centre College a small college from Kentucky had an enrollment of just over 200 students.

In the years following the first world war, Harvard emerged as the top program in collegiate football. Coached by Bob Fisher the Crimson won the Rose Bowl a National Championship in 1919 with a record of 9-0-1 and won a share of the National Title a year later, with a record of 8-0-1. Sitting at 5-0-1 they appeared to be heading once again to a possible championship in 1921.

Centre College, a tiny liberal arts school in Danville, Kentucky was a strong football program despite a student body of just 254. Coached by Charley Moran the Praying Colonels were unbeaten heading into their matchup with Harvard on the road. The previous year, Centre led 14-7 at the half before the Crimson pulled away to win 31-14. After that game, Centre Quarterback Bo McMillan turned down an offer take-home game ball, stating when we win next year we will take it with us.

It was clear that Harvard was in for a battle from the start as neither team was able to move the ball much is a scoreless first half at Harvard Stadium. In the third quarter, Centre scored the game’s only touchdown on a 32-yard run by Bo McMillan. The rest of the game saw both defenses stiffen as the final score was Centre 6 Harvard 0. Centre would go on to finish the season with a record of 10-1. The only loss came at the end of the season in the Dixie Classic, a forerunner of the Cotton Bowl in Dallas. The Praying Colonels suffered a 22-14 loss to Texas A&M in a game that gave birth to Aggies legendary 12th Man.

Centre College today is Division III school while Harvard is one of the top programs in the Ivy League. Neither factor much in the National Championship conversation, but the upset remembered as C6H0 has its placed carved forever in college football lore. In 1950 it was voted as the greatest upset in sports in the first half-century. In 2006 it was voted by ESPN as the third biggest upset in the history of the NCAA.