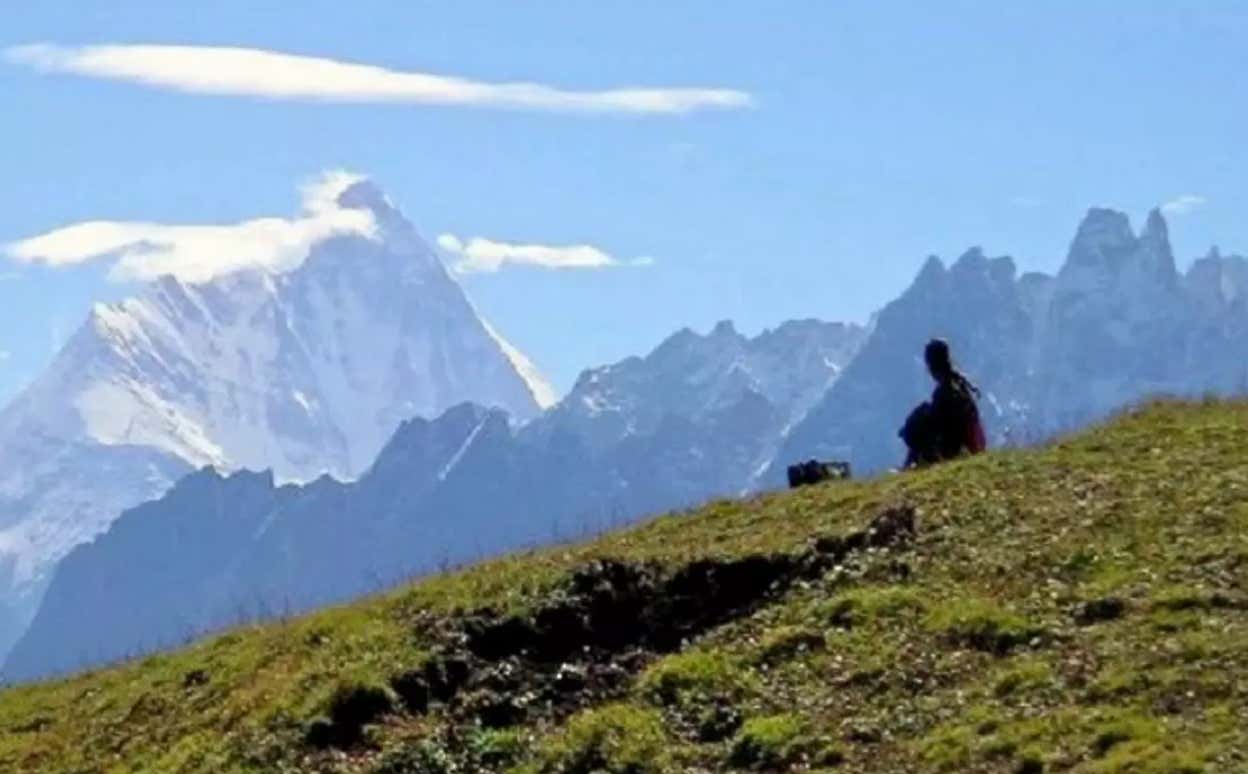 Once upon a time in India, in the dusty foothills of the Himalayas, there lived a young man with a penchant for mischief and a nose for adventure. The man’s feet were stronger than leather, calloused and worn from years of delivering samosas to the market each day. He made delicious samosas: a flaky, golden crust enveloping crispy peas, spicy carrots, minced lamb, tender potatoes, and plenty of cumin. Each savory pastry was made with great passion, as the man loved samosas more than anything else. He would cook the batches in the early morning, before the roosters and the goats announced the sun’s glowing arrival over the snowy mountains. Once finished, he would run his pastries to the market as quickly as possible to deliver them fresh. He could cover the 12-mile journey to the market in an hour, running down dirt paths, kicking up dust behind him as he hurried to feed his hungry, devoted customers. It was a hard life, and at the end of each day, the man would collapse on his mat, falling asleep before his head hit the straw. At night he dreamt of building a samosa empire that stretched from Mumbai to Calcutta. He would call the company… “Samosa Sports.” The man’s name was Dev Pamartiviews. 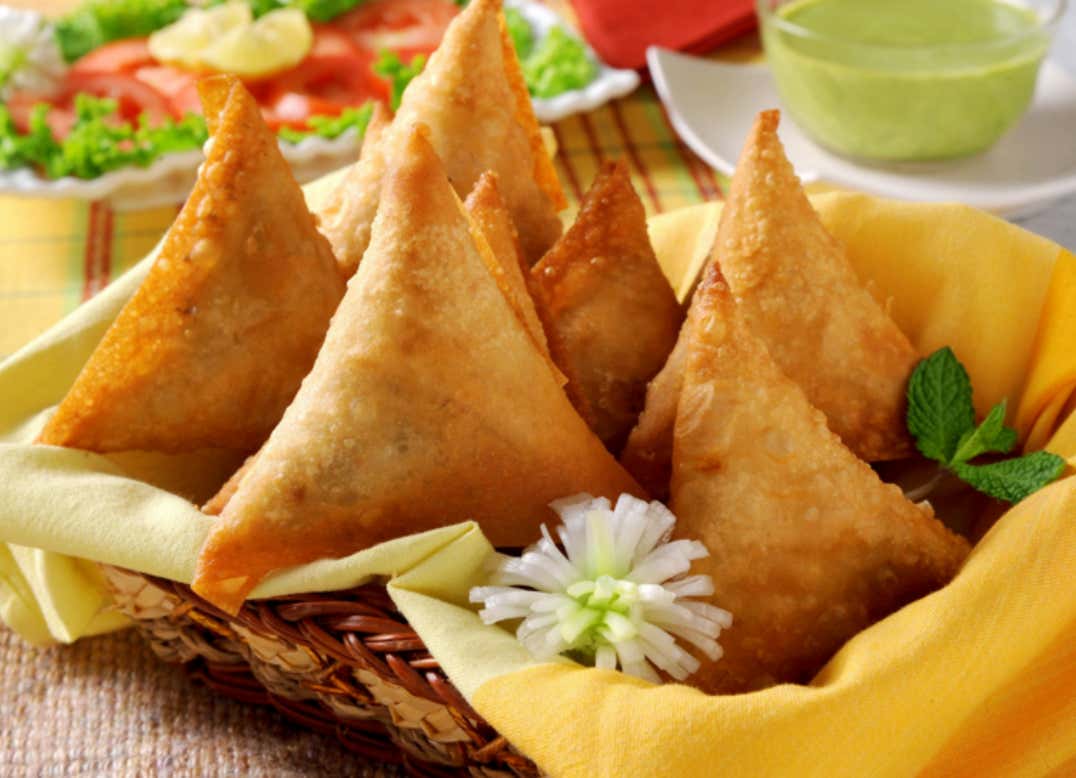 One day, as Dev was hurrying to the market to catch the morning rush, he happened to pass a herd of grazing llamas. Just for a moment, he stopped to observe the curious, curvy creatures. Without knowing, Dev reached into his satchel and pulled out a still-warm samosa, which he began to chew thoughtfully. The flavors exploded in his mouth like never before. Something about the combination of watching the llamas while eating the samosas brought the flavors to life and charmed his trouser snake stiff, nearly overwhelming the young chef as he studied the livestock. It was as though Dev had been struck by a lightning bolt.

“My goodness,” cried Dev, startling the llamas, who shyly avoided the gaze of the young man in the fully-tented tunic. “I can’t believe I never thought to combine llamas with samosas until now. I’m extremely aroused!” 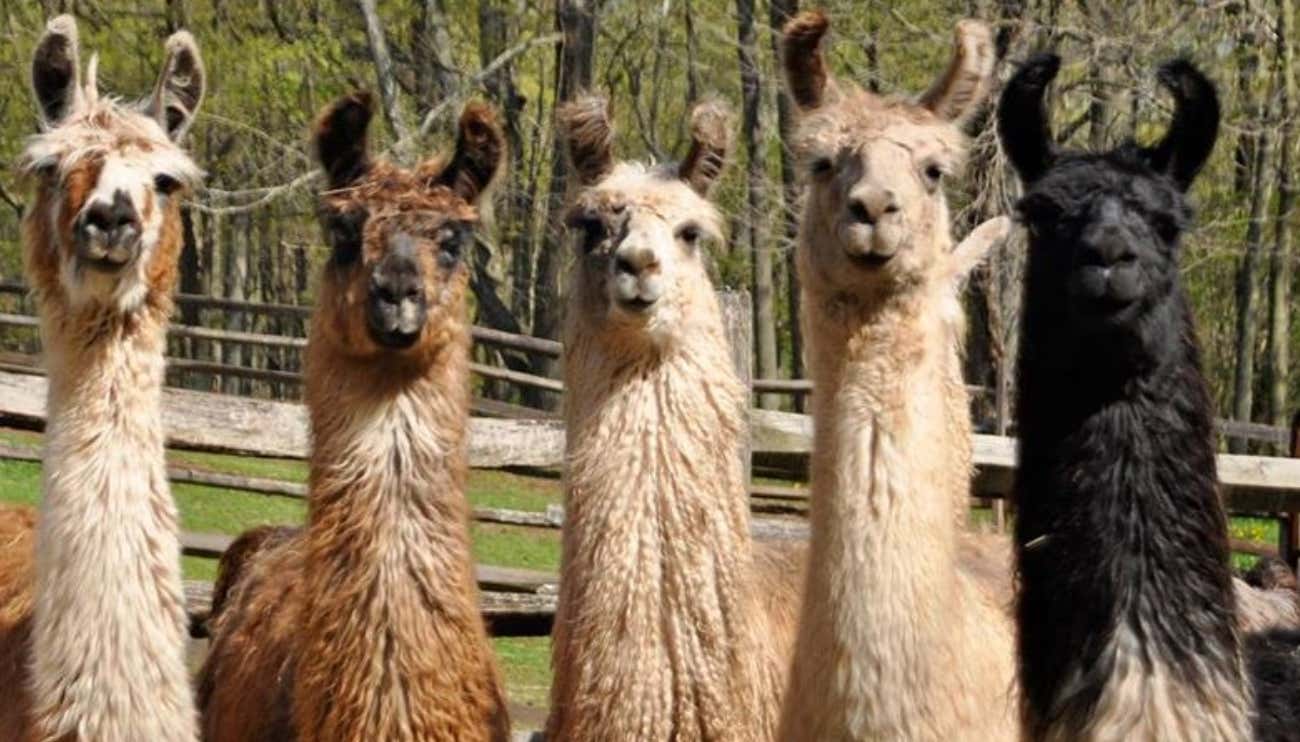 So overcome was Dev with his new discovery that he dropped the satchel of samosas and ran back to his village to borrow his neighbor’s camera. He then returned to the llamas and took pictures of each beast. It was as though the llamas knew what the young man wanted, and soon, the llamas were coming forward, jostling for position in an attempt to have their photos taken. Many stood in scandalous poses, thrusting out their necks and tongues, arching their backs as if to suggest, “come here, big boy.” Once he’d captured the entire herd, Dev gathered the samosas and headed to town to print out the photos.

By lunch time, Dev had taken up his usual place in the market. He arranged the samosas in the usual manner, except this time, under each samosa, he placed a photo of a llama. Soon, there was a line around the block. Hungry young men between the ages of 18-34 had come from near and far to get a glimpse of Dev’s “llama of the day.” After all, what young man doesn’t love to look at a beautiful young llama while eating his lunch? 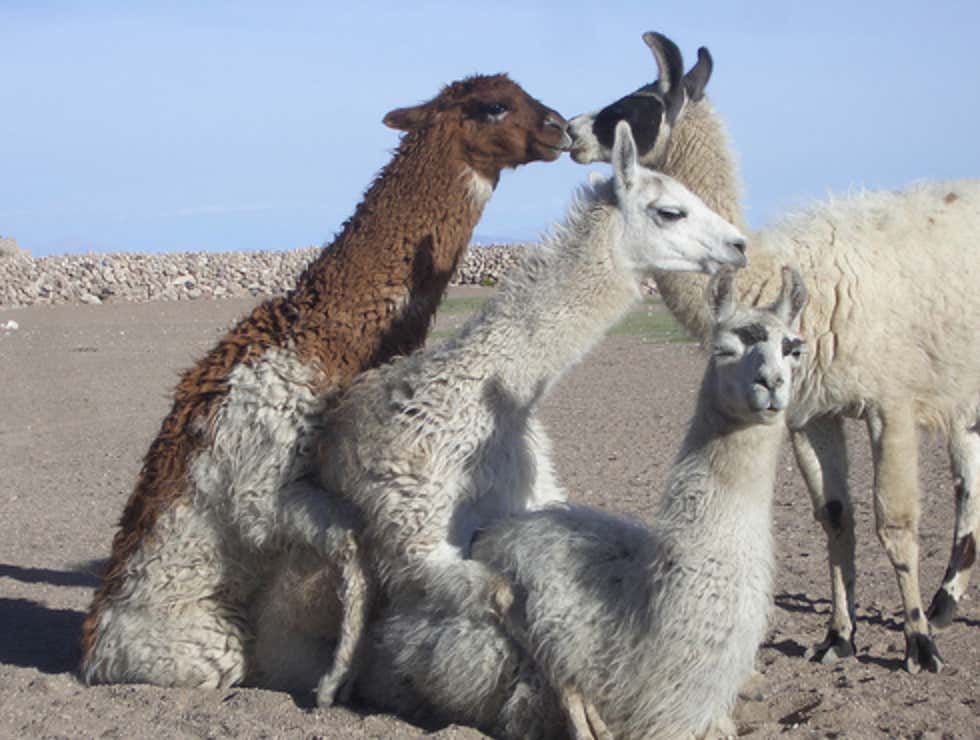 From these humble beginnings, Dev built Samosa Sports into a modern-day marvel of business. He found helpers like Kevin Chuadhry, Keith Madhusudhan, and Badee Billee to contribute their own flavors and ideas to the samosas. The company grew and grew on the heels of such features as “guess that llama”– where only a small, cropped portion of a famous llama’s rear was shown. It was a strange idea, given that llama’s dung often clings to their fur, so these pictures were riddled with dingleberries. But it became a hallmark of the fledgling company. Soon, Samosa Sports was making t-shirts because the cost of making t-shirts in India is outrageously cheap, so why wouldn’t they? Seriously, you can’t imagine how little one has to pay for t-shirts there. It’s like buying dirt sandwiches. And thus, with a steady revenue stream and an ever-growing fan base, it seemed that nothing could stop Dev, his team of chefs, and his legion of growing fans.

Well, as it turned out, not everybody was thrilled with Dev’s meteoric rise. Envy is the ugly, inevitable bastard child of success. It seemed that with each step forward, Samosa Sports was met with a hailstorm of lawsuits and protests. Llama farmers complained that Dev was portraying llamas in a salacious, objectifying manner. When Dev wrote that any llama wearing skinny jeans was basically asking for another llama to breed with it, the outrage burned like every single shit ever taken in India.

Perhaps the most infamous incident occurred when Dev found a photo of an extremely fresh samosa that belonged to the famous cricket legend Sachin Tendulkar–widely regarded as the greatest batsman of all time. Dev published the photo on his “samosa sports” website with a note saying, “check out the crust on this samosa.” Fans of cricket and samosas joined forces in voicing their dismay over such a lewd display of a samosa that had only just been removed from the oven. “This samosa is too young!” screamed organizations that hate undressed, young samosas. “Where do we draw the line?”

These were dark days for Dev, whose stubborn devotion to his vision was guided by an unapologetic, unwavering compass that pointed only to the moon. For that was the direction Dev had charted from the days when he was running his samosa route barefoot, long before the llamas and lawsuits and a fancy hairplug treatment. Through it all, Dev found solace in a quote from the leggy American pop star, Taylor Swift: 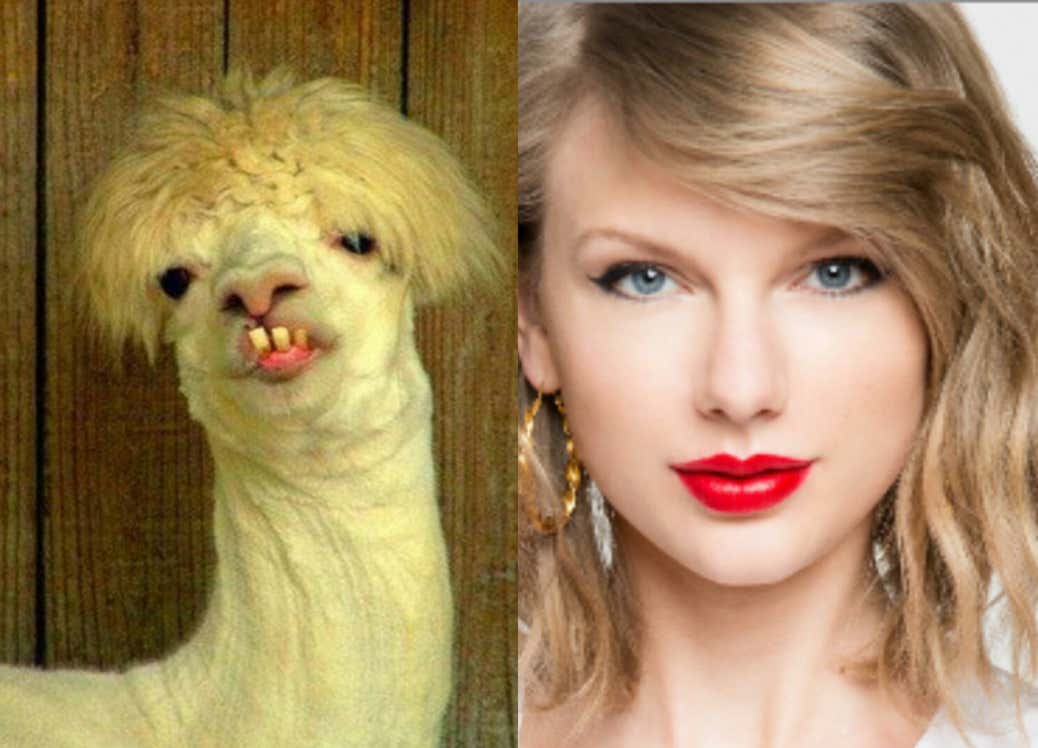 It took over a decade before Samosa Sports was recognized as a legitimate power among India’s culinary enterprises. Despite Dev’s bombastic self-promotion (he often referred to himself as the “sultan of samosas” and a “mogul of meat pastries”), it took 14 years before Dev was approached by Tasty Bite Eatables with an offer. Tasty Bite is one of the largest specialty frozen food manufacturers in all of India, and their president–Peetar Chernhink–is widely regarded as one of the great business minds of the modern era. Dev agreed to sell just over half of Samosa Sports in a deal that consolidated all the satellite chefs in one kitchen in the great city of New Delhi. With the financial backing of Tasty Bite Eatables, the acquisition ushered in a new phase of growth, popularity, and dominance for Samosa Sports.

By 2017, Samosa Sports’ crown jewel was their “Pardon My Samosa” recipe–a magical and delicious product from the whimsical minds of Badee Billee and the upstart, non-conforming PFT Tippaneeker. Tippaneeker had developed his own style of baking samosas by turning traditional recipes upside down, intentionally fudging ingredients in an effort to parody the many “internet chefs” who held strong opinions on samosa cuisine. Combining Tippaneeker’s sagacious wit with Billee’s robust flavors resulted in a samosa that was enjoyed by over a million hungry fans, 3 times a week! It didn’t take long before the larger samosa companies wanted a piece of this pie.

In short order, BSCN (basic samosa cooking network) reached out to Dev to offer the “Pardon My Samosa” boys a cooking show. It seemed like a windfall for Samosa Sports: two of their biggest stars would have a television platform to showcase their cooking for their fans. The deal was inked and the champagne was served, for here, truly, was a confirmation of Samosa Sports’ undeniable impact on the samosa world. It seemed that everyone was thrilled over the alliance. The matchmakers had arranged a marriage that was sure to endure any obstacles thrown their way.

But envy and hypocrisy–the barnacles that cling to the hulls of great vessels–stood waiting in the shadows for even the slightest misstep. What Dev could not have foreseen was that within the ranks of BSCN, a handful of llama advocates had not forgotten Dev’s descriptions and photos of llamas from nearly a decade before. On the eve of the series premier of “Samosa Sports Moped Talk,” these guardians of llama justice took to twitter to voice their disgust over the alliance. Unearthing llama jokes from a lifetime ago, they stomped their feet and wrung their hands, crying out against Dev’s shameless objectification of llamas, alpacas, and even vicuñas (but never guanacos, which are gross. Seriously, if llamas are a 10, guanacos are like a 4, aka a New York 3).  The president of BSPN folded like a mud hut in an earthquake, cowardly succumbing to the pressures from his vocal underlings. After one episode, “Moped Talk” was no more.

It was a dark day for Dev and his team, to be sure. But from the ashes of despair rose a phoenix. One loyal employee–Makadee Bandar–began a crusade to reveal the hypocrisy with BSPN. Bandar discovered a trove of tweets insulting llamas from the very employees that had accused Samosa Sports of painting llamas in a negative light. His efforts to expose the accusers were both inspired and terrifying. So complete and so devastating was his blitzkrieg that one wonders if the man slept during this crusade. Indeed, he would show up to work with bloodshot eyes, fingertips raw from typing through the night, voice hoarse from shouting every time he found another llama-shaming tweet from a BSCN employee. By the time he was finished, the earth between BSCN and Samosa Sports was so scorched that one would never believe there had been a bridge between the two companies.

In the end, Dev’s company returned to its roots. Today, they continue to make delicious samosas for everyone. A talented staff of chefs, recruited from all across India, provides thought-provoking recipes and pushes the boundaries of the samosa world each week. Some have Harvard degrees while others don’t; some prefer dating Autumnal gourds while others prefer humans; some favor cricket clubs forever doomed to mediocrity while others are loyal to a franchise that seems to win every single year. But for all their differences, they are united under the banner of Samosa Sports–a company that was never afraid to ask that eternal question: what are samosas for? The answer, of course, is you.

PS- This is a work of fiction. Names, characters, businesses, places, events and incidents are either the products of the author’s imagination or used in a fictitious manner. Any resemblance to actual persons, living or dead, or actual events is purely coincidental.