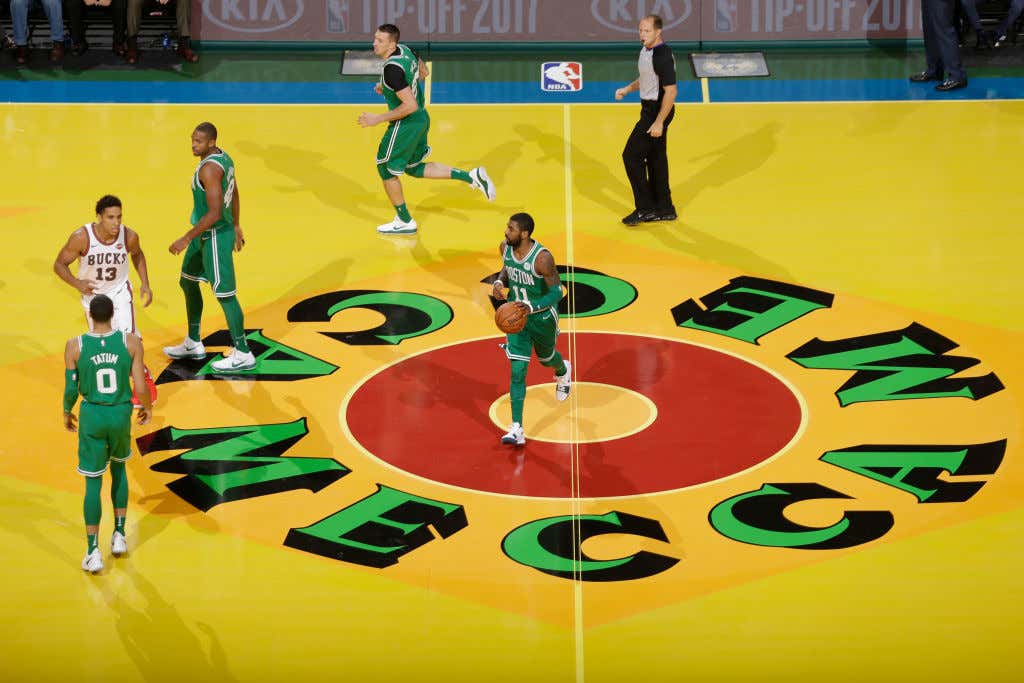 Now that’s what I’m talking about. That is the type of performance that I was waiting to see from this team. Up until this point, they hadn’t really beaten a “good” team, or at the very least a team projected to be one of the top teams in the conference. As everyone already knows, dropping the opener to CLE and then this same MIL team the next night, last night was the type of revenge I craved.

To be honest, watching this game it reminded me so much of last year’s team. The classic 2nd quarter disappearing act, the strong third quarter, and the PG closing out the fourth. I guess that’s why I was never really nervous even when the Celtics blew their early 10 point lead. We’ve seen this team play this exact game 1000 times. What makes me happy is this time it was done with all young kids, and they still pulled it out. Your Boston Celtics now own the longest winning streak in the East AND have the most road wins in the East. They have the third best point differential in the conference. Things are starting to look more familiar with this group, and that’s a relief.

With that said, let’s get started.

– No brainer here. For the first (and hopefully not the last) time in his Celtics career, we begin with Kyrie Irving. To put it simply, Kyrie was fantastic. By far his best game as a Celtic, he checked every box for me last night. Before we get too ahead of ourselves, let’s first enjoy his performance uninterrupted.

24 points, 3 rebounds, 7 assists, 2 steals, 1 block on 10-18 shooting in 34 minutes. THIS was the Kyrie I have been expecting based on everything I was told on Twitter. The biggest difference to me wasn’t system related either. I fucking hate when people say that. Kyrie had struggled in previous games not because of Brad’s system, but due to the fact that he was simply missing shots he normally makes. Shots at the rim, shots in the paint, things you knew were going to come around and when they did, it would make a gigantic difference. Well, look at his shot chart 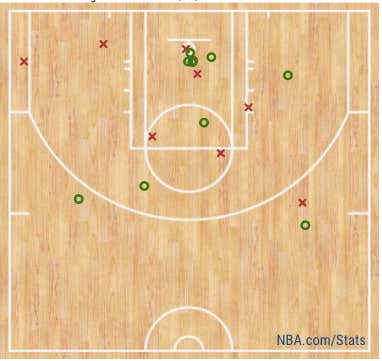 much much much better. This is an extremely important part of Kyrie’s game because it’s his threat of finishing in this area that helps setup his deadline midrange game just like we saw in this game. While his first half was more of an offensive scoring display, I enjoyed his second half more. 8/5 in 15 minutes and just 1 TO, this was the first time this season that I felt Kyrie enforced his will for an entire game, which is truly what this team needed to pull out the win.

Now the key will be can this type of performance happen consistently. I’m betting yes.

– Not to be outdone though, was Al Horford. Can you believe there are STILL people who say he’s not worth the money? No I’m serious. Well last night was example 324324587632458 of why those people are complete morons.

This was Aggressive Al Horford, and when you get Aggressive Al Horford you’re fucked as an opponent. There’s just not many ways to stop him. He can take you down low and kill you with a jump hook or find a cutter, he then takes his new found confidence and kills you from deep. His 27/9/4 on 11-15 (4-5) carried this team, and it was his 13 point quarter that helped the Celts take a lead into the fourth quarter.

Considering he was relatively quiet the first time these two teams played, I was happy to see him bounce back and show why he is so valuable. So far this season he’s been matched up with Simmons, Embiid, Giannis, and Porzingis and has outplayed them all. Not bad if you ask me.

– This might be a little extreme, BUT I FUCKING LOVE ARON BAYNES. It’s insane how much of a difference he makes and how clear it is that a player like him was exactly what this team is missing. He had 12/7 in his 23 minutes, but it’s more than the numbers. It’s the mentality. Do you know how much I appreciate not even remotely worrying about defensive rebounding when he’s in the game? That used to keep me up at night watching guys like Amir and Tyler Zeller get pushed around. Well, last night Baynes had a DREB% of 43.8%. His total REB% was 21.2%. I am ready to say he has single handedly changed how this team approaches rebounding.

Once again the Celtics won a rebounding battle, this time against a long as hell team with pretty good bigs. But what I love more about Baynes is he’s not just a great rebounder, but he can hit a little midrange too! Oh and he’s a fantastic FT shooter. I can’t get enough Baynes. Need more Baynes

And everyone wanted to talk about that Giannis missed dunk attempt. Well I say credit Baynes for having the balls to even try and stop him. While I was certain he broke his wrist on that fall, I quickly remembered what Tommy said about seeing him in the shower. The guy is a monster.

– It was quiet, but effective. That’s how I would describe Jayson Tatum’s night. I’ll take 12/2/3 on 50% shooting in 27 minutes and you should too. It’s crazy how calm, cool, and collected he is at all times on the court. His little pump fake/pull up jumper midway through the 3rd quarter as the Celtics were beginning to make their run is exactly the shot he’s going to get time after time because his defender is going to help off him and then rush back to close out. If he can hit that shot consistently, that is going to do wonders for this offense.

– Shame on all of us for not knowing any better. We should know that even if Marcus Smart is going to drive you crazy for 90% of a game with his shot selection, he’s going to make a play or two that’s going to help decide a game. That’s just what happens. Well, he reminded us of that in the fourth quarter

His two threes were big, he led all Celtics with 8 points in the quarter which also happened to be all his points for the night. Not the closer we expected, but the one we got.

– I can’t say enough about how this team has started defensively. Holding another team to under 100, the Celtics are currently giving up 96.0 points a night. This is the best in the Eastern Conference and fourth fewest in the entire NBA. A lot of factors go into this. One is schedule, one is the improvement on the glass, and the other is the rotations have been superb. For a bunch of rookies and young players getting their first opportunity, the Celtics are flying around on the defensive end.

– Speaking of defense, there is one person on the planet who has shown he can stop Giannis, and his name is Semi Ojeleye. He defended him well in their first meeting and you thought, OK, this was just some weird exception. Well, he did it again last night. Semi is so effective in part because he is made of stone and gets great leverage, but also because he doesn’t bite on pump fakes. The guy stands his ground better than anyone I’ve seen on this team. I’m not kidding

– I’m ready to just let Terry Rozier do whatever he wants. His shot is still struggling, but he plays with such a confidence I don’t even care. I also appreciated his 7 rebounds, continuing the trend of being one of the best rebounding guards in the league.

– 19-22 from the FT line eh? A close win? Maybe things are getting back to normal

– I mentioned it earlier, but that 2nd quarter was pathetic. Going 6-22 (1-11) was a bit troubling, and the Celtics found themselves in a hole early because they weren’t moving the ball. We all know it when we see it, but when the Celtics fall into this style of play where people stand around and the ball sticks, they are almost never successful and it is extremely frustrating to watch. Is it a surprise that 3rd quarter was so great and they had 7 assists on 10 baskets?

– It also doesn’t help when you get almost nothing from your bench for like 90% of the game. Take away Baynes and his 3-6, the rest of the second unit went 4-23 from the field. That is horrific.

– Is it just me or has the officiating really ruined things so far this year? I’m talking for both teams. It feels like the flow of the game has changed and not for the better.

– I can put up with a lot with this team, but I cannot put up with lazy basketball. Having 7 TOs in the first 11 minutes against a good team on the road is pretty inexcusable. A lot of these were caused simply by using a player in a position they probably shouldn’t be used in. For example, Al Horford is good at a lot of things, but I don’t need to see him dribble from the top of the arc all the way to the rim. That’s not his strong suit. Give it to a guard, let Al go down to the block, and give it back to him so he can either turn and face or find a cutter. Too many times did he try and make a play that wasn’t there and it cost him.

Also not a fan of the strategy where everyone stands around for 20 seconds and hopes Kyrie can bail everyone out with a crazy end of shot clock prayer. Same goes for Smart. That is not basketball and is not how this team should play obviously.

– Yabu was a DNP. I get Brad is saving him for when they really need him, but man it is such a cocktease to have him on the bench and not see his dominance.

– Jaylen, forget about it. Forget this game even happened. 2-10 from the field, 3-6 from the line, just burn the game tape and move on. He did end up making some big time threes, but anytime you start a game 0-8 I’m sorry we have to put you in this section.

If we’re being honest I didn’t really like the approach offensively to start. Jaylen is at his best when he works inside/out. Get him some open lanes to the basket to build that confidence, and then next thing you know his outside shot falls. He did find other ways to contribute, his 9 rebounds were nice, but I think it’s fair to say the Celts dodged a bullet in this game when a guy who had a huge offensive responsibility lays an egg.

– The Mecca court. I don’t see what’s so special about it, I find it ugly as fuck and honestly quite distracting. Maybe some things should just stay in the past

– You’re lying to yourself if you weren’t completely freaked out when Tatum landed on a foot and twisted his ankle, and then didn’t come back in the game for what felt like an eternity. This is going to happen for me basically any time a player hits the floor or has a play like that. I am damaged because of Hayward’s injury. It is going to be a lonnnng year.

Now that it appears the Celts are starting to right the ship, it’s important that they don’t overlook their game tomorrow against MIA. With SA on the horizon if you aren’t careful you can find yourself getting run out of the gym in MIA if you lose focus. I fully expect Kelly Olynyk and Jordan Mickey to dominate just because that’s what always happens in these types of games. Win Saturday and you have a shit ton of momentum heading into next week. In the meantime, say it with me