So it’s been a wild last couple of weeks. From Adam C Best, to BVT getting canceled, to Sam Ponder’s tweets, to yesterday’s Jenn Sterger-bombs, to Sarah Spain’s horrendous tweets…it’s been a wild internet ride for the ages. And I think I can summarize it all in this one sentence: We’re all shitty people. We’ve all said some things we regret. We all have Tweets we wish we could have back…but even more than just Tweets, in real life too. Who hasn’t said something ugly to a friend at some point, or hurt someone for our own benefit? It’s part of life. What isn’t part of life is hopping on the Internet and pretending to be perfect while trying to chop down, sabotage, and ruin the lives of people who don’t conform to your faux-perfect ways.

And Sarah Spain. Man. When I got off my high from doing the research and making the video yesterday, I started reflecting and thinking about how absolutely insane and ridiculous the entire thing is, but the one thing that stayed with me, to paraphrase a line from the Hangover, “Wow, Sarah Spain is just a bad person…like deep down into her core”. I don’t know Sarah Spain. I’ve never met Sarah Spain. But the details are out there. She is a manipulative, cowardly, self-serving, all around mean, dishonest, bad person.

PFT and Big Cat were given a TV show because they work tirelessly around the clock, put their work before everything else, and are genuinely two of the funniest people you’ll ever come across. That’s why they were given a show and not you. So if you worked to get them taken off the air instead of working hard to get yourself onto the air, fuck you. That’s as low as it gets. And the thing is, they will get another shot, and you’ll still be without a show, and without an additional revenue stream to your network to keep you in a job.

And the person who started this shit storm, Sam Ponder. Mrs Ponder has sent out racist tweets, and tweets attacking other women 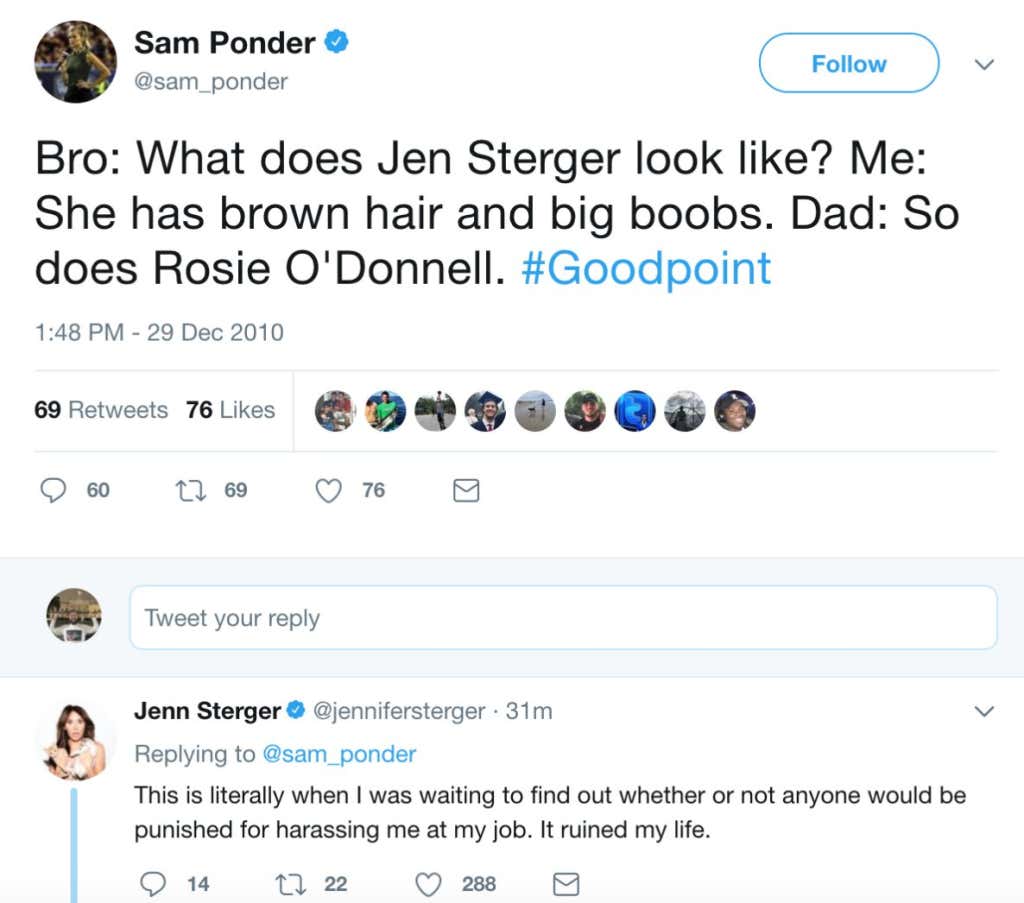 but yet had no problem coming down on Dan (even though she is such an awful person it wasn’t even Dan who she was mad at, it was Dave) over stuff said years ago. She had every right to be mad she was called a slut. Even in the context that he calls everyone a slut, guy or girl, aside, maybe it’s a word we shouldn’t use, fine, that’s fair. But to pretend all her racially insensitive, Jenn Sterger bashing tweets don’t count because they were years ago, but ours do, that’s fucking bullshit. 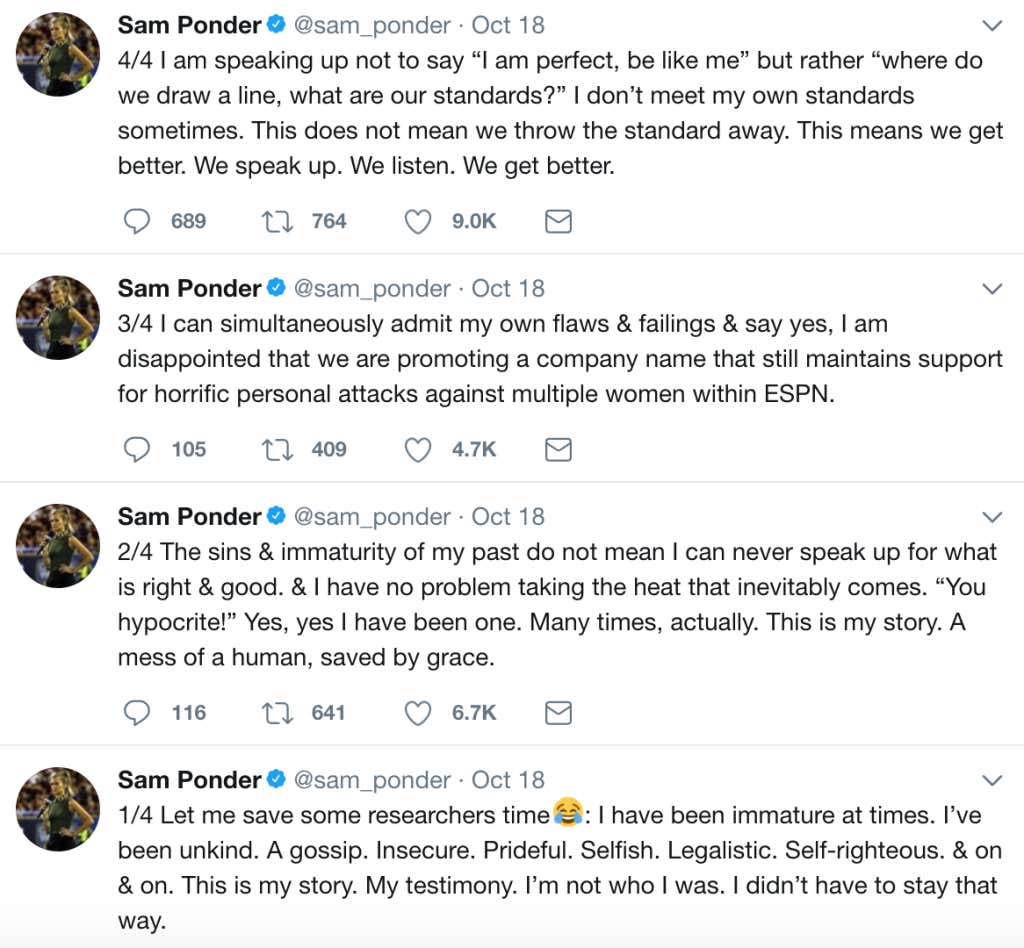 And that’s exactly my fucking point. I have tweets I wish I could have back. I’ve said things in blogs, especially when I started in 2013, that I definitely wouldn’t write today. I’ve grown up, learned, gotten funnier, and improved the way I write jokes and blogs. But there are two things that remain constant:

1) I make jokes. I like to use the comparison of a standup comedian on stage. You know you’re about to see Louis CK talk about jerking off a baby when you walk into a Louis CK show. You wouldn’t walk into the show and then complain to the theater that he made jokes you don’t like. You are an adult and nobody is forcing you to listen to his jokes, but that doesn’t mean his jokes aren’t funny to other people.

2) I own my jokes. When I made a joke about the Flyers owner who died of cancer about 3 hours after he died, I then owned it, and doubled down. Did the joke land? Nope, not in the slightest. It was misguided and off the mark and wasn’t really that funny of a joke (though shout out to me- the premise that he died to inspire the Flyers to do better in the playoffs is a funny premise, my wording of the joke sucked though).

People can find old tweets of mine or blogs of mine when I’ve made fun of people’s looks, weight, disability, gender, race, sex, etc etc etc and I’ll probably own 99.5% of the jokes. I write for a humor website, and I know my audience better than I know my own family. We at Barstool have always just wanted to make our audience laugh, and the awesome thing is, if you aren’t our audience, we aren’t forcing you to read it! How awesome is that?!?

Shame on ESPN for being so gutless and cowardly for caving to Sam Ponder and fucking over Big Cat and PFT. And all the Internet white knights, maybe make sure you don’t have a closet of skeletons before coming after us for the exact same things you did. It’s fucking pathetic. I think Pat McAfee summed it up best, as seen in this morning’s Newsletter:

Amen. We’re going to keep doing our best to make everyone laugh, and we hope you join us on this ride. If you don’t like the cut of our jib, so be it, we aren’t for everyone! Shit, there’s people who don’t like some of the greatest things in the world, like the movie Titanic, or March Madness, or RG3. Doesn’t mean I have to start a crusade against them. It’s just in today’s day and age, everyone has a voice thanks to the Internet. And while that is usually a good thing, to give a voice to the voiceless, it also gives the vocal minority a very loud voice. The 5% of the people who hate us and spend 95% of their day attacking us provide much more outcry than the 95% of people who enjoy us and just go along with their day because…well because that’s how normal people operate in real life.

We’ll continue to be attacked, because the bigger we get, the more haters and losers (of which there are many) will try to bring down our success. Look at every successful “counter culture” celebrity or show of the last couple of decades- Stern, O&A, Jackass…I mean, fucking rock n roll music. You name it, people were outraged. Maybe one day this whole thing will come crashing down, but it’ll all have been worth it. Or maybe we’ll get stinkin’ rich and stunt on all the haters. Hopefully the latter, but either way, we’ll beat on, boats against the current, because that’s really all we know how to do.