Wait what? Shout out to stoolie Marcin Gortat! I knew we had a strong presence in Poland. Send me your address and I’ll send you some really, really big merch.

But really, how great is it that yesterday I wrote this blog saying Lonzo has to disown his dad before he gets him killed, and now Marcin Gortat has backed up my claim? It juts shows NBA players are taking notice of what that idiot LaVar Ball is saying, and they know LaVar is putting Lonzo in harm’s way by running his mouth. Here’s the full exchange, with Gortat responding to LaVar’s claim that with the Wizards coming to town, Lonzo won’t lose twice in one week: 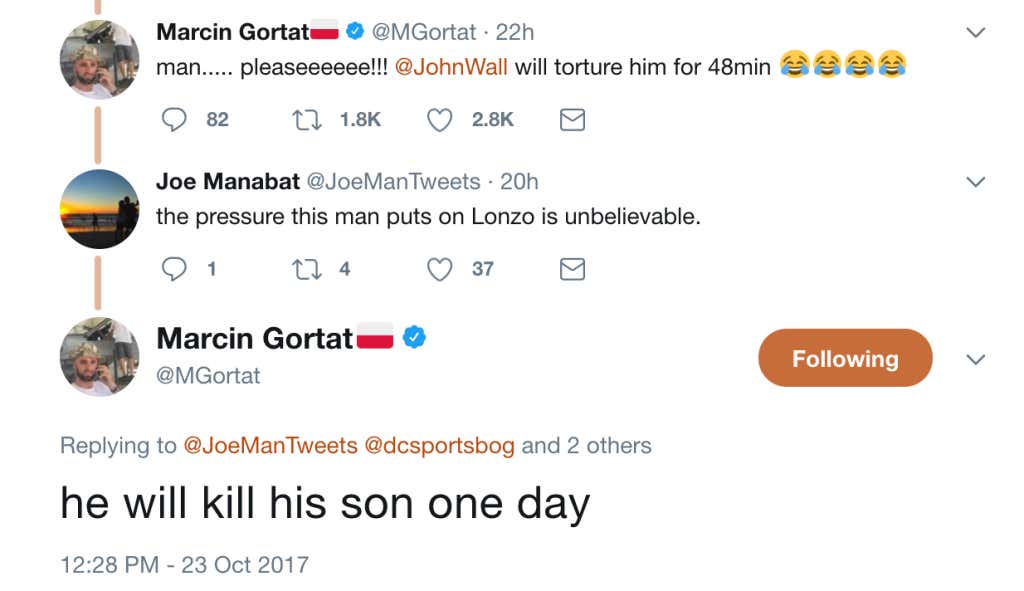 Yup. Talk your shit, LaVar, and John Wall will make an example out of both of you. I just cannot imagine Luke Walton making Lonzo guard him. It’d be career suicide for both of them. I don’t know who on that team will be on Wall, but it won’t be pretty for the Lakers.

I honestly think the Lakers will eventually ban LaVar from attending games. He is going to cost the team wins in the long run. He’s not good for them. His talking doesn’t help anyone besides the opposition, I don’t get how he doesn’t see that. Just wait til he puts the challenge out to Russ. That’s when he gets his son killed. John Wall will humiliate him, but show him mercy. Others won’t be so nice. Poor Lonzo.