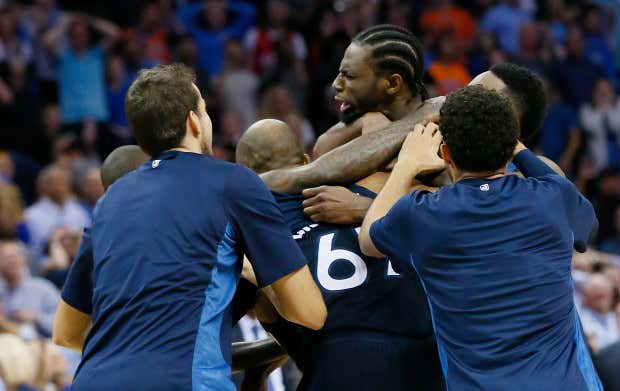 Welcome to another edition of Last Night In The NBA where we catch you up on everything you may have missed from the night before in the Association. With a full day of football on, don’t beat yourself up if you happened to not see what went down in late October in the NBA. I got you. Here’s what happened.

Look I know it’s the first week of the NBA season, and you have to take everything you see with a certain degree of salt, but let’s give proper respect when it’s due. The Brooklyn Nets offense has been LIGHTS OUT. They lead the ENTIRE league in points per game at 124.3. Sure maybe they are also giving up 121.7 per night, but I didn’t say anything about their defense. They’re 3rd in the league in FG% while making the 3rd most FGs, 8th in 3PT%, the whole thing just seems so crazy.

In this game, it was D’Angelo Russell that continued his strong play, with 16/10 on 6-13 shooting

and to Nets fans surprise, he wasn’t alone. Allen Crabbe finally had his best night as a Net, going for 20 points on 7-12 including 4 made threes

That performance right there is basically why they brought him in. What’s intriguing about this Nets team is they still turn it over a shit ton (18) but they score so many points it almost doesn’t even matter.

For ATL, it wasn’t pretty. Ending the night with 34/25% splits, turning it over 16 times, they had their chance after it was 25-19 after one, but then they stopped playing defense giving up 72 points over the next two quarters. Sad!

The lone bright spot had to be John Collins who had his first career double-double with 14/13. He probably won’t win ROY, but from what we’ve seen so far, you can tell he’s going to be really good over time.

And wait, Dedmond shoots threes too? Color me shocked

I’ll never understand people who comment on blogs or tweet “who cares about the NBA season the Warriors are just going to win. The NBA is pointless” Ummmmmm well you don’t know what you’re missing dummy. This game is the exact reason why a random Sunday night in late October can be must watch stuff. This was one of the most exciting finishes we’ll probably get all year, so let’s take it from the top

Shooting 50% for the game, the Timberwolves got great contributions from each of their starters, where only one of them shot under 50% for the game. This was important, because no bench player had more than 7 points. But this game wasn’t about them, it was about their stars playing like stars.

Don’t forget he also made a couple threes.

This performance was probably a lot closer to what most MN fans are expecting out of Teague given the contract that he got.

And finally, there was Andrew Wiggins. Some call him overrated, some call him a bust, well last night the fine people of MN called him a hero. What a performance. 27/7/4 on 10-20 shooting, this was a max extension worthy show

This shouldn’t have come as a surprise though, this isn’t the first time this season we’ve seen Wiggins do this type of thing

The offensive display was impressive, no argument there, but haven’t we already known Wiggins was an elite offensive player? It shouldn’t be ignored how well defensively he played in this game as well, going up against two elite scorers at his position. Wiggins was second on the team with a Defensive Rating of 97.8. He was second on the team in deflections, and led the team in shots challenged at 8. For Wiggins to take that next step, it all comes down to his defense, and in this game as much as he wows you on the offensive end, he brought that same effort to the defensive end. That should make you the most happy if you root for MN in my opinion.

For OKC, so close. Not often is this team going to get 88 points from their Big 3, turn it over just 11 times, shoot 48% from the field, and lose. That’s tough, especially when they thought they just witnessed a Melo game winner.

That’s the West for you I guess

and for the bench, Jerami Grant keeps dunking on people

Nice rebound for MN after that opening loss to SA. Sitting at 2-1, they are very much right in the mix

What sure looked like it was going to be nothing but a blowout actually turned competitive over the last 6 or so minutes thanks to a gigantic Lakers 23-5 run. But sadly, or not sadly if you as my personal opinion, they ran out of gas in the final minutes and the Pelicans were able to pull away. It was an 11-0 run to close that did the trick for NO, and as expected, Boogie/AD combined for 49/28/11 on 17-35 shooting

Remember when we all were curious if this pairing would work? Well it’s not working in terms of wins, but everything else has been a dream. These two are UNSTOPPABLE when they are on the floor together.

I did also enjoy that it was former Celtics E’Twaun Moore and Jameer Nelson that hit the dagger baskets against the Lakers. Maybe I was alone in that fact, but I smiled.

For the Lakers, Lonzo Ball was presented with a prime opportunity to win this game, a big time wide open three, and he missed it, in fact he missed most of his shots in this game going just 3-13 and 0-5 from behind the arc. He did had 8 points and 8 rebounds and these nice 13 assists

but so far on the season he’s shooting 34/29%. That’s not great. If not for the PHX Suns, I’m positive his start would look a whole lot different.

Also depressing if you’re a Lakers fan was Brandon Ingram couldn’t build off his solid previous outing either. He had just 7 points on 3-9, in fact only one LAL starter scored more than 8 points. This game was about their bench, who got 20 from Kuzma

The Lakers now join four other teams at 1-2 in the West, and this was the easy part of their schedule. They have WSH/TOR/UTA/DET/POR on deck. Things could get real ugly real quick. How terrible for them.

And that’s it! You’re now all caught up on everything that went down last night in the NBA, so now you have something to talk about at the water cooler. There are 8 more games on tonight, so if you feel like watching MNF instead, don’t worry, just check back here tomorrow morning and I’ll let you know what happened.