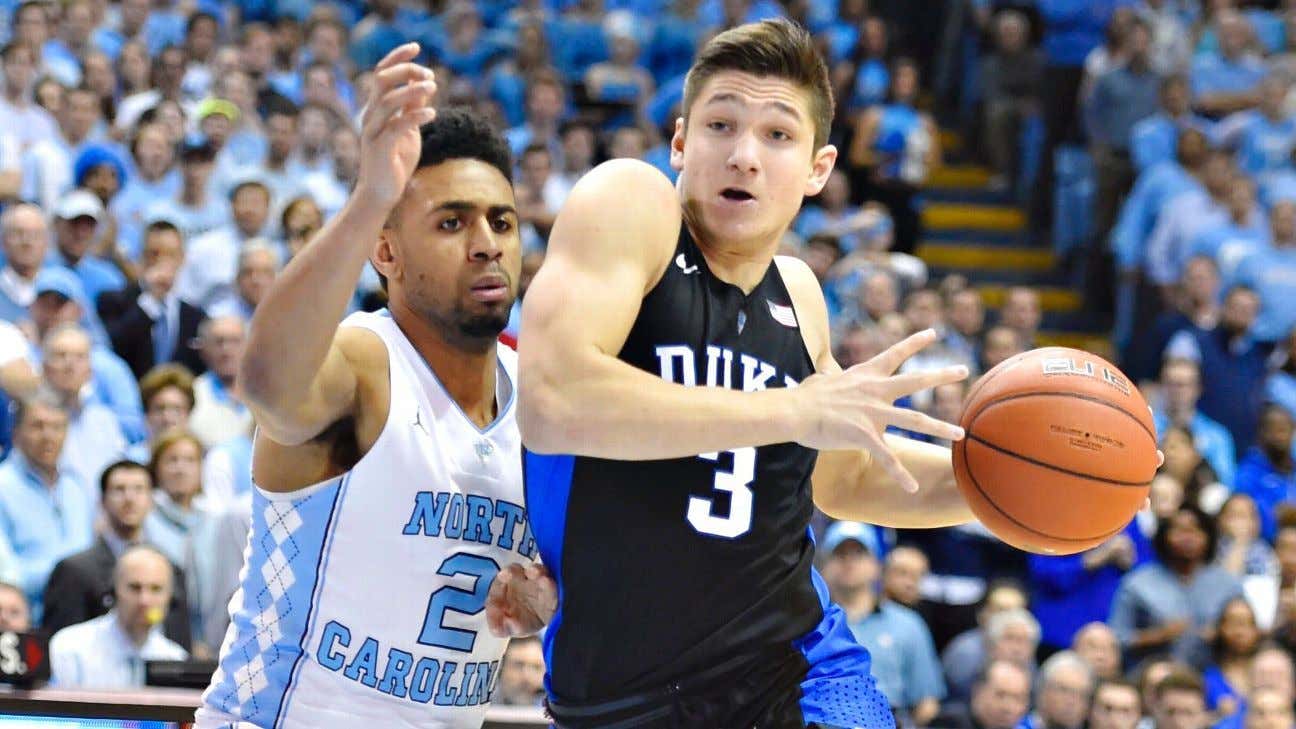 It’s officially preview season here at Barstool Sports. We’re less than a month away from games being played and your football teams might already be worthless. Last week we broke things down via lists – top players, coaches, jerseys, rivalries and more. This week it’s conference preview season. We’ll look at the major six conferences along with the AAC, A-10 and a mid-major preview. Disagree with anything? Let me know @barstoolreags

I don’t care what KenPom tells me or anyone else for that matter. The ACC is the best conference in college basketball again this year. There are a handful of national title contenders including the current Vegas favorite in Duke.

That said the middle of the conference isn’t nearly as strong as years past. The conference is very top heavy with Duke, Miami, Louisville, UNC and Notre Dame. Last year the conference saw teams like Wake Forest and Georgia Tech take jumps that weren’t expected. I’m not sure if we’ll see something like that again this year.

Five* storylines to watch in the ACC:

You have to talk about it. I’d prefer not to talk about the FBI, but it’s something that you have to talk about when you look at college basketball – especially the ACC. Two of the top three teams in the conference were named in the documents and possible pay-for-play scenarios. We already saw the fallout at Louisville with Rick Pitino and staff no longer there – now led by David Padgett. Will this linger over Miami this year? Will we see any possible sanctions in the middle of the season? Will any players be deemed ineligible after the season kicks off? These are all things to keep an eye on with the investigation still going on and the season starting.

2. A completely new look for UNC

North Carolina has been wildly successful under Roy Williams. A large part of that is due to the lineup and strategy Roy likes to run. The key is having a point guard who knows when to push tempo and how to properly run Roy’s secondary transition. No problem there this year with Joel Berry. The other key? Having bigs who are excellent rebounders. Roy likes his team to shoot 3s and grab offensive rebounds. The Tar Heels get some free points simply due to being a good offensive rebounding team. This year? The Tar Heels have to play small. They need to stretch teams out and hope that Luke Maye can improve rebounding. It’s going to be the first time we’ve seen Roy go small.

3. Does Duke solidify itself as the No. 1 team all year?

The same question was asked last year. Duke had lofty preseason expectations and then a weird mesh in terms of roster and an injured/not right Grayson appeared. They got hot during the ACC Tournament, but the constant question was ‘is Duke back?’ Duke is back this year. They have a legit point guard in Trevon Duval – the first since Tyus Jones. Grayson is healthy and there’s depth in the frontcourt including Marvin Bagley.

4. Will Notre Dame continue to be forgotten about?

Notre Dame is the Mike Conley of college basketball. Before he got paid Conley was consistently talked about as the most underrated player in the NBA. Notre Dame is consistently the most underrated program in college basketball. All Mike Brey does is finish in the top-4 in the ACC and make Sweet 16s. This year they are being overshadowed by Duke/UNC/Miami/Louisville, but they shouldn’t be. They return two very important pieces in Matt Farrell and Bonzie Colson – who is an All-American.

If you look at KenPom’s 2017-18 preseason ratings he expects Virginia to be a very good team. My question is just exactly who will this team be? Virginia was at its best when they had someone like Justin Anderson/Joe Harris/Malcolm Brogdon who could go get their own bucket. With the slow tempo, Virginia needs someone who can go get their own late in the clock. I’m not sold on Guy or Jerome being that guy this year, though I think you see a jump from both of them. Whether you read me or others people are all over the place in the thought process on where Virginia will be throughout the season.

So this news broke after I had already put this blog together but it’s still worth mentioning. Joel Berry is going to miss about four weeks due to a broken hand. This is absolutely devastating news for UNC. As I mentioned they are already having to change their style of play by going small now you have to throw in Jalek Felton or Seventh Woods to run the point. Having a point guard understand Roy’s tempo and secondary transition is key. Not to mention it’s not the easiest schedule for UNC to start either. The Heels play Bucknell (a very good midmajor), Michigan (a top-40 team) and Stanford (they have Reid Travis). It’s not certain if he’ll be back in time for the PK80 either.

All Bonzie Colson did last year was average 18 and 10 while providing one of the biggest mismatches on offense in the country. Colson will put those numbers up again this year, if not better. I honestly think his scoring will go up and you can see a 20/10 season – numbers that are hard to pass up for ACC Player of the Year. I’ve talked about how Brey likes to use NBA sets to find the mismatch for Colson; including bringing him up to the high post off of shallow rub cuts and letting him operate from there. Look for a lot of that this year.

Marvin Bagley might be the most talented player in the country this year, but his numbers won’t come close to resembling that. What Bagley will do is protect the rim and rebound like hell. He’s going to be one of the best rebounders in the country. If he can become consistent with his outside shot, he’ll make a push for Player of the Year.

Jim Larranaga is an excellent coach and possibly a better dancer. What he does well though is coach guards. Look at what he’s done with Shane Larkin and even Angel Rodriguez. He gets to coach some of the best guards in the country this year in Bruce Brown and Lonnie Walker. Throw in a couple athletic bigs and you’re going to see Larranaga come up with some really impressive sets.

1. Duke – Are you really surprised? I had Duke at No. 1 in the preseason top-25 rankings and they are the top here. I am a little concerned about the depth at the guard spot, especially the point guard spot, but this starting five is unreal.

2. Louisville – I know with everything going on people are down on Louisville. This is still a roster that has Deng Adel, VJ King and Quentin Snider plus a guy in Ray Spalding who can make a jump this year. They’ll get to play the same system under Padgett.

3. Miami –  I really like this Miami team. Bruce Brown is going to make All-America teams and news just came out that Lonnie Walker was cleared to play again after knee surgery.

4. Notre Dame – At some point you just have to put Notre Dame in the top-4 every year. I’m sick of getting burned thinking Notre Dame is going to be down at some point. Mike Brey is a top-15 coach in America and they have that Farrell/Colson duo. Keep an eye on TJ Gibbs who can make a major jump.

5. UNC – As I mentioned before I really am not sure how they are going to look going small. I trust them simply because of Joel Berry*, but they need to have a strong year shooting. If Berry returns to form after the injury they will finish in the top-5, if that broken hand lingers or anything they could fall to 7 or 8.

6. Virginia Tech – They do lose Seth Allen and Zach LeDay, but there’s still a lot to like with this team. Most notable Chris Clarke should be healthy. The player I really like though is Justin Robinson who averaged over 10 per game last year.

7. Virginia – They are going to defend. They are going to run the pack line and they will win games in the 40s. This is still a top-40 team nationally, I just need to see either Jerome or Guy turn into the guy for them. If they all stay healthy and compete they will be a top-15 team in 2018-19.

8. Wake Forest – John Collins made that team go. He was wildly efficient and could use him in that high pick and roll. They do still have Bryant Crawford who may be the most underrated player in the country. All he did last year was average over 16 points, 5 assists and 3 rebounds per game.

9. NC State –  Hiring Kevin Keatts was incredibly smart. He’s going to play uptempo and it’s a shame we don’t get Dennis Smith at NC State with Keatts. They get Al Freeman – a transfer from Baylor and have an intriguing big in Omer Yurtseven.
10. Georgia Tech – The Yellow Jackets were one of the surprises last year as they were a bubble team. They return one of the best defensive players in the country in Ben Lammers and have a guy in Josh Okogie who could be an All-Conference player.

11. Clemson – Yes they lose Jaron Blossomgame and you could argue Clemson wasted his time there as they never lived up to expectations or took advantage of having such a good player. This year they should be more balanced with the five expected starters averaging over 7 points per game last year.

12. Florida State - The Seminoles lose their best three players from last year including Jonathan Isaac. What they do have this year is freshman MJ Walker and a guy in Terrence Mann who should lead this team in scoring.

13. Syracuse – This wasn’t a good team last year and there’s not much to love about this year’s team. They lose Tyler Lydon, Andrew White and John Gillon. Tyus Battle is a solid player, but he’s not good enough to win a lot of games in this conference.

14. Boston College - This is going to be a weird statement so stay with me here for a second. Boston College has one of the best backcourts in the conference. Ky Bowman and Jerome Robinson combined to score over 32 points per game last year.

15. Pitt - This team is going to be so bad. Pitt fans have to be so pissed that they let go of Jamie Dixon only to bring in Kevin Stallings. They lose the top five scorers from a team that won 4 conference games.