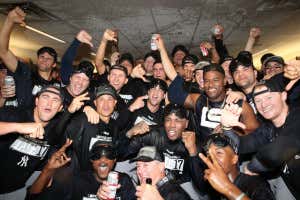 This morning stinks. After watching almost every game since the first day of Spring Training and going to 30+ games, it’s like something is missing. That’s really the worst part about being a baseball fan. It’s every day for 8 months of the year and then just like that, it’s gone.

After Game 5 I was so convinced that we were going to the World Series. I had my hotel booked and tickets to every game lined up because there was no was Verlander was coming back from throwing so many pitches in game 2 AND Charlie Morton were going to beat us. Until they did.

There is no excuse for losing those games. “Rebuilding” went out the window a while ago and even though many of these guys are young, they’re big league players and should have played better. Unfortunately, the Astros are a better team right now. As the season went on, The Astros have been the measuring stick and back in May I wrote:

The Yankees just dropped 3 of 4 to the Houston Astros, which included Tanaka getting shelled last night on Derek Jeter night, but it’s not time to panic yet. Partially because we’re in first place, but also because the Astros are a measuring stick for the Yankees this year and now we see where we come up short.

Cashman went out and strengthened the lineup while picking up pitching, but the Astros just went out and loaded up themselves by getting Justin Verlander, who totally reinvented himself in the 2nd half to get back to being dominant. Now with a pennant to confirm it, Houston will continue to be the measuring stick for a while and it’s our job to chase them down and even though we fell short, I still love this team.

In 1995 I was 10 years old when the Yankees lost in 5 games of the ALDS to the Mariners. At 10years old you don’t really know much, but you’re starting to become sports aware. Obviously, the Yankees went on a great run from there and won 4 World Series right away while becoming dominant every year. This 2017 team feels like that 1995 team.

We have a young core that is going to be a part of something special over the next couple of years. We have veterans that helped get us here, that won’t be back. Most importantly though, we have a fanbase that is reinvigorated and ready to head out to the stadium day in and day out to support these guys and whoever joins them along the way. As someone who lives and dies with this team, knowing how excited the fans are again and hearing the stadium rocking during the playoffs will make pitchers and catchers get here quick. Then we get to fall in love all over again, with the 2018 Yankees.

PS: Congrats to Tex and Houston. Having lived through 9/11, I know how much the 2001 World Series meant to NYC. With Houston going through all they have, and seeing the heroics that Tex displayed during that time, no one deserves it more.

PPS: A lot of the Yankees are posting on this new app now. Weird to see them be early adopters of a new platform but it’s something to watch as this team gets younger.