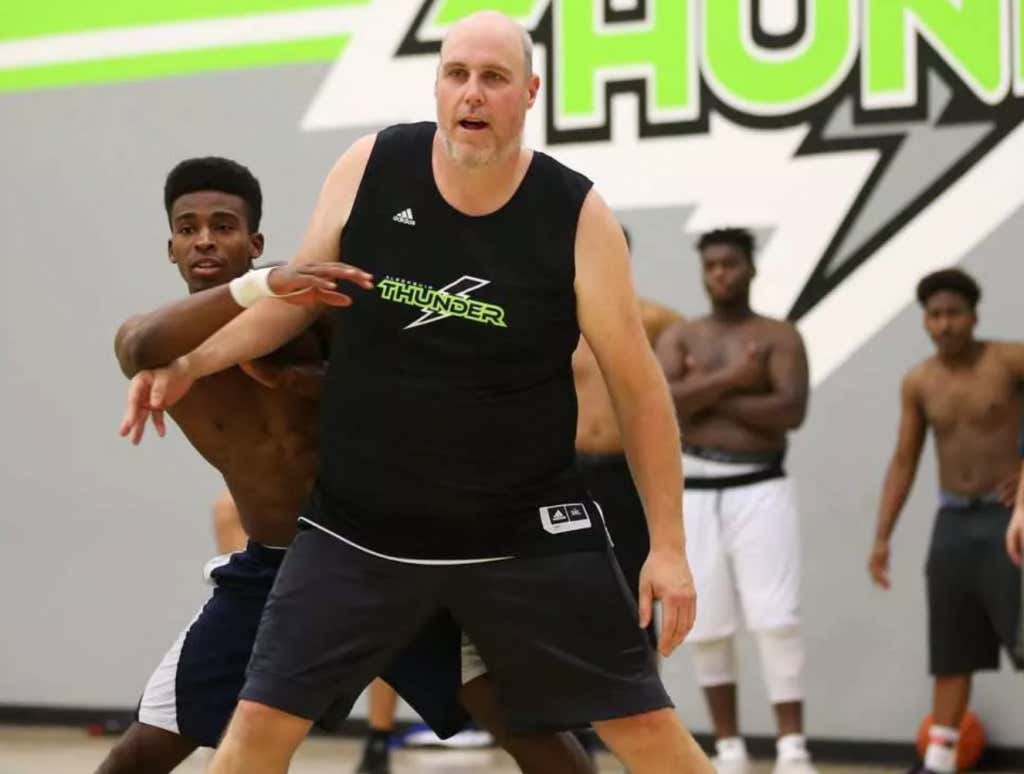 OTTAWA CITIZEN – About six months ago, Trevor Costello, the wiry coach of the Algonquin College men’s basketball team, was refereeing an alumni tournament in Hammond — “out in the sticks” — when one player caught his eye.

He was a mountain of a man, balding with grey stubble, but equipped with court smarts. And Costello wondered, crazily: could this aging giant be lured to play for the Algonquin Thunder?

A hint was dropped and it set Dan Stoddard on a mission, the fulfilment of a dream he’d set aside in high school. “C’mon. I’m 38 years old, going to be 39 in November. I’m absolutely out of my mind, right?”

Yes, 38 and, at the time, six feet, eight inches tall and weighing 380 pounds, with a full-time job at OC Transpo, two teenage kids at home and a house in Russell that needed new siding.

He showed up for tryouts with about 55 other players — now about 50 pounds lighter — and promptly made the team. “Well, it’s awesome,” said Costello. “The guy made it happen. He just made it happen.”

Incredible.  What an inspiration.  Old Man Dan the 38 year old 380 point bus driver down in the low post for the Algonquin Thunder.

This is how I picture a lot of the old-school Barstool fans who have been following Pres since the newspaper days.  This is who I imagine all of the newer younger Stoolies will grow into someday.   Fat, bald, out of shape, job we hate, playing pickup in the gym with 9 knee braces on after work.  We’re all headed there someday.  We can either roll over and left life trample all over us or do what Old Man Dan did and turn back the clock.

He showed up for tryouts with about 55 other players — now about 50 pounds lighter — and promptly made the team. “Well, it’s awesome,” said Costello. “The guy made it happen. He just made it happen.”

There he was at practice one night this week, all 320 pounds, doing suicide sprints, setting picks, running offensive drills and blocking shots. Around him ran 20 younger players, some tattooed, some wearing black compression tights, some with paintbrush hair-tops, most with chests lean as plywood.

“We played an exhibition game against last year’s national champs,” he said Wednesday, cooling down after practice. “I scored a basket, they called out my name (on a loud speaker) and I could have cried on the floor.”

Truth be told there is absolutely zero chance I have the willpower or energy to do any of this but I hope it serves as an inspiration for at least some of you.  Don’t just lay down and die when you turn 40.  Run some suicides and drop 6 and 4 for your local college squad.

Point guard Ernest Tolete, 23, was a little mystified when Stoddard turned up for tryouts. “To be honest, I thought he was a friend of Coach’s, just coming out to run with us.”

[VIA THE OTTAWA CITIZEN]