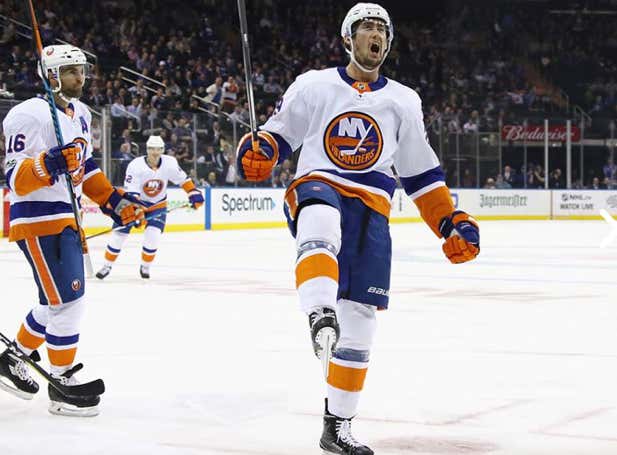 Much like the rest of this young season, last night’s shootout win at MSG was full of exciting moments, goalies coming up big, and a whole lot of inconsistencies peppered in.

We saw the leagues 2nd-best worst powerplay finally break the slump and is now at a wopping 4.3% conversion rate, which is how we say, not good. I said last week this team’s man-advantage is so bad it can only improve so I guess in some weird way I was kind of right? You be the judge.

And on the topic of the unexpected, Brock Nelson continues to score [his 5th of the year mind you]. I swear it’s all he does. This whole thing started as a joke but it’s getting real now. All Brock Nelson does is score goals.. it’s amazing and sad at the same time.

It’s really all he does, it’s amazing

On Barzal, the kid was flat out the best player on the ice last night, though thats not to say he was perfect by any means. In a game where both teams had their fare share of sloppy plays, Barzal did enough good to clear his name from all the other bad. Outside of notching his first career NHL goal [On Hank of all people] Barzal was smart with his speed and was putting himself in the right spots to contribute from start to finish.

Dougie even mentioned that there were moments where he was a little too excited [something I’ve been noticing from both he and JHS this year] but outside of a few overzealous passes, Barzal had his best performance to date and showed Isles fans just how good he can be when things are clicking. Last night will prove real beneficial for the youngster going forward. [It makes me sick that I’m now old enough to call pro athletes “youngsters” but thats neither here nor there]

For a game that ended 4-3, last night was really about the goalies, and who could continue to make the saves that mattered. Both Halak and Lundqvist had goals against that’ll stay in the back of their head for a few days, but it was the saves they did make, and when they made them, that won and lost the game last night. Whether it was Halak in the 3rd period or Hank in the 2nd, both goalies made saves at the right times that kept their teams in the game, eventually allowing it to be decided in a shootout.

Halak has been off to a rocky start this year but is still doing enough to collect points, so I guess you can’t really be upset with him through 5 starts, but then again when am I ever really mad at these guys. Forever optimists for the win.

Speaking of rocky starts, JT scored a real life shootout goal last night and it was a dandy. I love when JT scores in the shootout because 1. it shuts everyone single one of us up for always roasting him in shootout/penalty shot situations, and 2. it gives us highlights like this one:

In this week’s addition of “Not Sure If Cappy Or Dougie” we saw JHS benched for both the 3rd period and OT because of poor decision making, and in some sort of crazy coincidence the team just could not get any possession going from there on out. Not saying just saying. I get that JHS is young, and hasn’t really proved himself, but when your team is floundering in their own zone, and in desperate need of offense, mayyybbeeee play the kid with good feet and better hands. Just a thought.

Finally, Pulock got his debut and did, well, not much. A few good plays on the back end and one very, very underwhelming go with the 1st powerplay unit in OT sums up his night. Much like the team as a whole, it was a good not great night for Pulock, but I’d expect him to build off of his performance. Simply put, I didn’t see anything that has me worried about the 6 games he spent in the press box. Pulock is going to be good.

All in all, this team was lucky to escape with two points. And, much like the rest of the year, the good just barely beat out the bad, and though there’s a lot that still needs to be corrected with this roster and the hockey they’re playing, they’re collecting points early on, so I’ll take it.

On to San Jose.