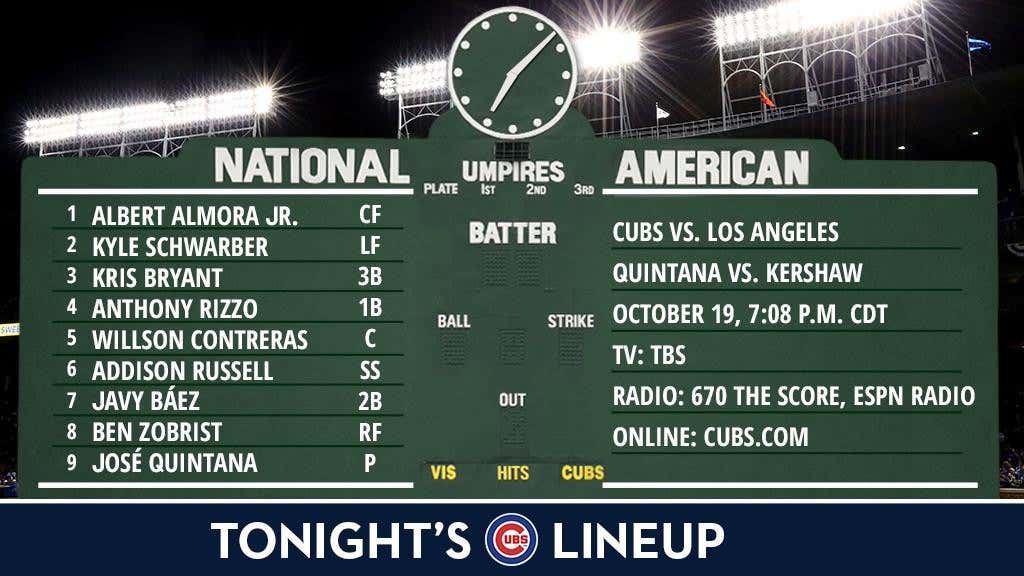 I had a simple message for Cubs fans following Game 4’s dramatic win:

And I have the same simple message today. It’s Cubs in 7 and I honestly don’t know if there’s another realistic outcome.

Sure, the Stat Guys say the Dodgers have a 94% chance of winning the series. They say Clayton Kershaw is one of the best ever because Numbers. That the Cubs can’t hit this postseason because, again, Numbers. That even the Cubs’ bullpen blows regardless of Numbers.

In other words, I think those guys are full of shit. I think they don’t know our guys. I think they’re haters that don’t know that Anthony Rizzo loves being down 3-1, or that Javy Baez hits yabos in clusters or that Albert Almora is an emerging superstar. They don’t know that this team is unstoppable when cornered. They don’t see the magic because they don’t believe in the magic. It’s like Polar Express at the end when Santa gives the kids the bell and he’s like you gotta fuckin believe in me to hear that bell kids. If you don’t believe in this team, you’ll never truly witness the magic. You’ll never hear the bell.

But never mind that shit. I don’t have time for classic childhood christmas stories and people that believe. I only have time for game 5 because I’m riding Cubs in 7 HARD. Clayton Kershaw has a 5.45 ERA in his last 11 postseason starts. He’s given up 5 dingers in 11 innings this October. He was sitting low 90’s on Saturday and looked extremely uncomfortable. If I’m correct, and I should be on this one, Wrigley’s atmosphere will be slightly different than Dodger Stadium. And on a related note, Kershaw has never eliminated a team from postseason play. The Cubs are 5-0 in their last 5 elimination games. That includes, comparatively, a 3-1 series deficit with game 5 at home. As my internet sensei Big Cat would say, Hmm.

With all of that said, I’m going with my gut here and saying Javy Baez stays hot and hits some missiles tonight. Willson Contreras looks locked in as well. Personally I think we all know Kris Bryant is playing at about 50% right now but you have to imagine that big handsome donkey is due to run into one or two sooner or later. Whether or not he does though shouldn’t matter because I think everyone with two brain cells and some Cubs’ bias knows that Jose Quintana is about to throw the game of his life. He was solid against Washington. He was solid in the WBC with his flag on his hat. And I think he’s going to be solid again tonight to the tune of 8 innings of brilliant baseball.

Believe me now. Hear me later. Whatever you want to do. I honestly      do     not      give      a       fuck.  Neither does anyone in the Cubs organization right now because our guys got this. If anything you should probably just lighten up and enjoy the fact that the Cubs are about to beat Clayton Kershaw at home in the NLCS. Again.